Behind the Curve (Pt. 2) Who Will Patrick Corbin Be?

D-backs Have Little Room to Maneuver for 2014 Payroll

We know from Nick Piecoro of the Arizona Republic that the 2014 payroll could top the $100 million mark for 2014, but as Piecoro also explained, a jump in payroll of $10-15 million would get largely eaten up by increased salaries for players already on the team.  Consequently, GM Kevin Towers may need to subtract if he adds on the trade market, and Arizona is an unlikely suitor for some of the bigger-ticket free agents this season.

I agree with Piecoro that RP Tony Sipp is likely to be non-tendered this offseason due to the raise he is likely to receive in his second year of arbitration.  He just hasn’t been good enough (-0.2 WAR in 2013) to justify paying him more than internal options who would pitch at or near the minimum, like Joe Paterson or even Eury De la Rosa.  If anything, it’s Joe Thatcher who represents the tougher non-tender question (although Thatcher would be more expensive in arbitration than Sipp).  And it may be that neither Sipp nor Thatcher gets tendered a contract — as Jeff and I expect to explain in the near future, it is likely that Towers will target a lefty reliever in a trade. 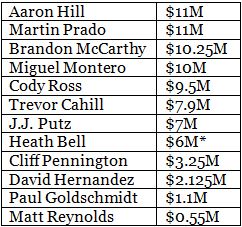 I can’t look at this and not write that Goldy is an amazing bargain, even if next year’s salary is more of an advance than a simulation of market value (he would not have been eligible for arbitration for 2014).  Also worth mentioning is Reynolds, who would have been eligible for arbitration had the D-backs not signed him to a guaranteed contract for injury reasons.  In exchange for the 2014 money (and it is possible Reynolds could pitch at the end of the year, even though Arizona is likely to be careful with his recovery), Arizona holds a $600,000 club option for 2015.

All told, that’s $79.675M in guaranteed money for the 2014 payroll.  There are also six arbitration-eligible players under club control, including Sipp and Thatcher.  Here they are, with their 2014 arbitration years and their 2013 salaries:

I’m not certain whether Ziegler or Parra will have the higher 2014 salary.  Parra’s case is extremely complicated, and Ziegler’s is not much easier to hash out.  Ziegler has generally been solid and reliable, and while his strikeout rate is pedestrian or even below-average (5.42 K/9 in 2013), his ground ball rates have been prolific (70.4% in 2013).  It’s considered a plus when a pitcher has a GB% above 50; among the 326 pitchers who threw at least 50 innings in 2013, only nine pitchers had a GB% above 60.  Ziegler was the absolute best, and only one other pitcher (St. Louis’s Seth Maness) had a GB% above 64.

Ziegler’s case should be helped by the ground balls and by his stint as closer this season.  Further complicating matters is that Arizona may prefer to work out a longer-term extension; while Ziegler has a realistic shot at comfortably more than $4M through arbitration ($4.5M?), the club could coax him into taking a little less in return for guaranteed years.  Ziegler is no spring chicken at 33 years old, but conventional wisdom would say that losing a tick off of his fastball would affect his performance less than it would most other pitchers.  $10M for three years would be a coup for the D-backs, but an average annual value in the $4M range is also possible.  Let’s assume that Ziegler makes just a touch less than $4M for 2014 (I’ll call it $3.75M).

Part of why I’m putting Ziegler at below $4M is that if the D-backs do work out a deal for longer than one year, they are likely to try to push some salary to subsequent years, as Piecoro noted in the piece linked to at the beginning of this post.  The (very sound) reasoning is that Putz and Bell will be off the books in 2015.  Of course, the same principles could apply with respect to Gerardo Parra, in particular because if Parra signs an extension, it is likely to be for more years.

I think Parra’s arbitration case would be one of the most fascinating on record, to the point that I’d rather write a separate post about it.  When I write that up, it may be by channeling the representatives for both sides, in turn.  I could argue that Parra can command only a $3.5M salary for 2014 with a straight face; the argument for close to $6M is also not ridiculous.  And then there’s the whole question of how an arbitrator would view Parra’s defensive skills, which are such a big part of his value.  In case you missed it, Parra and Andrelton Simmons shattered the previous record for Defensive Runs Saved (34) by each notching 41 this year.  And if Parra gets compared primarily to right fielders, his offensive numbers are going to look dismal.

For purposes of determining how much room Arizona has in the 2014 payroll, let’s assume Parra makes $4.5M in 2014.  As I’ve noted, this number could climb quite a bit — but it could also be lower than that, if Arizona pushes in arbitration or if Parra signs a long term extension.

Josh Collmenter also presents an unusual arbitration question; his numbers as a starter will not help his case, but long relievers who excel are few and far between.  I have been unable to find a good comparison case, and first year arbitration awards are often far below market value.  Let’s use $1.5M for Collmenter.

Even in the most disastrous of circumstances, baseball arbitrators are not able to award a salary more than 10% below the salary the player received in the previous year.  And while neither Sipp nor Thatcher was good in 2013, they would receive raises, not cuts (one is only likely to see cuts for players likely to miss the entire season).  Let’s assume that Sipp gets non-tendered, but that Thatcher ends up with a contract around $2M.

That bit about cuts may apply to Daniel Hudson, but I haven’t been able to find an example of a first-time arbitration player receiving a cut from their pre-arbitration salary.  And while it’s likely Hudson may miss the whole year, it’s very possible we’ll see him in uniform in 2014 (perhaps in the bullpen to end the season).  This is a situation ripe for a pre-arb deal.  I’m just guessing, but I think Arizona will probably have to agree with Hudson in the $0.8M range, rather than settling on a contract similar to that of Matt Reynolds (although the Hudson contract could also include a 2015 option).

I have the arbitration-eligible players (Ziegler, Parra, Collmenter, Thatcher, Hudson) at $12.55M total for 2014.  Add that to the $79.675M in guaranteed contracts, and we’re looking at just over $92M now — a number that could sink back to $90M if Arizona decides to non-tender Thatcher.

Of course, those aren’t the only player salaries the team will carry on its payroll in 2014.  Quite a few will make around $500,000.  On the pitching side, that will definitely include Patrick Corbin, Wade Miley, Randall Delgado, and Will Harris.  Tyler Skaggs, Archie Bradley, and Zeke Spruill will almost certainly get added to that list, and we can expect a handful of others, whether we’ve seen them before (David Holmberg, Eury De la Rosa, Charles Brewer, Chase Anderson) or not (Jake Barrett, Andrew Chafin, Anthony Meo).  Let’s say there are eight pitchers likely to make the major league minimum, or $4M worth.

There are also several position players who have near-definite spots on the 25-man roster in March: Matt Davidson, A.J. Pollock, Adam Eaton, the recently-acquired Matt Tuiasosopo and either Didi Gregorius or Chris Owings.  The second of the shortstops could get added to the roster, and we could see a new face as the season progresses.  Let’s call it six position players at the minimum, for about $3M.

Just one other consideration for the 2014 payroll — while I’m not guessing at acquisitions (this post will serve as a reference for that type of thing, later), and I’m leaving off departing free agents, the team does need a second catcher as a backup for Miguel Montero.  Wil Nieves is a free agent, but despite his good batting average this year, I think he could be signed for around his 2013 salary of $800,000 (and I do think he ought to be brought back).  Add that salary to the till.

So there we have it — even if the D-backs plan to increase payroll to $100M or so, that doesn’t leave us room for acquisitions.  The team has room to pay for the players it controls — but nothing more, unless the payroll climbs beyond $100M.  This offseason, we have to assume that to add salary beyond the players discussed above, Towers will have to subtract, almost equally.