Marcus Wilson, Jamie Westbrook and Others Turn Heads in Spring Camp Double Plus: Setting the Middle Infield Without Brandon Drury

Go to Chase Field this April, and you may notice some sliders missing. In addition to that glaring omission from the stadium menus, Patrick Corbin may be throwing his best pitch less often — and “throwing his best pitch less often” doesn’t exactly sound good. Corbin has had a lot of his success by limiting his fourseam usage in favor of a sinker, and by throwing that slider, which has been oh so dominant in his young career. Against Corbin’s fastballs, opponents have had slugging percentages that fall 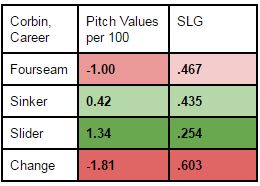 somewhere between “Ender Inciarte” and “A.J. Pollock,” and against his changeup, they’ve slugged at the “Paul Goldschmidt” level. But against the slider… no one on the D-backs had a slugging percentage last year that we can compare to the .254 that opponents have slugged on Corbin’s slider. It’s been tremendous.

So (and I mean this in every way), why the change? At first, the decrease in sliders was styled mainly as an increase in changeups. From MLB.com’s Steve Gilbert, a couple of weeks ago:

This year, though, Corbin plans to change things up a bit as he intends to use his changeup more.

“My changeup is probably something I’m trying to get to where I can throw it as much as my slider and rely on that pitch when I’m in jams or trying to get ahead,” Corbin said. “It’s another pitch I want to show lefties and righties to keep them off my slider and fastball a little bit.”

In one respect Corbin is a different pitcher than he was in ’13. That season he used his changeup just 9.98 percent of the time, relying primarily on his fastball and slider. But he’s wanted to protect his elbow by throwing fewer sliders so the changeup has become a bigger part of his repertoire. He’s used it 16.49 percent of the time in spring training – comparatively, he’s thrown his slider 14.43 percent of the time – and it’s become an effective complement to his hard stuff.

As it happens, Corbin has made four starts this spring that were tracked by PITCHf/x, so we have more data for him than we do for most other D-backs pitchers. And he definitely has thrown his change more: 16.5% of the time this spring. It’s also true that Corbin’s slider usage has gone down, to 14.4% this spring in those four starts — a pretty steep drop off of his 28.9% usage in 2015, and less than the 22.8% of the time he used it in his very good 2013 season.

When you’ve written about something before that comes up again, it immediately sparks some interest. In late 2014, I wrote a piece that has stood up pretty well in context, about how good Corbin was likely to be when he returned. The key takeaway was that Corbin’s slider appeared to be a big part of his success in 2013, but I also found the 43 pitchers who threw sliders who had had Tommy John surgery between 2008 and 2012 (to capture only pitchers who had PITCHf/x data before and after surgery), to look at how their slider usage changed.

The results were surprising. The average slider percentage before surgery was 17.37%, but the percentage after was 17.41% — no drop at all. Weighting each pitcher’s percentages by the pitch counts used, the relationship was basically the same: 18.64% before, and 18.61% after.

There was a ton of variability. 25 of the 43 pitchers saw their slider percentage change by more than 5% of usage (e.g., a rise from 20% to 25.5%), but the differences went in both directions; 20 of the 43 used their slider more frequently when they returned, the other 23 using the slider less frequently.

Change quite a bit it did. Instead of throwing the slider less often in 2015 as he worked his way back, Corbin really doubled down — that 28.9% usage is extremely high (anything over 20% is pretty high for a starter). Sliders don’t tend to fare as well against opposite-handed hitters, but in addition to throwing it a mind-blowing 44.9% of the time to lefty hitters, Corbin still threw it a meaty 24.4% of the time to right-handed hitters. It worked; righties slugged just .306 against the pitch, far lower than his other pitches (all between .517 and .550 slugging). Lefties had a hilariously rough time against the pitch despite seeing it so much, too: .257 SLG, as if anyone who swung at it belonged in the low minors.

It’s not that Corbin’s other pitches have been bad, because they haven’t been. But over three major league seasons, a few general rules emerge:

I pulled out Corbin’s slider usage for all of his MLB starts, to see how connected that’s been to his success overall. I used his Bill James Game Score for each start as my metric for “success.” Game Score starts at 50 points, giving positive credit for all outs, especially strikeouts and outs after the 4th inning; walks, hits, and runs affect a score negatively. For context, Corbin has averaged a Game Score of 53.4 over his career (65 starts), averaging below 50 in his first season (48.2), and above it in 2013 (56.5) and 2015 (52.9). In the magical part of 2013, before the wheels came off in his epic Philadelphia blowout in late August that year (which had a 21 Game Score), Corbin had averaged a Game Score of 62.3 in 25 starts.

If that makes sense to you, I either really want to meet you or I really don’t (you let me know). So let’s try that differently:

Proof of correlation is not proof of causation, and the point at which numbers like the above (from 0 as no correlation, and 1 as a perfect correlation) become significant depends a lot on the sample size itself. I’m not doing a regression analysis here. But a few of the numbers do start to look like they represent connections, and if you take that on faith for just a moment, they can help us see how much they might be connected.

Before his Tommy John surgery, Corbin’s slider usage did seem to have a lot to do with his success; that’s the most significant correlation of the 12 in the table. Some of it was likely coincidental, and there are many lurking variables, I’m sure — a big one being that Corbin’s slider usage would go up against lefty-heavy lineups, and he’d be more likely to have success in that situation. But generally speaking, it looked like nearly half of Corbin’s success (or failure) could be attributed to how much he threw his slider, and that’s huge.

The thing is, when he started throwing it a whole lot more in 2015, the correlation was nearly as strong — in the opposite direction. Why? We know that the slider still performed very well, so this is surprising on some level. Just tossing it out there, but since Game Score rewards long outings, the slider might have worked against it here, since Corbin wasn’t really on an innings count, but a pitch count of about 90 pitches. The slider is a strikeout pitch for Corbin; hitters miss it. It stands to reason, then, that the more he threw the slider, the more likely it was to have hitters in strikeout counts, or to extend plate appearances by throwing it earlier in counts. In other words: the more he threw the slider, the shorter Corbin’s outing was likely to be. That worked against his Game Score, but not necessarily against his success on a batter-per-batter basis.

Back in that study a year and a half ago, pitchers were split almost half and half: many increased slider usage, and many decreased it. Corbin’s kind of done both, now: he increased it in 2015, but now he’s looking to back away from it. I’m not sure that a changeup is the answer; although the correlations were weak, the correlation between changeups and Game Score was negative in every year (which could be a function of throwing it more against righty-heavy lineups). Still, as he’s indicated to Gilbert and Bordow, throwing changeups earlier in games could look a lot different, and until we see that happen, we’re not necessarily going to be in a position to cast judgment or even speculation. I’m not exactly offering optimism here, but Corbin’s transition away from sliders and toward changeups should be a really fun thing to watch for.

One Response to Patrick Corbin and Fewer Sliders

Leave a Reply to Double Plus: Following Up on Corbin’s Changeup | Inside the 'Zona Cancel reply