Smoothing Out the Seams: Fastball Woes Weighing Down the Rotation

In case the secret isn’t out yet, Diamondbacks starters have had a bit of a rough go of things to start the season, with home runs allowed serving as the main bugaboo – 17 allowed by the starting rotation in their first 19 games. As Ryan wrote about after the team acquired Shelby Miller, the mix of his fastballs has been an important feature in his repertoire. The same could be said for many of the team’s starters considering how often they use fastballs – they’re second only to the Marlins in two and four-seam usage. However, fastballs have been mixing about as well as baking soda and vinegar for Diamondbacks starters thus far.

For a team that relies so heavily on on four-seam fastballs and two-seamers, it may not be that big of a surprise to find that most of the damage incurred has been done on those fastballs. 64.7% of the home runs allowed by the rotation have come off of two-seam or four-seam fastballs. Pitches that the starters are throwing 62.6% of the time. While this may seem commensurate, it’s a bit tough to say there isn’t some small sample size variance in play. After all, one can’t, on the surface, assume that all pitch types are equally likely to be hit for home runs. Zack Greinke can easily attest to this. Since 2007 (as far back as PITCHf/x data goes on Fangraphs), Greinke has a HR/FB rate 5.5% lower for his four-seam fastball than for his slider. And while home runs hemorrhaged may be the most apparent failing for Diamondbacks starters, they’ve allowed quite a few hits in general off of their heat.

Though hardly a predictive measure, looking at specific pitch values can help us understand just how bad these results have been. Coming into Sunday, Diamondbacks starters were a combined -14.2 fastball runs below average – this includes only the aforementioned two and four-seam fastballs. Put into a rate stat (wFB/100) for easier comparisons, for every 100 fastballs thrown, they have culminated into being -1.36 runs below average. How bad is that? It would tie the team’s worst month last year, September, in regards to wFB/100.

This negative value can’t solely be assigned to the plethora of home runs being spotted. With the exception of Robbie Ray, who had been a consistent bright spot until Sunday, each starter has seen their fastballs hit often and hit hard. As the following chart shows, very few of the at bats ending in two or four-seam fastballs have ended well. 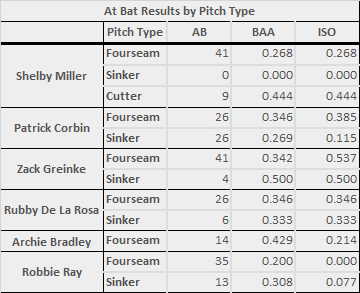 Data from Brooks Baseball which lists two-seam fastballs as sinkers.

It may be some un-fun with small samples, but it seems clear that the largest area for improvement going forward for the starters is with the fastball. These problems, and ensuing adjustments, however, do not lack precedent. Most people would agree that Zack Greinke had a decent 2015 campaign. Over his first month last season, however, he had a few mistake fastballs in similar, if not the exact some, locations he’s had them so far this April. 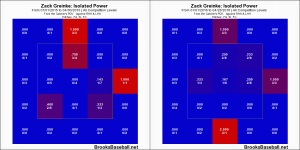 But wait, there’s more. Going back to wFB/100 for a moment, Greinke, Corbin, and De La Rosa all had sub-par results with the fastball in their first month of pitching in 2015 and went on to improve from then on. Now, before you cut, paste, and e-mail me my comment about pitch values not having particularly predictive value, this is only to demonstrate that these poor fastball results and subsequent improvements aren’t without precedent for any of those pitchers.

Perhaps the one exception to this optimism is with Shelby Miller, though for different reasons. As Ryan touched on this past Thursday, Shelby is down from averaging 21 two-seam fastballs/sinkers per start in 2015 to throwing just one in his first three starts this year. In fact, his four-seam fastball usage has spiked from just about 33% with the Braves last season to over 62% this season. Add in his bamboozling run-ins with scraping his hand against the mound and there is reason for concern.

The small sample size disclaimer really cannot get thrown around enough in April but already some trends from seasons past are recurring. Until adjustments have been tried and failed, there isn’t too much reason to worry at this early of a point. Nonetheless, new trends like Shelby Miller’s ditching of a pitch that was a part of the crux of his success should raise a few caution flags.

One Response to Smoothing Out the Seams: Fastball Woes Weighing Down the Rotation