Breaking Down Vidal Nuno’s Debut, Inside the ‘Zona Style With the Season Lost, How Should the D-backs Align Their Outfield?

Evidence Suggests David Peralta’s Hot Hitting Could Be For Real

After skipping Triple-A Reno completely, David Peralta was called up on June 2 to replace A.J. Pollock on the active roster, hitting .325 in 131 plate appearances. His extremely unusual case, though, makes it difficult (but not necessarily impossible) to tell whether his scorching start is for real.

How unusual? Consider this: like fellow Venezuelan Gerardo Parra, Peralta started his professional career as a pitcher. As noted in this Nick Piecoro piece, Peralta doesn’t regret starting his career that way, as it had seemed at the time like his fastest path to the majors might be on the mound. But after struggling through parts of two seasons with Rookie-level Johnson City of the Appalachian league, Peralta developed shoulder problems. It looks like he simply wasn’t able to make it back. Although he pitched his last inning for the Cardinals organization in 2007 in his age-19 season, it wasn’t until May 5, 2009 that St. Louis released him.

As far as I can tell, Peralta played no organized baseball whatsoever between that last fateful inning in 2007 and when he resurfaced more than three years later with Rio Grande Valley of the independent North American Baseball League in 2011. That’s an eternity in baseball terms, and it helps obscure who Peralta really is.

Say what you will about independent ball, but all Peralta’s done as a hitter in the last four seasons is tear the cover off of the ball. Take a look at this and judge for yourself:

.297 is the lowest batting average in six stops. And his current OBP and SLG marks are the lowest in his professional career as a hitter. But it’s very difficult to tell what to make of his independent league time; in his first two seasons, he was more than 3 years younger than the average player in those leagues, but the level of competition is hard to track. With Wichita, Peralta’s batting average was the 6th highest among all players with at least 300 PA. Before he was plucked out of the American Association by the D-backs organization, Peralta amassed just 194 PA with the Amarillo Sox, but his .352 batting average there tied for 3rd in the league, only just behind the leader (.357).

Peralta’s independent league time doesn’t really prove anything, because it’s hard to nail down quality of competition. But it’s telling that when Peralta came over to the minor league system, he was plugged right in at High-A, with only his slugging mark dipping thereafter. Maybe we can treat his American Association stats as Low-A stats, but even then, the age factor obscures a lot. At Visalia, Peralta was suddenly quite a bit older than his competition: more than 2 years above average. This was also true with Double-A Mobile in the Southern League this year (1.4 years older than average). And it’s probably fair to note that the average prospect is younger than average for the league at any level in the minors.

Maybe all of Peralta’s minor league time doesn’t prove much, except this: the man can hit. Yes, he beat up younger competition. But we know his progress as a hitter probably matched what would otherwise have been an aggressive assignment had he not pitched first, and when a guy is one of the best hitters in his league, it can be true that his talent level is much higher.

Hitters gonna hit. Peralta had just 219 PA with Visalia, but his .346 average led the league. The number 2 guy hit .337 (and that man, Zach Borenstein, is now in the D-backs organization as of last Saturday). Jake Lamb was 15th, hitting just .303. Make no mistake, Peralta was a stud from the moment he signed up to play for Arizona.

In discussing Borenstein when the Thatcher trade came through, our Jeff Wiser had this to say:

Zach Borenstein is an outfielder in the high minors who’s had success very recently, being named the Angels’ minor league player of the year in 2013 after he slashed .337/.403/.631 in 112 games at High-A Inland Empire. He slugged 28 home runs and earned himself a trip to the Arizona Fall League where the then-22-year old struggled. Now 23, he flailed in AAA before being demoted to AA Arkansas. Anaheim tried to skip him over AA and it didn’t work.

Borenstein is three years younger than Peralta, but his similar statistics in the High-A California League didn’t translate to Triple-A, apparently. Peralta has never played there, and merely did well with Mobile (his .839 OPS there still ranks 17th in the Southern League). This year, has Peralta turned it on in The Show — but because his batting average on balls in play (BABIP) is quite high (.365 — league average is .301), there’s some question of whether Peralta has just been lucky. Let’s take a look at his body of work at the plate with the D-backs to try to gain some insight.

We looked at this on Wednesday, when examining the D-backs’ soft-hitting offense. Thanks to our association with ESPN, we can bring you their proprietary “Hard Hit Average” statistic (thanks, ESPN Stats & Info!), which basically tells us how frequently a player really hits the ball on the screws. It’s per at bat, too, not per batted ball, and so the fact that the Detroit Tigers have a HHAV of .183 as MLB leaders should tell you that players don’t hit the ball on the screws that often (the Tigers have one of the lowest “Soft Hit Averages,” but at .394, it’s twice as high as that team’s HHAV). For more context, the D-backs as a team have a .144 HHAV (24th in MLB) and a .420 SHAV (tied 15th).

Peralta’s major league HHAV is now .183, good for fourth on the D-backs (see Wednesday’s post for the leaderboard). That puts Peralta right at the 90th percentile mark for HHAV (also .183). In other words, Peralta is in the top ten percent in major league baseball in terms of the rate at which he hits the ball on the screws.

And even in a small sample, that tells us something. Think about hitting in terms of dimensions. One dimension is timing. Get out front of a changeup or behind a fastball, and you’re not going to hit the ball into play. You’ll foul it off, or miss it completely. HHAV depends in part on swing speed, but it’s our best way to capture the horizontal dimension — did the batter “sweet spot” or “barrel” the ball? Teams have Hitf/x to tell them more about that, but that’s not released to the public, and HHAV is a pretty good substitute. Anyone can hit a pitch in off the plate — but only a few hitters, like Paul Goldschmidt, can hit those inside pitches with the barrel, rather than the handle (more on that part of Goldy’s game here).

Another dimension is loft — if you’re slightly over the ball, you’ll hit a ground ball, under it a fly, really under it a pop-up, etc. We use batted ball rates like Line Drive Percentage as our best estimate of that (although there is just a dash of batted ball velocity to the LD determination, too). I’m not aware of any study that takes HHAV and comes up with any kind of “hit expectancy” number, but we have that for batted ball rates. Line drives become hits at a 70% clip, far ahead of the other types of batted balls (all of which turn into hits at a 20% or lower rate).

Here’s the thing: Peralta’s line drive rate isn’t actually that good. It’s 17.8%. The league average this year for non-pitchers is 20.6%, and in my experience, the vast majority of hitters seem to be within a few percentage points of that mark in full seasons. This season, Peralta would slot in as 135th out of 161 qualified hitters in LD% if he had enough plate appearances.

Note that there are all kinds of hitters out there, and some guy named Mike Trout currently ranks 126th in LD%, at a Peralta-like 18.3%. And in terms of hitting a line drive as opposed to a fly ball, we’re only talking about something like two milimeters on a bat. Given that Peralta has had just 131 PA in the bigs, just 2-3 hits as the difference between a mediocre LD% and a good one.

Compared to the other metrics we’re looking at, LD% fails first in terms of the size of our sample. LD% just doesn’t tell us much, although had he a higher rate, we could have said with better confidence that Peralta was for real.

Remember that timing dimension? Although it shows up in swinging strike percentage (Peralta’s 9.2% rate is roughly average), it also shows up clearly in pull rates. ESPN Stats & Info also runs those kinds of numbers. They have Peralta at a 43.9% pull rate (HLPl%), which is higher than the league average for lefty hitters (39.9%), and a low 11.2% opposite-field rate (HLOp%), which trails the average for lefty hitters (25.5%) quite a bit. But that doesn’t tell the whole story. When you break the field into five pieces, a different trend emerges:

Call me crazy, but when I see how frequently Peralta is hitting to dead center, I see a guy who doesn’t hit the opposite way because he doesn’t have to. Using all fields is great, but this isn’t cricket, folks… even Ichiro Suzuki doesn’t really aim the ball at specific points on the field. Many opposite-field batted balls are hit that way because the batter is late on their swing, not because the pitch is away.

Here’s a Peralta spray chart from FanGraphs, because I like it and it’s pretty:

This is a guy who consistently hits the ball over infielders’ heads and in front of outfielders. Those types of batted balls have the highest hit percentage. I’m feeling pretty good about Peralta’s skill of matching bat to ball.

David Peralta is a hard nut to crack. He’s scorched the ball at many levels, but has never hit a lot of home runs. He’s not necessarily a line drive hitter, but there’s a lot of information to suggest that he times his bat well, and that he barrels the ball very well. Peralta was not among the dozens of D-backs minor leaguers to get a ZiPS projection before the season because he was so far off the map, but even though his situation makes him very hard to project, Steamer sees a good-not-great 105 wRC+ and .760 OPS the rest of the way.

One thing we just don’t have enough data yet for is looking at specific types of pitches. 131 PA is just too small a sample. But for what it’s worth, Peralta is showing no obvious deficiency in that regard. He’s hitting above .300 against fastballs, changeups, and sliders. He’s gotten hits on 2 of 9 curveballs, and spanked the only splitter he saw to dead center for a single. He’s hit above .300 at the top of the zone, at the bottom, and in the middle. He’s a .315 hitter against pitches away, .429 in the middle, and is .200 with 6 hits on pitches inside.

So far, even with hitting just three balls out of the park, Peralta has been a monster. GM Kevin Towers and his staff deserve a ton of credit for finding him in the first place, and even more for using a playing time void in the outfield in the exact right way to put the D-backs in a position to get lucky. It remains to be seen whether Peralta can keep this up, but at this point, all signs point toward that being very possible.

And now, your ESPN Stats & Info moment of Zen: 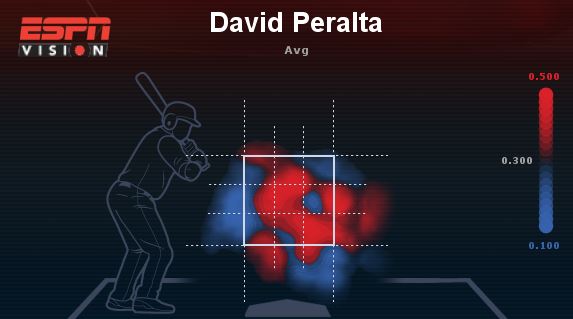 Leave a Reply to Roundup: D-backs “Moneyball”; Could Hill Get Moved? | Inside the 'Zona Cancel reply