If Things Go Wrong How Much of Greinke’s Sparkling 2015 Was Luck?

A Unique Set of Skills

Relief pitchers are weird. Wait, that’s unfair. I’m sure most of them are normal in so far as professional athletes are concerned. But analyzing them is weird. There are so many variables to account for that it’s really difficult to do them justice. Which part of the lineup are they facing? What’s the leverage of the situations they’re placed in? Do they face same-handed hitters most of the time, sheltering them from batters with the platoon advantage? Do they pitch enough to give us a sample that we can responsibly look at? All of these things are in play, plus a bunch more that I’m probably overlooking at the moment.

I bring all of this up because the Diamondbacks have a relief corps that doesn’t seem to rate all that highly. They’re not the Yankees and no one’s claiming that, but I think most who’ve seen the D-backs ‘pen in action recently would come away with the impression that it’s at least average or above now that they’ll be relied on a little less and they’ve added an historically effective Tyler Clippard. It’s clearly not an All-Star-laden group, but Brad Ziegler and Friends are aren’t slouches either. It’s a group that should remain pretty effective in 2016.

So, why don’t they rate better? I more or less tackled this idea when it comes to A.J. Pollock last week, right before I did the same with Shelby Miller. Projections are projections and we’re all tired of talking about them (thank goodness we can start forgetting them in a month). But the projections don’t seem to favor the this collection of relievers.

Fangraphs’ version of WAR (fWAR) is based on Fielding Independent Pitching (FIP). FIP seeks to take the context out of pitching and just analyze the things that pitchers can control best: walks, strikeouts and home runs. That’s a good thing to do and that’s why we generally like FIP.

But there are other ways to be an effective pitcher besides not walking guys, striking a bunch of them out and limiting homers. These alternative ways primarily revolve around controlling batted balls, something that’s inherently difficult to do. But for those who can get guys to pound the ball into the ground with ultra-high frequency or get them to hit weak fly balls extremely often, they can provide highly effective outcomes with regularity. Would it be better to strike out the side rather than induce three grounders? You bet, but strikeouts are expensive on the market and if you can live with the risk of betting on controlling batted balls, you can find yourself some good relievers at a fraction of the price for more prototypical pitchers.

So, rather than using fWAR to evaluate the Diamondbacks’ bullpen, it’s time to use something else. Runs Allowed per Nine Innings (RA/9) is as simple as it sounds: the number of runs allowed by a pitcher every nine innings. It’s not nuanced – it’s not context neutral. But it does capture actual outcomes. We’d do better at projecting future performance by using FIP, but we can better tell the story of what has happened in the past by using RA/9. So for this very brief study, we’ll use the version of WAR based on RA/9 instead. We’re not getting fancy here, we’re simply calling it RA/9-WAR.

Now, RA/9-WAR and fWAR both correlate very well to strikeouts for relievers. Below is the RA/9-WAR per inning pitched plotted with strikeouts. Observe: 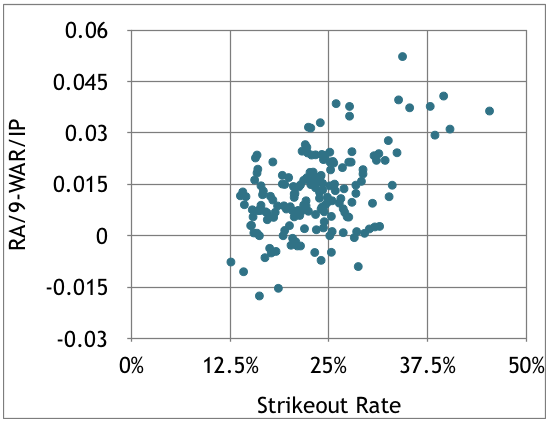 Wow, as strikeout rate goes up, so does production. I think we knew that already. Over the past three years, the top strikeout relievers have been Aroldis Chapman, Andrew Miller, Dellin Betances, Kenley Jansen and Craig Kimbrel. Those guys are great, but are also either very expensive or soon to be very expensive. That’s not going to work for a team with a bottom-third payroll. So the Diamondbacks have found effectiveness, either by accident or design, with pitchers that have alternative skills: controlling batted balls.

When we look at the D-backs’ bullpen, there are fly-ballers galore. Over that same three-year timeframe, Tyler Clippard and Josh Collmenter rank near the top of relievers with 100 or more innings pitched in fly ball rate. Silvino Bracho is in the same mold but obviously doesn’t have the number of innings to back it up. And if we graph fly balls against RA/9-WAR per inning pitched, we get a different picture than we did with strikeouts. Look: 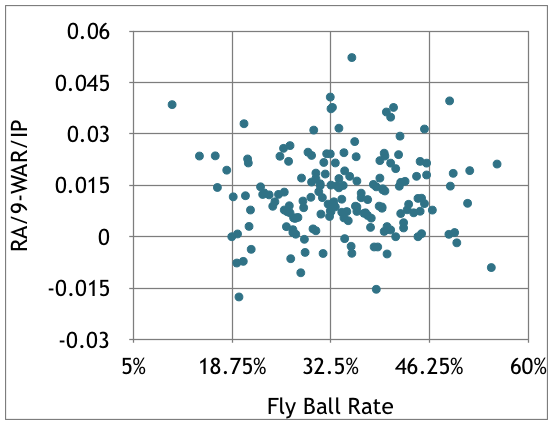 That just looks like a blob if we’re being honest. But if we look a little more closely, a trend does appear. Have another look now that I’ve doctored things: 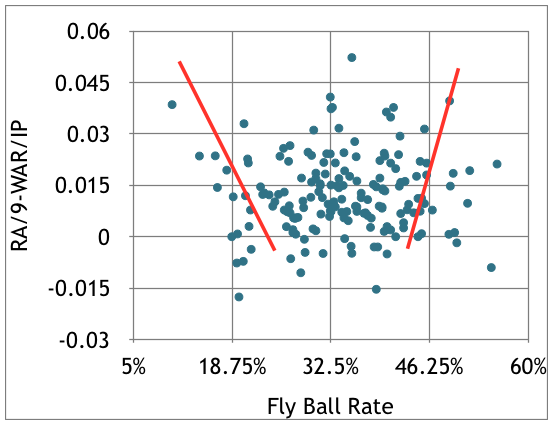 I didn’t change the data at all, but added a few lines to show the shape of the distribution. You’ll notice that the most effective pitchers (those at the top) yield a wider range of fly ball outcomes. This is where the outliers are and either generate a lot more fly balls than the average, or a lot fewer. In essence, they’ve controlled batted balls somehow. These guys are either getting a lot of fly outs (remember, fly balls are the most likely of all batted balls to be converted into outs) or very few (where we assume that they’re generating a bunch of ground balls instead). Being on either end of the spectrum is valuable. Where you don’t want to be is in that big nasty middle part unless you’re an elite strikeout pitcher. As we’ve discussed many times, the middle is the worst place for a pitcher to be.

And just as outliers can find success with fly balls, the same does hold true for ground ball pitchers: 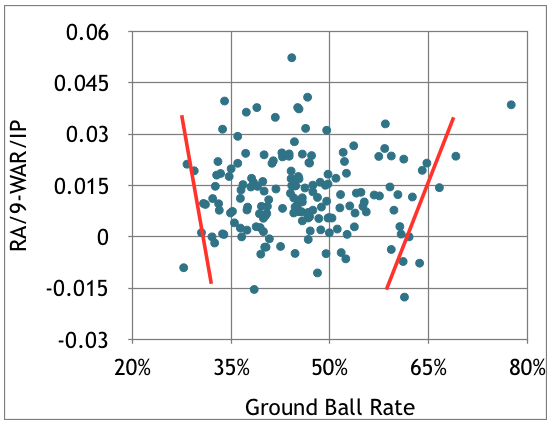 Hey, what do you know? We get an almost inverse shape with ground ball pitchers as we did with fly ball pitchers (it’s supposed to work that way). Just like we saw with their fly ball counterparts, as the outliers emerge, the production trends upwards. That’s not by mistake – ground ball relievers can be very effective if they generate enough ground balls. Brad Ziegler is the obvious example here. He’s not a high-priced flame thrower, but he gets outs consistently. There are those who are very productive with middle-of-the-road ground ball numbers, but again, these are your strikeout champs. It’s possible to be nearly as productive by controlling batted balls and turning them into a ton of flies or grounders.

Now, I don’t usually like to do this, but here are the 50 most valuable relievers with 100 or more innings pitched over the last three years. That’s a data set of 169 total pitchers. We’re looking at something like the top 29.5%. Three names will stand out to you. 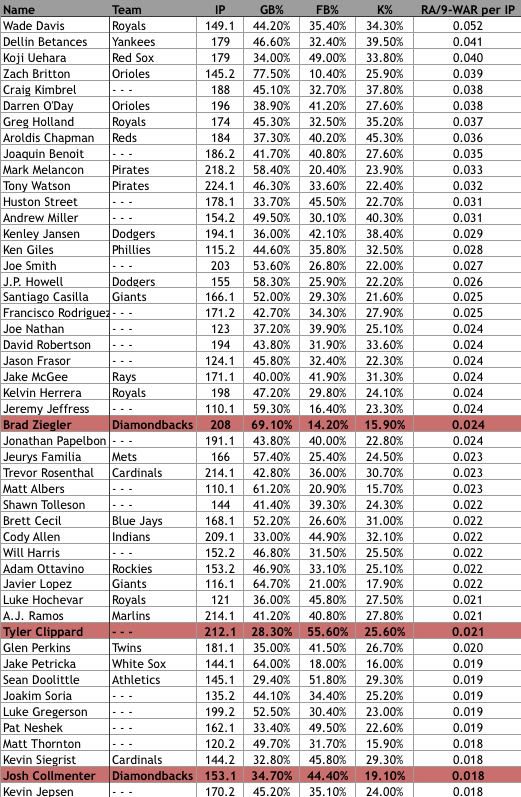 That was a big chart and I apologize, but I want you to take something away from this. There are clearly those that have elite strikeout rates over 30% or more. But notice how many relievers on this list don’t have great strikeout numbers. These guys, these relievers without the big time K’s, tend to be an some anomaly among their batted ball distribution. It’s either Zach Britton and our man Ziegler with the grounders, or Houston Street and Clippard with all of the fly balls. No one’s going to argue that these guys are the same Chapman and Davis and Kimbrel, but they’ve still been damn effective relief pitchers. It might be unconventional, but every out counts.

If there’s a devil in the details, it’s this: by using RA/9-WAR to focus on outcomes and not inputs, we have to acknowledge the shortcomings of the methodology – namely the lack of projection going forward. Remember, we’ve shown what happened in the past, not what’s most likely to occur in the future. What happens if Brad Ziegler’s ground ball rate dips and some of those grounders turn into line drives? What happens if some of Josh Collmenter and Tyler Clippard’s fly balls are popped up a little less and are ultimately driven out of the park? This would spell disaster for any of these guys. And that’s why we like to focus on things like walks and strikeouts in the first place. Wade Davis could lose some K’s and still be very good, but Tyler Clippard is living on the batted ball edge.

Mastering your batted ball distribution is a fickle goal. If perfected, it can be lethal for opposing hitters. Having some sort of abnormal mechanics or exceptional pitch movement can make this very thing possible. But if you lose that advantage and fall back towards the middle it’s usually a very quick slide into obscurity because there’s no supporting skill to bail you out. If Silvino Bracho can get hitters to pop the ball up high enough he’ll stick in the major league bullpen. If hitters don’t and square pitches up ever so slightly more, he’s going to yield a bunch of homers and find himself in Reno. It’s that simple.

So let’s realize the situation. Let’s understand the Diamondbacks’ bullpen has been quite effective even if not determined so by standard measure. Let us appreciate the nuances and abilities for the rarities they are. And let’s also be prepared for the quickness for which disaster can strike. There’s no reason to think that these guys won’t continue to do what they do, but pay extra attention to any changes. As small as they may be, they may be hugely telling. This is a thin line to walk, but if walked effectively it could pay huge dividends for Arizona in 2016.

6 Responses to A Unique Set of Skills