In 2013, Diamondbacks Showing Tendency to Come Back

After the Diamondbacks fell behind early in the first game of the critical Reds series yesterday, I found myself wondering just how frequent it’s been this season for Arizona to dig itself out of deficits.  After the walkoff series against the Orioles and the sixteen-inning affair on Sunday in which the Dbacks came back to win, you wouldn’t be surprised to learn that Arizona’s total is fairly high.  The team had only 37 comeback wins last season, but has already reached the 36 comebacks mark this year.

The most visible and memorable of these comeback wins have been the walkoffs, and Arizona has had more than its share.  National League teams have registered a total of 99 walkoff wins this year – 10 of which were won by the Dbacks.

That’s kind of ridiculous.  Sticking with walkoff wins this season, let’s take a look at how Arizona stacks up against the rest of the league as of this morning: 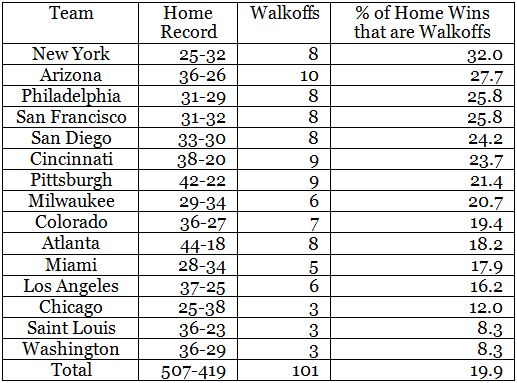 It looks like Arizona has in fact had a flair for the dramatic this season, as it is the only team in the league with as many as 10 walkoffs, and only the Mets have had a higher percentage of their wins come from game-ending hits.  Of course, the best teams don’t need to win by walkoff hits, because they’ve been more likely to enter the end of the game with a lead; you can’t come from behind to win if you aren’t behind in the first place.  Sure enough, the NL teams with the best records have ranked toward the bottom in walkoff percentage, with the teams with more than 70 wins ranking 6th (Cincinnati), 7th (Pittsburgh), 10th (Atlanta), 12th (Los Angeles), and 14th (St. Louis).

That’s fun and all, but I’m not sure that walkoff percentage says much about any team.  Are comeback wins any different?  Here are wins and comeback wins totals, ranked by the highest proportions of comeback wins: 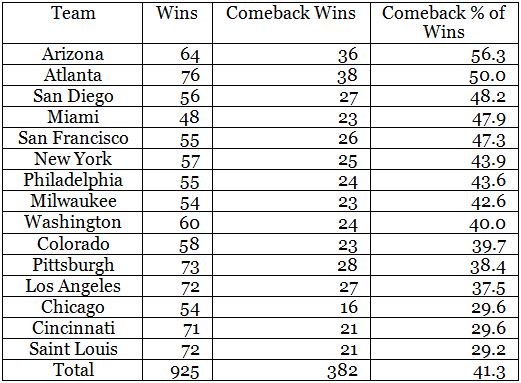 That Arizona shows up all the way at the top of the list may be an indictment of the starting rotation as much as it may be a sign that the offense is actually pretty darn good.  In fact, the Diamondbacks are fourth in the NL in runs scored (ahead of the Dodgers by 21 runs), but are only eighth in runs allowed.

Despite the picture that might paint, the Dbacks rotation ranks sixth in the NL with a 4.05 ERA.  The bullpen, you ask?  Well, Arizona relievers have put up a 3.23 ERA, good for fourth in the league.

Having a good offense but a pitching staff weighted toward the pen is a good recipe to have a higher than average number of comeback wins, and Arizona’s 36 trails only Atlanta’s 38.  Arizona is the only team to have a majority of its wins come after lagging behind an opponent.  But while it’s interesting to know that so many of the team’s wins have been of the comeback variety, comparing comeback wins to overall wins doesn’t tell us much about the team’s propensity to dig out of holes.

So let’s compare comeback wins to losses instead of overall wins to determine the number of games in which the team has fallen behind at any point.  How often have the Diamondbacks clawed their way back, compared to the number of opportunities? 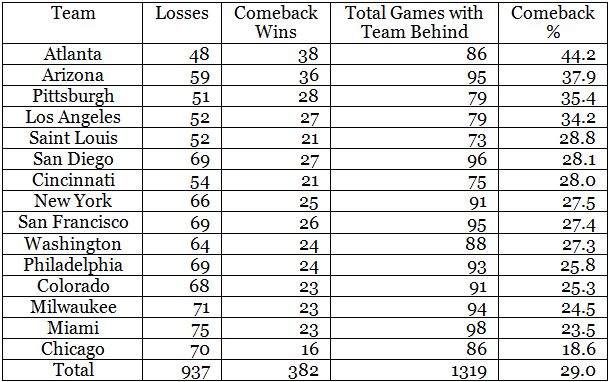 Comparing the number of comeback wins to the number of games in which a team was behind seems like the best measuring stick for an offense’s habit of bailing out a team.  With a mere 424 runs allowed, the Braves have had the most pitching success so far this season, so it’s interesting to see them at the top of the list.  The only team with a run differential better than Atlanta’s is St. Louis, so it’s also significant that St. Louis ranks last in “comeback chances” with 73.

It’s amazing that Arizona has had the second-highest number of comeback chances this year — the only teams to beat the Dbacks’ 95 are the Marlins (98) and Padres (96), and Miami has the worst record in the league.  I suppose you could say that the Dbacks have shown as much of a tendency to dig holes as they have demonstrated a habit of clawing out of them.

After looking at this last table, it seems possible that a team’s tendency toward comebacks isn’t all about comparing its rotation to its offense.  When a team is balanced, scores will tend to be more volatile and the lead is likely to change in more of that teams’ games.  Miami leads in comeback chances, and is almost last in the league in run differential (the Marlins’ -99 mark barely beats out the -103 mark of the Phillies).  Conversely, the league leader in run differential is St. Louis (+143).  Put differently, the best and worst teams seem to meet in the middle in terms of comeback wins — the best have a low total because they are behind less, and the worst have a low total because they don’t win many games overall.

That may be the key to unlocking Arizona’s “comeback-ness” this year.  The Diamondbacks’ +14 run differential is the closest to zero in the league, and there’s a pretty big gap around them — next worse is Colorado at -17, while the team ahead of Arizona in run differential is Pittsburgh at +44.  A balanced attack seems to lead to more close games, leading in turn to volatility and lead changes.

But a balanced run differential doesn’t explain everything.  Although Arizona is among the league leaders in comeback chances, it’s also second in the league in comeback rate.  And that has separated the men from the boys in the league, it seems — unlike the other two tables, which didn’t seem to match winning percentage very closely, the top of comeback rate table is dominated by playoff contenders.  If the season ended today, all five of the teams that would make the playoffs are in the top seven in comeback rate.

It would be great if Arizona were dominating the league right now, blowing everyone away like St. Louis and dispensing of the need to come back to win games.  Yes, it would be great to have a dominant team — but the consolation prize is an entertaining one.

5 Responses to In 2013, Diamondbacks Showing Tendency to Come Back