Coexistence in the Desert: Grounders and Home Runs Blogs and Articles Roundup: Sept 16, 2013

Martin Prado has been up and down offensively, all year.  He was the NL Player of the Month for August, and deservedly so — but while his May was also quite good, his April and June were dismal.  His numbers are now similar to career norms (.281/.331/.414) — but what was Prado doing differently in his recent surge?

Although I don’t think Prado’s stellar month and a half can be blamed on his being a streaky hitter, as a contact guy he does fit that mold.  For the season, Prado is tied with the Brewers’ Norichika Aoki for the second-lowest swinging strike percentage (3.2%) in the majors among qualified hitters (they trail Marco Scutaro, who is at 1.4%).  When Prado swings, he doesn’t miss (91.4% contact rate), particularly at pitches inside the strike zone (Z-Contact% of 96.2%).

So was he doing more with the swings he did take in August, or was he swinging at fewer pitches?  Or was it both? 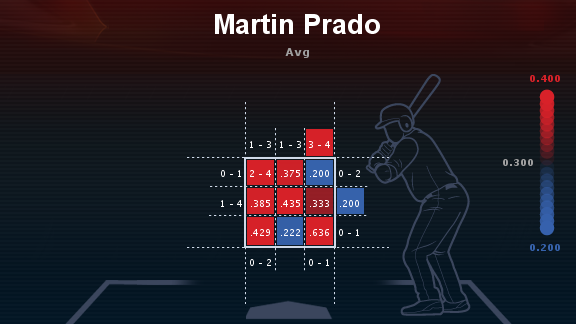 Compare that to the same map, but for the first half of the season: 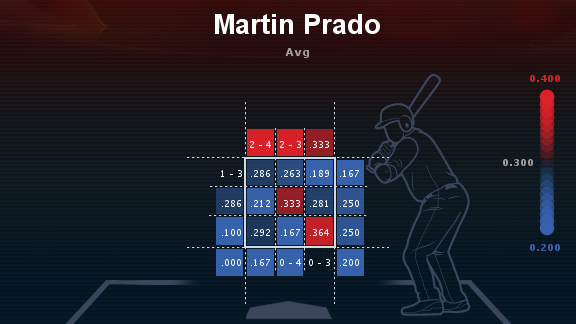 Looks like Prado was doing more with everything.  Note the happy zone down and in.  And if you’re looking for his slugging percentages in each part of the zone, click here for August or here for the first half.

And what was Prado swinging at?  In August: 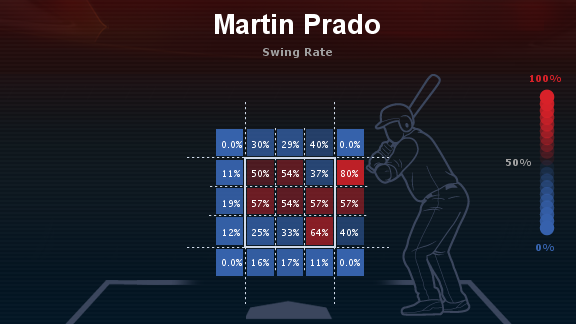 And for the first half: 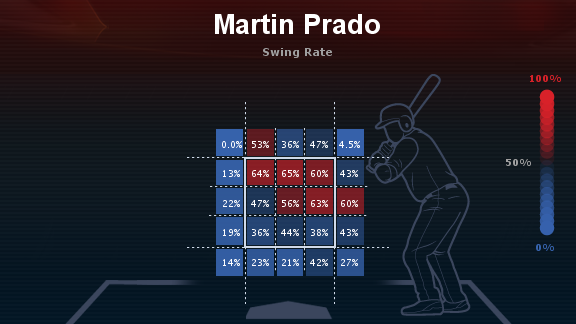 Whereas with the first pair of diagrams you might conclude that Prado was simply having more hits fall in, the swing rate diagrams above do show decreased swing rate overall.

For the season, Prado is only slightly above average in O-Swing% (percent times swinging at pitches outside the zone) at 27.9%, good for 46th among 142 qualified hitters.  Z-Swing% isn’t necessarily good or bad, but Prado is all the way at one extreme among qualified hitters; he has the smallest percentage, at 53.1%.  This comports with what observers take away from Prado’s at bats — he doesn’t necessarily walk a lot, but the bat stays on his shoulder pretty often.

The swing rate diagrams above don’t show a significant pattern in terms of location.  So let’s look at the overall numbers, with rankings among qualified hitters (for swing rates, “highest” for rank is “fewest swings”):

We have some sample size problems here, but we can still draw a few conclusions.  Prado’s contact rate was stable in August versus the first half; a 0.7% difference is pretty small and doesn’t explain Prado’s surge.  The contact percentage outside the zone grew, but shrunk inside the zone.  A shrinking Z-Contact% could suggest that Prado was swinging for the fences a bit more, but this sample is too small to know that for sure.

The samples are bigger for swing percentage, and that’s where it gets interesting.  Usually middle of the pack in O-Swing%, Prado laid off outside pitches at a much higher frequency.  We could plausibly connect that to Prado’s August success.  But what of the decrease in Z-Swing%?  Prado was already extremely selective in picking his spots to swing at pitches inside the zone for the first half.  Tied for fourth, he was something of an outlier — and one might have been tempted to blame Prado’s selectivity for his struggles.

Somehow, even though he struggled while laying off an unusually high number of pitches within the zone in the first half, the answer for Prado was not to be less selective with zone pitches, but to be more selective — Prado swung at zone pitches a ridiculously low 47.7% of the time.  There was an enormous gap between Prado and second place on that scale — Matt Carpenter and David DeJesus were tied for second at 51.2%.

His name? Martin Prado.  Swinging at only 48.9% of pitches inside the strike zone, Prado was 17% better than the average hitter at creating runs last year (wRC+ 117).  Low swing rates are Prado’s calling card, and it works for him.  So much so, that after swinging infrequently early this season wasn’t working out, maybe all Prado had to do was do a more extreme job of being himself.