Over the last few years, I’ve noticed a trend. Analysts have made a habit of highlighting and advocating smart, buy-low moves where teams with low payrolls can extract value at a potentially below-market-value rate. And this should come as no surprise, because who doesn’t like finding a perfectly good sweater or pair jeans for half off? Baseball teams are no different, except they don’t wear pants. Well, the individuals within the organization wear pants, but, um, you get the point. Small market, low-payroll teams often try to find these bargains on the market, hoping to get an above-average return on their investment given their lack of financial resources.

An example of this kind of move took place just two weeks ago. The San Diego Padres signed free agent hurler Josh Johnson to a one-year, $8 million deal with an option for 2015 where the Padres would retain him for a mere $4 million should Johnson make fewer than seven starts next season. This was quite the creative deal for the Padres, as was noted by FanGraphs’ Eno Sarris right after the announcement. The Padres have very limited payroll and Johnson could possibly pay huge dividends for them as he’s easily the most talented pitcher in their projected rotation, if not the most durable. This is the perfect type of move for the Padres because they don’t necessarily have hopes to contend in 2014 and they can afford to buy-low on Johnson, especially with the unique option year.

But what about the Diamondbacks? They have more resources and have genuine aspirations (sorry Padre fans, “to not finish last” is not a genuine aspiration). They don’t have to make desperate moves like rolling the dice on broken arms. The Marlins can sign a cheap, old platoon partner and the Astros can afford to give at-bats or innings to a career minor leaguer in hopes that he catches fire, but the Diamondbacks don’t have that luxury. Arizona has to optimize every bit of it’s resources in order to be serious contenders for a very competitive division in a very competitive league.

So I got to thinking, how does a mid-market, mid-payroll team maximize its roster to contend with the big spenders? The Diamondbacks are entering middle-of-the-road territory with a payroll threshold that should enter the $100-$110 million range. To start with, I looked at other teams that have had similar payrolls to Arizona over the last three years (take a look at these charts!). I divided the number of wins over that time by the payroll spent to find how much these teams are paying for each win. First, to the numbers! 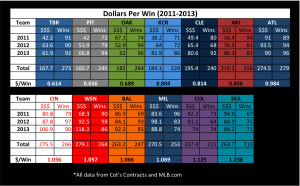 As you can see, the Diamondbacks have been relatively efficient with their money. Sure, the Rays and A’s are known for achieving more with less, but Arizona hasn’t been horrible.

It could be far worse, as you can see that my beloved Mariners have spent about $40 million more over this span while winning over 40 less games, due mostly to free agent signings like Chone Figgins, Milton Bradley, Michael Morse, Kendrys Morales, Joe Saunders and Franklin Gutierrez over the last few years. They did spend a lot of cash on Ichiro and Felix Hernandez, but those are defendable expenses. The free agent signings were meant to “fix” the offense and if you’ve watched an M’s game at any point in the last few years, you know that it’s still got a long way to go. If we can learn anything from the Mariners, it’s that attempting to buy increased performance through the free agent market is both risky and expensive.

On the other end of the spectrum, let’s take a look at a team like the Pirates. They’ve been contenders each of the last three years and are primed to continue contending for the foreseeable future thanks to young contributors like Starling Marte, Gerrit Cole, Pedro Alvarez, Neil Walker, a cost-effective bullpen and exciting prospects about to arrive in Jameson Taillon, Gregory Polanco, Josh Bell and more. Even their stars Andrew McCutchen, AJ Burnett and Russell Martin are paid reasonable salaries compared to their production. Essentially, there’s a ton of surplus value on that roster and plenty to look forward to down the road. If I’m a Pirates fan, I like the prospectus of the team for the next several years.

But the Diamondbacks aren’t the Pirates. They have considerably more financial resources than Pittsburgh and can afford to take a few more risks. They shouldn’t go down the road of the Mariners, though, and begin spending wildly on aging players just to hit more home runs like the M’s did (note to Mariners front office: HR’s ≠ W’s). There has to be some kind of happy medium here, a place where the team can afford to spend some money on free agents to fill in the gaps between homegrown talent.

But how has that “homegrown talent” been working out for Arizona? Jonathan Judge recently wrote an intriguing piece relating to this very topic. He created a metric to measure team contributions from “core contributors” on each team’s roster, then ranked the league from top to bottom. Where did the Diamondbacks finish? Like virtually every other statistic aside from blown saves, Arizona was in the middle of the pack.  The Diamondbacks clearly aren’t getting enough contribution from young, cost-controlled talent given their payroll limitations. The Cardinals, surprise, surprise, led the league in this area as they are chalk-full of players groomed by their organization. Arizona, meanwhile, can only count Corbin, Goldschmidt, Parra and Pollock as guys that they raised and got significant contributions from last season. That’s not enough.

Take a look at the table below as I compared the three “core contributors” from Judge’s study, plus AJ Pollock, to the ten highest-paid players on the Arizona roster last season.

The surplus value from the four core contributors alone dwarfs the production of the ten highest-paid Diamondbacks. And this confirms something we should already know: home-grown talent is far more cost-effective than veteran and free agent talent. Older players get hurt more often (Ross, Hill, Chavez, Putz, McCarthy) and expensive, ineffective players nearly impossible to move (Bell, (luckily) Kubel). The Diamondbacks can’t afford to build a winner through signing free agents and the front office knows this. Instead, they’ll have to continue to build from within, and this is why the prospect game is so important. The team has to develop the core of its production from within and fill holes or weaknesses with free agents. This is why a trade of significant pieces for a pitcher like Jeff Samardzija, a good but unspectacular pitcher, is risky. Unless Samardzija puts Arizona over the hump and into the playoffs, it’s a dangerous transaction, one in which the Diamondbacks are likely to come up short on over time. This doesn’t mean they shouldn’t trade for Samardzija or a similar arm, it just means that they’d better be damn sure that it’s the right move.

So who can the Diamondbacks follow as an example? The Braves may be the best fit. With annual payroll of about $91 million, the Braves have averaged 92 wins a season over the last three years. And they’ve been consistent about it, too, not relying on some magical 110-win season to pad their average. Instead, they win consistently, year in and year out, and have made the playoff eight times since 2000.

How do they do it with a payroll that sits under $100 million? They get a bunch of surplus value from players that they’ve developed, such as Jason Heyward, Freddie Freeman, Andrelton Simmons, Evan Gattis, Mike Minor, Kris Medlen, Julio Teheran, Craig Kimbrel, Alex Wood and more. In Judge’s core player analysis, the Braves ranked second to the Cardinals with eight core contributors. The vast majority of those guys played 2013 at or near the league minimum in terms of salary, allowing the Braves to pepper in other players like Justin Upton and Tim Hudson at higher prices. You could argue that the deals given to BJ Upton and Dan Uggla are pretty horrible, but that just shows the nature of free agent signings or veteran extensions. The surplus value from the core contributors keeps deals like those mentioned above from sinking the organization. Oh, and there’s still more help on the way in the form of JR Graham, Christian Betancourt and Sean Gilmartin.

I suppose this all comes down to knowing where you are as an organization and this is why I’m confused. The Diamondbacks need to decide if they’re a organization that wants to build from within and have sustainable success or one that buys from the open market, acknowledging that they’re going to overspend and can’t contend with the big-market teams for the top tier of players. They’ve most recently bought a collection of role players and it appears that they’re willing to cast their lot with option two. The “spend on the market” option is volatile, produces up and down results and is not the one I’m most interested in watching. It may, however, be the option I’m stuck with.

The good news for Arizona is that it can decide to change if it wishes by simply retaining a lot of their prospect talent and continuing to cultivate from within. If anything, more money spent on player development could pay more affordable, sustainable dividends. This might mean that the team mostly stands pat in the race to acquire players this offseason but it could pay off in the long run assuming that the minor league, scouting and player development staff is effective. There’s no point in attempting to keep up with the Dodgers when it comes to acquiring talent, rather it’s best to create a different model and stick to it. Hey, it works for Rays who have only five less wins than the Yankees over the last three years while spending $477 million less in that time span.

Arizona should only deal away young talent if they truly believe that they are one or two players away from getting over the hump and into the post season. Should they make the wrong move, they could put themselves at a long-standing disadvantage and one they financially can’t afford to get out of. The next two months should tell us exactly how the front office feels about this team as several acquisitions would indicate that they want to win now at the expense of the future. Time will tell if this is truly the right choice.