Just How Good is the Paul Goldschmidt Contract?

On Tuesday, Freddie Freeman and the Atlanta Braves agreed to a whopping $135M, 8-year contract extension, avoiding a hearing in what would have been Freeman’s first year of arbitration eligibility. Armed with the Freeman contract details, we’re in a better position to evaluate what just might be Towers’s best move at the helm of the D-backs front office, which seems like a particularly relevant exercise in light of Towers’s own contract extension. 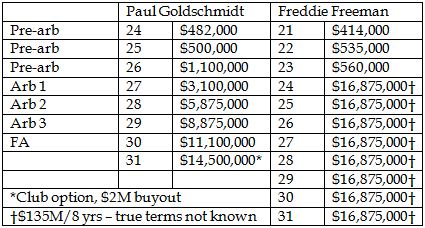 Had the D-backs not signed Goldy to an extension when they did, with barely over a year of service time, the team would have had two paths it could have followed: go year to year with him, or sign him to an extension later in his tenure in Arizona. That’s a bit of a simplification, as any manner of extension would have been possible, and even in the year-to-year scenario, they could have signed him for more than one year at a time — but I think taking a look at both options is enlightening with respect to the extension that Goldy did in fact sign.

So what would it have costed the D-backs to go year to year? They’d actually be paying him less for 2014 — $500,000 or slightly above, rather than $1M. After that, things would get dicey. Assuming he kept his 2014 production near 2013 levels, he would be in line for a significant first year arbitration award, probably in the ballpark of $7M or so. It would only go up from there: his 2016 salary might have been in the $12M range, and in his last year of club control, Goldy might have been in line for $16M or so. That’s something in the order of $35M-$37M for the next four seasons, with Goldy departing as a free agent before the 2018 season. If they wanted to sign him for any free agent seasons, they’d expect to do so with a long-term contract that could pay him $25M/season, if baseball salaries continue to inflate.

If they waited to sign an extension until he was at the same point in his career as Freddie Freeman is now, he wouldn’t necessarily be more expensive for his arbitration seasons, but the team would pay a pretty penny for any free agent years. Again assuming 2014 production similar to Goldy’s 2013 season, one would expect a slight discount for his arbitration years — there’s value for Goldy in being protected against what would happen if he suffered a major or minor injury, or a significant reduction in production. Instead of the $35M he might garner in the year-to-year scenario for three years, I think we’d be looking at $30M or so, with yearly salaries of $7M, $10M and $13M. The savings there would come at the cost of guaranteeing salaries for free agent seasons at market or near-market levels, which could be anywhere from $20M to $25M. Freeman got approximately $22M for his free agent seasons — he is not nearly the hitter (or defender) that Goldy is, but he’s also significantly younger than Goldy, who would not hit free agency until just after his 30th birthday (Freeman would have been 27).

Under the two previous scenarios, Goldy would have been in line for either $35M or so, or $30M or so for his next four seasons — quite a bit more than the $18.95M he’ll make under his current contract. In addition, both of the above scenarios would involve paying Goldy $22M or $25M. The difference between $22M and $25M is, essentially, the cost of not being able to stop and evaluate Goldy before the 2018 season. With his current contract, the D-backs are on the hook for one of those would-be free agent seasons, for $11.1M — an additional, considerable savings of $11M (the $22M is the correct comparison there). The current contract also has an option for the 2019 season, for $14.5M, or a $2M buyout. That buyout is significant, but not so significant as to completely diminish the benefit of having the $14.5M salary be an option. In other words, there’s still greater value in the current option than there would be with a $14.5M guaranteed salary. I’ll call that about $2M, making the total under-market benefit $9.5M for 2019.

That’s a grand total of approximately $50.5M (extension a year from now) or $55.5M (year to year, then FA contract) in potential savings for the next six seasons. Pretty good, Mr. Towers. That more or less answers the question of how much the D-backs could benefit from the Goldy extension — but it does not answer the question of whether the contract was a good move at the time.

Goldy broke out in a big way in 2013, and it took a long time for many evaluators to believe it was the real deal. Goldy projected as average or slightly better — not plus plus overall. I do think that most people thought Goldy would be a tick below what Freddie Freeman was in 2013, but that would still make the contract a decent value, especially with the flexibility afforded by the option year and an extra benefit of delaying his free agency, which I’ll get back to in a moment. There was also a risk, though, that he would fall short of expectations and stall out as a developing player — and in those circumstances, he could have been a non-tender candidate as early as the end of 2016, after the second year of arbitration. Call that the “Ike Davis” risk as discussed by Jeff Wiser and Bryan Grosnick, and in those circumstances, the team would be on the hook for almost $20M in surplus salary (and the buyout commitment) that it would not otherwise have spent.

That extra benefit of delaying his free agency is very significant, but it operates differently than some of the other math. I noted above that Goldy would not have been eligible for free agency until just after his 30th birthday, which is kind of amazing. Now, if Goldy remains a productive player and the 2019 option is exercised, he won’t hit free agency until he is 32 years old. In other words, all of the seasons covered by Goldy’s next contract will be part of his decline phase. If he had hit free agency a couple of years earlier, the signing team would be getting a couple more prime years, and the salary for those years might have carried over to some of his decline years. But whatever Goldy is worth in 2019 — he’s not going to get more than that for 2020 through free agency, and there’s a pretty good chance he’ll get less.

In other words, by giving themselves the chance to control two free agency years, the D-backs more or less short-circuited Goldy’s chances of a large free agent contract if and when he does hit the market. They have no reason to add onto Goldy’s contract now, as they can sit and wait to see if he maintains 2013 levels, and wait longer to see if he shows any signs of decline in 2019. Barring a significant increase in baseball salaries overall, it may be difficult for Goldy to ever make more than $20M in any seasons, although his 2013 was much better than Freeman’s (and Freeman will essentially be making $22M for five seasons of his contract). Maybe the D-backs wouldn’t have signed Goldy for 2020 and beyond anyway. But if they were to do so, the deal that Towers inked at the outset of 2013 will make the AAV for that future contract more manageable for the organization.

To evaluate the Goldy extension, you could simply compare the worst case scenario (eating $20M) to the likeliest scenario (a modest benefit) and the best case scenario (a savings of $50.5M or $55.5M). Those outer limits point to a smart contract, and if Towers had some legitimate reasons to believe Goldy would break out and significantly surpass expectations, he deserves even more credit. Add to that this potential future benefit of short-circuiting the AAV of Goldy’s next contract, and I think you have an extremely shrewd move.

All salary information from Baseball-Reference.com.

2 Responses to Just How Good is the Paul Goldschmidt Contract?