The D-backs get an Inside Edge

Defense is something that’s been talked about quite a bit this offseason. Whether it’s a discussion of who should be the starting shortstop, the addition of Mark Trumbo to the outfield or even in evaluating just how good Gerardo Parra was in 2013, defense has been a prominent part of the discussion. Lucky for us, FanGraphs just rolled out a new defensive leaderboard courtesy of the good folks at Inside Edge. From the article above, here’s what the new leaderboard is all about:

(FanGraphs has) a new section on both the leaderboards and player pages that now displays Inside Edge fielding data.

Inside Edge scouts watch every play and grade how easy or difficult it is to successfully field on the following scale:

This isn’t about projections or some far-reaching new study. This is the work of dedicated scouts who keep track of every fielding play, in every game, all season long. This is great in that the eyes of these trained individuals are actually the ones keeping track of the data. While it might seem subjective, these guys actually use a very precise measurement system in making sure that every fielding play is judged fairly.  You already see their work through ESPN, Yahoo! Sports, MLB Network, and USA Today, you probably just didn’t know it was Inside Edge as they’re the “behind the scenes” source for a lot of different types of baseball data.

Naturally, upon hearing about this new resource, I immediately wanted to apply it to the Diamondbacks. Rather than spend a lot of time talking about the data, let’s just have a look at it. 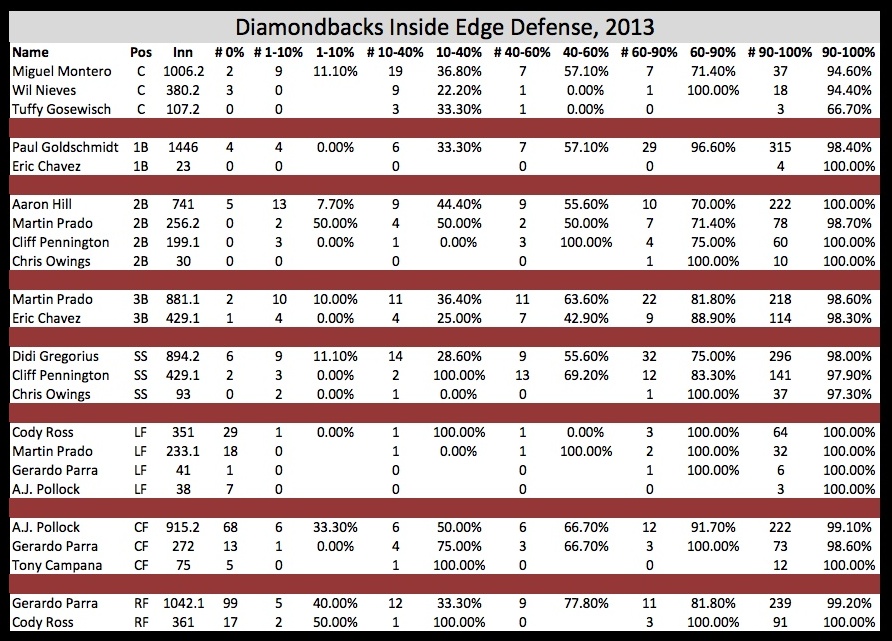 The first thing you should pay attention to here is the raw number of chances for each category. Yes, Martin Prado turned 50% of his “remote” chances at second base into outs, but he only had two chances all season long in this category and he turned one of them into an out. So let this be a warning, sample sizes are very important and only one season’s worth of data is tough to draw conclusions from. But this is Inside the ‘Zona and we’re gonna give it a shot!

First Base: at first, we can see why Goldy won a Gold Glove. True, he didn’t have a lot of tough chances, but neither do most first baseman and he made 98.4% of the routine plays. Having that kind of dependability at first is critical since that’s where a large number of outs get made.

Second Base: Aaron Hill was excellent at second, but notice how good Cliff Pennington was there. This is what you’d expect when a defensive wizard at short gets an opportunity to play an easier position. Conversely, notice that Prado was slightly worse than Hill was. This is likely the result of a third baseman/left fielder plays at second where his range is tested a little more.

Third Base: at third, Prado was pretty darn good. He makes the routine plays with great consistency and even stretches some of the tougher plays into outs. Chavez, on the other hand, looks like an aging guy who can’t quite get to all of the balls the Prado does. His bat, of course, mitigates that, but it’s worth noting that there is indeed a trade off to putting him in the lineup: more bat, less D.

Shortstop: while he had some miscues for sure, Didi Gregorius was pretty darn solid at short considering it’s the toughest spot in the infield. Scouts have long held that he’ll grow into a great defensive shortstop eventually, and considering it was his first taste of MLB defense, I’d say he held his own. Pennington was noticeable better, though, and his rates are pretty darn impressive. I don’t think it’s fair to try to judge Chris Owings here with only 93 innings played at short, but he appears at least capable, which we already knew.

Left Field: in left, there’s not much to talk about. Both Cody Ross and Martin Prado made all of the plays they should have. Perhaps the thing to consider here is the relative ease of playing left field in general. This is why guys who aren’t great fielders can be hid in left field with a relatively low impact. We’ll get into that later.

Center Field: AJ Pollock was great in center, both according to these stats and our very own eyes. He looks like someone who can be penciled in here for a long time to come. Gerardo Parra wasn’t quite as good, which should come as no surprise.

Right Field: peaking of Parra, his rates in right are incredible. There should be no confusion as to why he received the other gold glove for Arizona. For the record, Cody Ross was just fine there, too, although perhaps not to the same level as Gerardo.

I skipped the catchers for a reason: they don’t get a lot of opportunities and I’m not very confident in how Inside Edge calculates these rates. I couldn’t find more on it, so I’m leaving it alone for now.

Now, let’s have a look some other notable players:

In very limited action, Mark Trumbo appears to have held his own in left field. This is where the whole “hide the poor fielder in left” thing comes in. Just like we can’t draw a ton of conclusions from Owings’ limited time at short, it’s not fair to judge Trumbo from his 58 innings in the outfield. The bat will still have to carry him to justify the projected drop in defense. Maybe he’ll improve now that it’s a full-time thing again, but I’m not holding my breath. Notably, he was about as good as Jason Kubel in left when he logged almost 500 innings there in 2012.

On that topic, Jason Kubel wasn’t  exactly great out in left during his time and I don’t think  we’ll be missing him, defensively or at the plate. Adam Eaton had limited chances in center, but he did a fine job when he was there according to these metrics. My feeling is that the D-backs let a good one get away, but they have a good one in Pollock, so maybe it’s a wash depending on what kind of a player Eaton turns into offensively in Chicago. While it was a small sample, Matt Davidson looked completely capable at third. Blocked by Prado, he was expendable but it’s good to know where he was defensively anyway.

I don’t think this is the be-all end-all of defensive metrics, but it’s another tool we have to gauge how the team is performing in the field. While the percentages are seemingly very close between players, it’s important to remember that plays missed open a can of worms for pitchers and giving away outs is always a bad policy. The differences are bigger than they appear when they play out on the diamond. Just ask the pitcher who thought he was about to get out of the inning.

Defense is an increasing emphasis all across baseball and the Diamondbacks are very good across the board, especially at first and in right. With a pitching staff that’s more solid than good, continued strong results from the defense behind them is a must.

One Response to The D-backs get an Inside Edge