It’s early in the season, but we can only tell ourselves this for so long. Eventually, even knowing that there are 150 more games to play becomes discomforting. Obviously, the team as a whole hasn’t been playing well and if you’ve seen and if you’ve seen any D-backs baseball lately, you’re likely all too familiar with this. With that said, the blame is somewhat lopsided. While the Diamondbacks have been scoring runs at a reasonable rate, the pitching has been a bit behind not up to par tough to watch downright terrible. There’s no silver lining, either. We can’t say, “yeah they have 6.15 team ERA but the peripherals tell a different story.” Instead, we have to acknowledge that the team’s FIP and SIERA indicate that they’ve been the worst staff in the game. All signs, traditional and advanced, point to an ugly picture.

So upon my arrival back home from a way too brief vacation to Hawaii (#humblebrag), I figured I’d dive into the PITCHf/x data that’s been collected on the pitching staff thus far. Unfortunately, there’s no info from Australia as the Sydney Cricket Grounds aren’t equipped with the necessary faculties to track pitches. For the rest of the games, however, we have some numbers to work with. With that said, there isn’t a ton that we can go on given the small samples, meaning that although we may see some stuff in the data, we can’t really rely on it yet, with one exception: velocity.

As Dave Cameron pointed out last week, early season velocities are a pretty good indicator of what we can expect from a pitcher as the season progresses, but we have to make an adjustment first. Because the weather is colder in April and pitchers aren’t completely stretched out yet, they almost universally throw a little less hard in April, and by a little less hard, what I should say is that they tend lose about one mile-per-hour on their fastball during the first month of the season compared to their end-of-season average on the same pitch. So with this adjustment in mind, we should expect to see a slight drop in velocity across the board.

I immediately looked to see if there were any striking indicators in this category. As Rod pointed out on Tuesday, there are some troubling signs with JJ Putz, but take a look at what I found across the board: 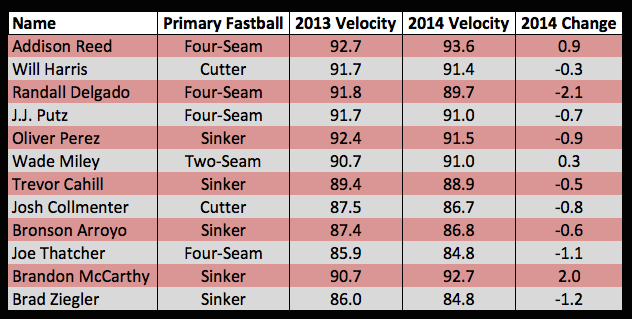 *Note: primary fastball was determined by which fastball type the pitcher has thrown most frequently in 2014 so as to have the most stable current sample possible. Bo Schultz and Ryan Rowland-Smith were omitted because they did not throw a major league pitch in 2013.

As you’d expect, most of the pitchers are somewhere between 0.7 and 1.2 miles-per-hour off of their 2013 season velocity. Addison Reed has actually gained some zip on his heater, which should be a welcomed sign given that he’d lost velocity since his debut for Chicago. If we can trust in the velocity gains that are usually seen as the season progresses, Reed could be pumping them in at 94-95mph this summer, which might be helpful. Good location also helps, but I’ll save this discussion later.

The other outlier in the table above is Brandon McCarthy, and he’s not just an outlier, those results are almost freakish. Guys don’t just gain 2-3mph in the offseason, especially not guys in their 30’s with over 800 big league innings on their arms. Something has to have changed, most likely mechanical. We’ve already highlighted his new repertoire, but there’s obviously more going on than just a reluctance to throw a changeup.

So what might the added velocity mean? My initial thought was that McCarthy may not be getting the same movement on the sinker that he’s used to. As pitchers throw a pitch harder, they tend to get less movement on the ball. A cursory look, however, reveals that he’s still getting similar sink and fade on the pitch as he did in 2013. In 2012 he really had it moving, but he’s not far off that pace despite the added velocity. Interestingly, hitters have been hitting it less frequently when the pitch is in the zone thus far, but hitting it more frequently out of the zone in 2014. This is obviously counterintuitive and shouldn’t be taken as a long-standing trend but rather as something that is a result of the small sample as he’s made only two starts this year.

So there are a lot of ways to go from here, but we can rest reasonably assured that velocity isn’t the issue. Most pitchers are within the “normal” range of velocities and in the case of Reed and McCarthy, we’ve actually seen velocity increases that may even rise from here. In McCarthy’s case, there doesn’t seem to be a loss of movement given the newly found velo, and as he’s stated, his poor results have likely been a result of location. Perhaps some heat maps are in order, but for now, we can check velocity troubles off our list for the worst pitching staff in baseball.