It was the top of the eighth inning, in the first game of a doubleheader, when Aaron Hill drew a walk against Jose Valverde. The walk loaded the bases in a tie game, but would prove meaningless as Eric Chavez flew out to end the inning. Just a “BB” in the scorebook, to be forgotten about. Except that was May 25th, today is June 24th, and Aaron Hill has not drawn a walk since.

Aaron Hill’s 27 game walkless streak is the 19th longest in D-backs history. Not only has Hill struggled to find a free pass, but even three ball counts have been unfamiliar to him during this stretch. Last season, over 662 plate appearances, he reached a three ball count 19% of the time. During his 27 game walkless streak, over 101 plate appearances, he has seen three balls on the scoreboard only 9 times, or roughly 9%. For whatever reason, he is not walking, and it gets worse as he is not hitting either.

The career .272 hitter, who has hit around league average throughout his career, is batting .251 this season. Using weighted runs created plus (wRC+) which attempts to measure a player’s total offensive contribution, adjusted for the park and league, Hill is producing 18% below league average. He hasn’t quite been himself all season, but it is a slumping June that has really brought down his overall numbers.

In the month of June, Hill has been the D-backs least productive hitter. After hitting for a wRC+ of 95 in March/April and 91 in May, meaning close to league average, in June his offense has swooned to a 48 wRC+. It is pretty clear that he is lost at the plate, but the fact that he hasn’t drawn a walk for the entirety of the month suggests that he is not seeing the ball well.

The question is what happened around the end of May into June that turned an average start to the season bad?

May 25th is an interesting date to mark as a dividing line in Hill’s season. It was the last day that he drew a walk, but more than that, it seems that pitchers started to pitch to him differently around that point. We can see from the chart below that he has seen more breaking pitches and less hard stuff of late. 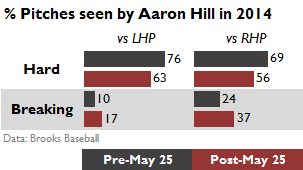 It is sort of telling that around the time when Aaron Hill started slumping he began to see different types of pitches. Did the pitchers figure out a hole in Hill’s swing? Let’s look at how he has done against breaking pitches during his time with the Diamondbacks. 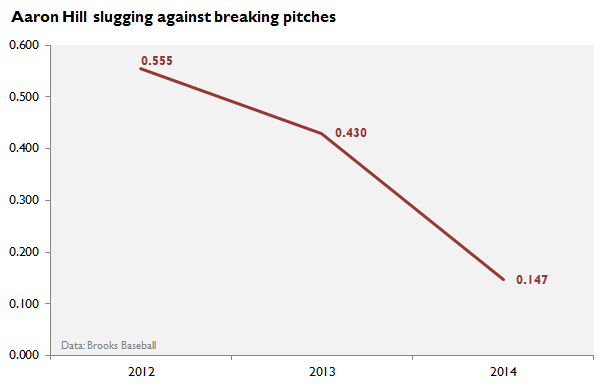 Now we could be on to something. A career .389 slugger against breaking stuff versus .471 on hard pitches, we can see from the graph above that his year-by-year performance against breaking pitches has gotten worse, or frankly, terrible. This season he is only slugging .147 against curveballs and sliders.

Before May 25th, pitchers threw hard pitches versus breaking stuff on a roughly 77% to 23% split. Since then, they are throwing curveballs and sliders more often at the expense of fastballs dropping the ratio of hard to breaking to 64% versus 36%.

Put simply, Hill is struggling to hit breaking pitches, and pitchers have seemed to figure that out, so they are throwing them more often, hence the overall drop in his numbers.

Watching Aaron Hill over the past month, we know that he has struggled. We now know from the numbers that breaking pitches have been a major contributor to his struggles. Pinpointing why breaking pitches have proved so difficult to hit all of a sudden is more tricky. Could it be because of his injuries? He hurt his shoulder and then his ankle. Maybe that has affected his swing? He claims that is not a factor. It is hard to tell from afar if that is true or not.

Which brings us back to his plate discipline. Aaron Hill has hit around league average for over 5,000 plate appearances in his career. We know the type of hitter he is, and as they say, over time, his numbers will start to look like the back of his baseball card. What is worrisome is how often he is striking out – a career high 18% – and how infrequently he is drawing a walk – a career low 4.7%.

Is Aaron Hill struggling offensively because he has lost sight of the strike zone?

Lucky for us, we have ways to measure how good a player’s eye is beyond the outcomes of their at-bats. Brooks Baseball tracks strike zone discrimination, or how well a hitter is able to determine balls from strikes. Again, this is more granular than measuring walks and strike outs. A hitter may ground out on an 0-2 count because they took a defensive swing after swinging and missing on two pitches out of the strike zone before that. 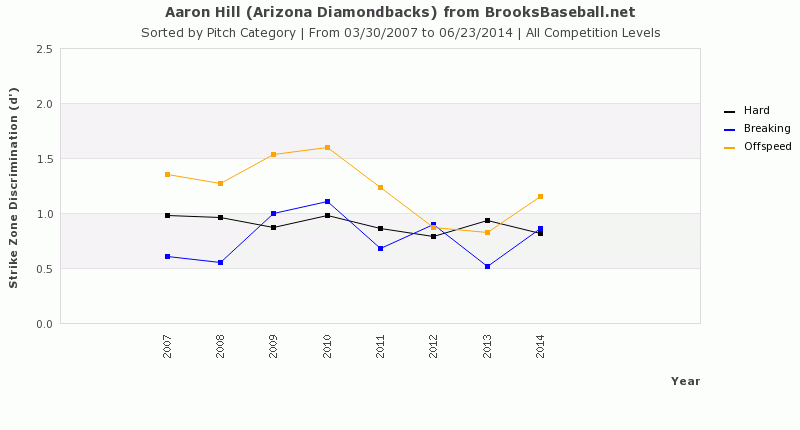 Remember, higher values on the chart equate into a better eye. We can see that there is definite fluctuation throughout Hill’s career, but 2014 doesn’t stick out as a bad year, or one in which he has had a particularly poor eye.

His strike zone discrimination seems to be okay, but that doesn’t mean he is being as “patient” at the plate. Looking at his swing percentage, so that includes swings on pitches both inside and outside the strike zone, there is an uptick this season, at least against offspeed pitches. And while he is swinging more often, he is also whiffing a lot. Hill’s swing percentage of 57% against offspeed pitches is his highest since 2009, and he is whiffing on 37% of those swings, a career high.

We already discussed how Hill has struggled hitting breaking pitches this June, but against offspeed pitches, which he only sees on occasion (9%), but enough to affect plenty of at-bats, he is completely lost, whiffing on 50% of his swings this month. Hill has not lost sight of the strike zone this season, but his aggressiveness against offspeed pitches is hurting him.

Over 101 plate appearances, within a season that is only three months old, it is difficult to say that Aaron Hill is doing anything that time won’t eventually correct. All hitters fall into slumps, and June has been a slumping month for Hill. The fact that he hasn’t drawn a walk in 27 games raises some eyebrows, but there is a bigger story here. Opposing pitchers have figured out that Hill is struggling to hit breaking pitches so they are throwing them more often. Until he starts hitting curveballs and sliders again, he is unlikely to break out of this slump. And we will hope that rival teams don’t read this post and start thinking about throwing offspeed pitches more often too.