Miguel Montero is tied with Giancarlo Stanton for something related to power. The two hitters each have six home runs on two strike counts. That ranks tenth most in baseball this season, and coincides with a trend throughout the game that hitters aren’t afraid to swing for the fences, regardless of the count. For Montero, hitting long balls when faced with a two-strike count is nothing new. The catcher has a knack for doing so over his career. Let’s take a deeper look.

Of Montero’s 95 career home runs, over one-third of them have come when facing two strikes. An impressive total when comparing him against the game’s best home run hitters. Among active HR leaders (and we will include A-Rod and Manny), the percentage of Montero’s home runs that come on two strikes ranks quite high. 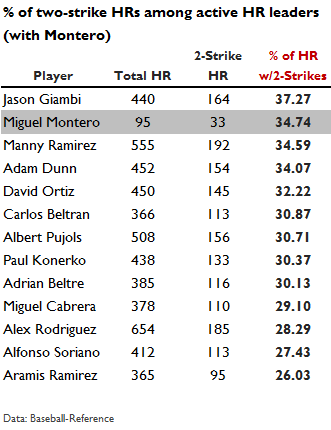 Of course, since the table above includes active home run leaders, it doesn’t necessarily consider the most frequent two-strike power hitters in terms of percentage of their total home runs, but instead looks at which players hit the most home runs overall. We can look at another table that includes all active players with at least as many two-strike home runs as Montero (33), and see how his percentage to his total home run count stacks up. 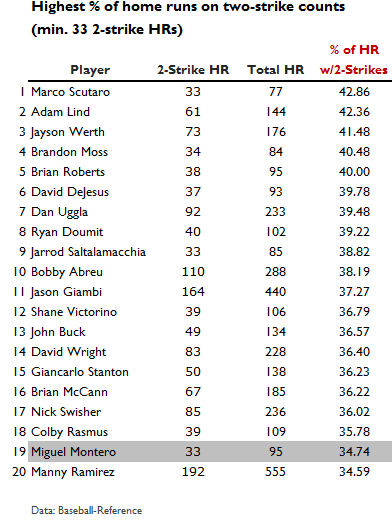 Of the 100 active players with as many two-strike home runs as Montero, he ranks 19th most frequent. A long-winded way of saying that Montero hits a high percentage of his home runs when there are two strikes compared to most hitters in baseball.

What makes Montero so powerful in two-strike counts?

The majority of Montero’s power comes against right-handed pitching. Ten of his eleven home runs this season, and eighty of his career 95 home runs, have come against righties. And a big reason for this is his ability to connect on offspeed pitches for long balls. Right-handed pitchers tend to use their change-up more often against lefties, so Montero sees a greater percentage of change-ups, particularly with two strikes, when facing right-handed pitching. Fifteen percent of Montero’s two-strike home runs have come against a change-up from a righty. His HR% on two-strikes against change-ups is 2.16%, by far the highest of any pitch he faces. Despite seeing over twice as many sinkers and five times as many four-seam fastballs in two-strike counts, he has hit more home runs off change-ups than either of the hard-type pitches.

Beyond pitch type, we can look at Montero’s zone profile for home runs on balls in play to see another interesting trend with two strike counts. 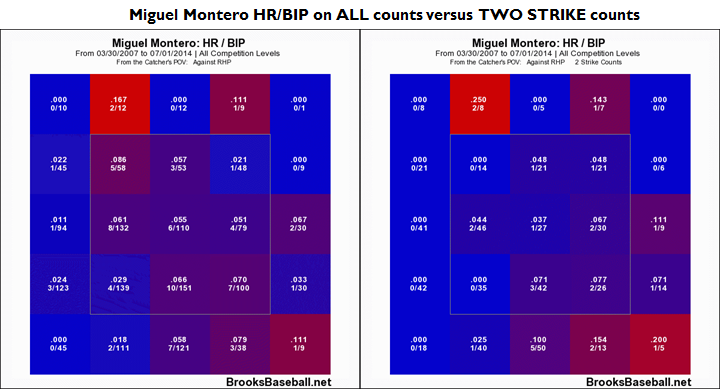 Usually, pitches down in the zone are harder to hit for long balls. As the zone profiles above demonstrate, Montero has had an uncanny ability throughout his career to hit pitches lower in the strike zone for home runs when there are two strikes in the count. Nine of the 13 home runs hit by Montero on pitches below the strike zone came with two strikes.

Miguel Montero has hit eleven home runs this season, including six in the month of June. More than half, six, of his home runs have come with two strikes in the count. What we are finding with Montero is that pitchers don’t necessarily find safety, when it comes to power, in situations that are usually “comfortable” or favorable. Right-handers using their change-up against his lefty bat are often times victimized. And keeping the ball low in the zone doesn’t help much either. The point is that when there are two strikes on Montero, don’t expect him to choke up on the bat, flail at a righty’s out-pitch, or ground out on a ball low in the zone. Look for power!