The Diamondbacks’ bullpen has been pretty good this year. After two years of constantly being burned by the ‘pen, things have shaped up. Some of those past struggles were seemingly part bad luck and part poor pitching. When those things come together, well, you’ve seen the results; it’s not pretty. On the flip-side, a lucky ‘pen can be a nice thing to have, but it’s unpredictable and could implode at any given moment. The best bullpen is a truly good bullpen.

For what it’s worth, the Diamondback have none of these bullpens. Instead, they have a decent bullpen that’s performed average-ish, which is a nice detour from the last two seasons. Here’s the bullpen’s MLB rank in a handful of categories:

So we have a high strikeout bullpen that’s been good at stranding runners but has dealt with a Chase Field-induced high batting average of balls in play. FIP is the best measurement of true talent and it places the team squarely in the middle of the pack.

But the idea behind this post wasn’t just raw performance, it’s reliever consistency. And in this category, the D-backs shine. The Diamondbacks have had the sixth most consistent bullpen in all of baseball when comparing performance from month-to-month. While it would be nice to break things down into even smaller performance windows, a month-by-month comparison will suffice.

A good March/April gave way to average months in May and June. The team followed that performance up with two more solid months in July and August. Overall, the bullpen’s performance has been above average by FIP-, albeit by just a little bit. Again, this is a welcomed sign when looking at the big picture.

But let’s go a step further and look at it by individual reliever performance. Below you’ll see the same table with each reliever’s individual contribution. For innings and consistency’s purpose, I’ve limited the sample to guys with a solid contribution, not the up and down relievers who’ve just had a few innings here or there.

Now we start to see more wild swings in performance. As we’ve long known, relievers are volatile commodities who can see their stock soar and plummet without a moment’s notice. Because a table isn’t the ideal way to visualize this, let’s graph it, then discuss. Remember, the lower the number, the better. 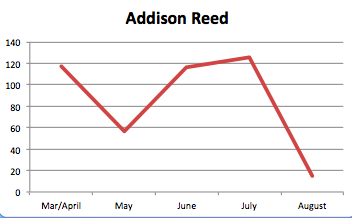 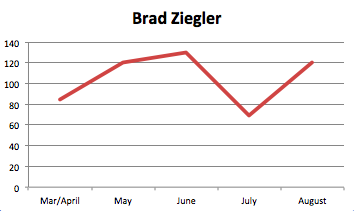 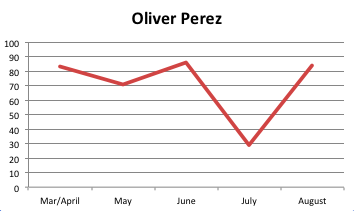 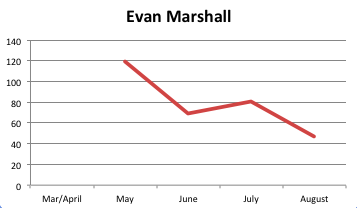 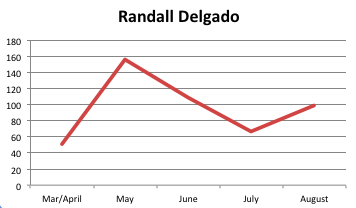 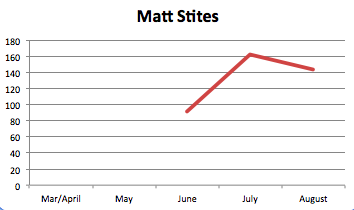 Although Arizona’s had a relatively consistent bullpen, we’ve seen some big changes as the year’s worn on. Closer Addison Reed has been wildly inconsistent, as you’d expect having watched his performance this year. Brad Ziegler‘s even had his struggles, and uncharacteristically so. Oliver Perez has been the most consistent reliever and Evan Marshall has gotten better as the season’s progressed. Randall Delgado has been consistently around average while Matt Stites has had his struggles and Eury de la Rosa had a poor July and a good August. When we look at the parts rather than the sum, the “consistent” bullpen has certainly had it’s ups and down.

What does this all mean? I think it shows just how volatile a bullpen is at the reliever-specific level. As a unit, they’ve appeared good but it’s hardly been that from time to time. Remember, this bullpen is essentially average, and the “average” bullpen can still be a rocky one. Ask any manager what they’d most like out of their bullpen and I’d guess that “consistent performance” ranks near the top of the list. For example, Addison Reed’s FIP- on the season is 86. But he’s spent three months well below average only to salvage it with a filthy August.

When the bullpen comes into play, you never know what you’ll get. This has been a consistently average bullpen, but it’s been anything but truly consistent. Perhaps the largest takeaway is the need for starting pitching that alleviates the need to go the bullpen in the first place. With some quality starters on the free agent market this year and some promising arms down on the farm, buying and/or developing starting pitching that can be counted on is likely the best way to avoid this whole conundrum altogether.