Why is Jeremy Hellickson Not Pitching Bad?

Jeremy Hellickson‘s season stats are pretty bad. An ERA of 5.08, just over six strikeouts per nine innings and nearly three walks per nine, too. None of that is good by any measure. And none of that is a big surprise as Hellickson just isn’t an impact guy any way you want to paint it. As Ryan and I discussed on the latest episode of The Pool Shot, the signing of Hellickson was strange to start with as he just doesn’t really fit the team’s window of contending, isn’t cheap in terms of salary and wasn’t cheap to acquire. But he’s in Sedona Red nonetheless and now we get to evaluate him. Oh joy!

If I sound cynical, it’s because I am. Jeremy Hellickson was basically terrible to start the year and I don’t think anyone’s going to disagree with that. Outside of one start in April, he pretty much stunk it up through mid May. But something’s changed and he’s actually pitched better of late. Now, the tough part is figuring out if that’s due to luck or it’s due to something tangible. As we know, pitchers have virtually no control over what happens once the ball leaves their hand, so there’s a ton of noise out there and very little signal. But if there’s any signal at all, well, just maybe we can find it.

Let’s just take a brief look at his starts by a couple of metrics. ERA is something you probably know about since you clicked on this website and it’s about baseball. FIP is probably familiar, too, and it uses some very basic peripherals to detect what should have happened (as shown by pitcher talent). SIERA is similar in that it also shows what should have happened, but it uses a few more inputs, including some batted ball data, and is largely considered the most accurate measurement. Here are Hellickson’s ten starts by each metric. 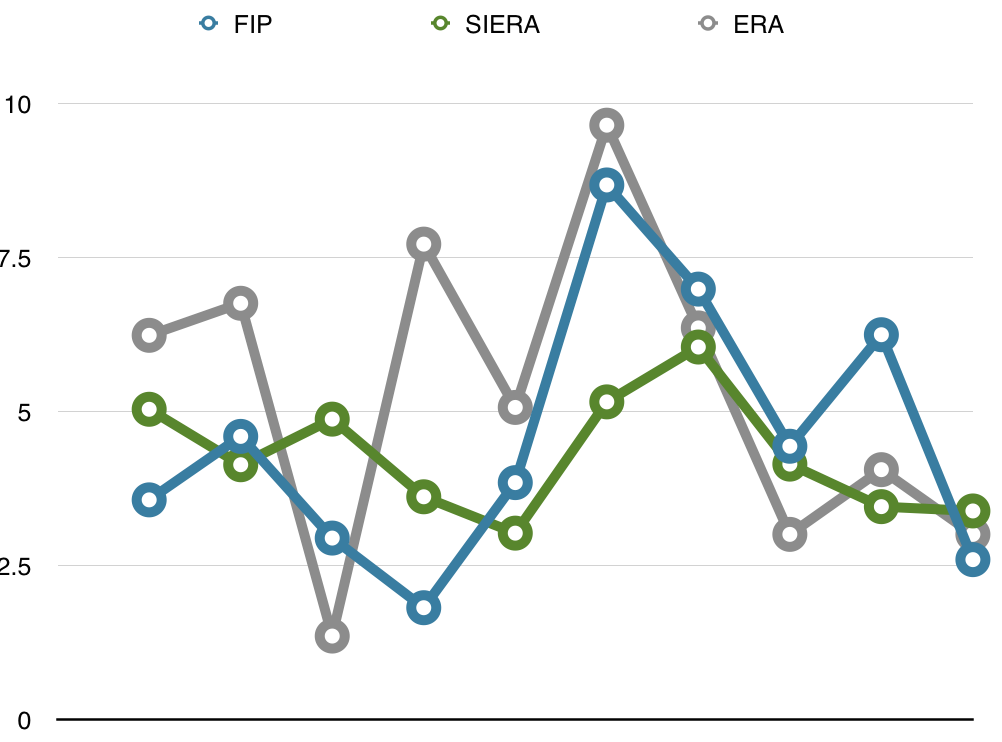 The ERA line is pretty wild, and outside of his third start, was trending horribly before May 19th when it started to move in a better direction. The FIP line is more balanced, but there are some big swings in it, too, mostly because Hellickson has been inconsistent. The SIERA line is the most stable of the three, hinting at the fact that it’s the best measurement. We can’t exactly expect that Hellickson forgot how to pitch on May 8th but remembered again on May 30th since this is what he does for a living. And see some of those big, big gaps? Those are the games where he was either exceedingly unlucky or lucky. But look at his last four starts. There’s almost no gap at all, suggesting that what should have happened is exactly what’s taken place. That would tell us that this is more or less exactly who Jeremy Hellickson is.

But what about those peripherals? Those are really important to stats like FIP and SIERA. Here are Hellickson’s strikeouts, walks and hits over the season. 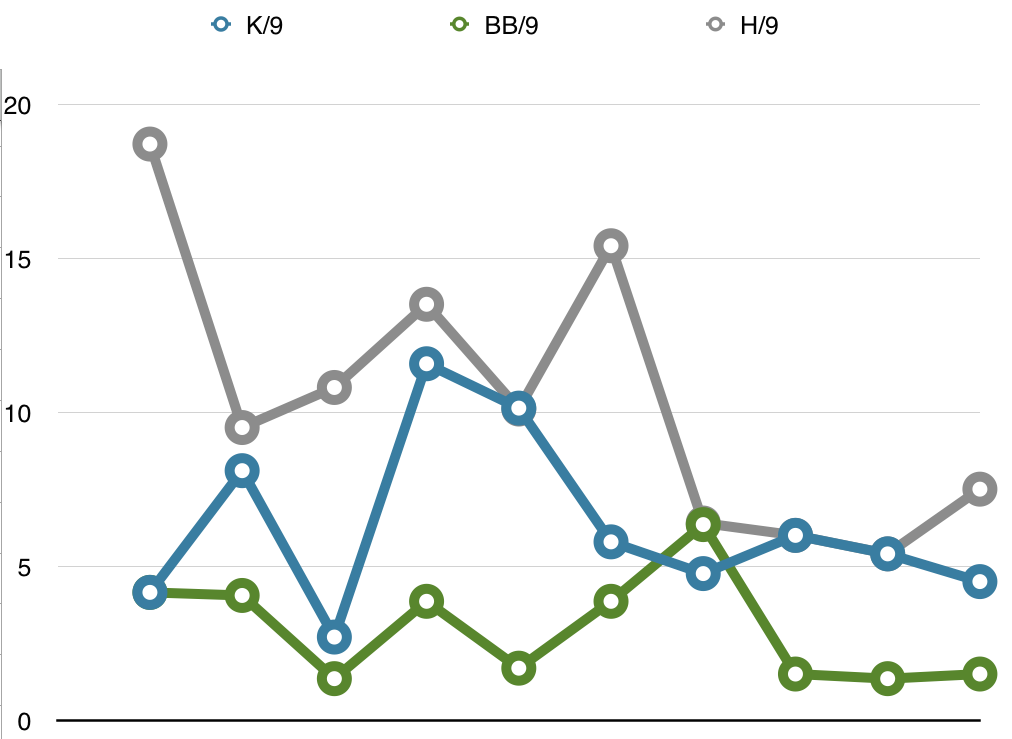 Simply put, Hellickson was getting hit all over the place in his first six starts. Coupled with a few more walks than you’d like to see, that’s a recipe for disaster. His strikeout rate has been all over the place, but notice that when it was at it’s highest, so were his hits. That might suggest that he was throwing too many pitches over the plate. Enough to get K’s, but also enough to get whacked. In his last few starts, the hits are down, the walks are, too, and the strikeouts are about where we’d expect them.

Hits are unpredictable to a large degree, though, so maybe we try not to read into that too much. Instead, let’s look at what’s happened when the ball’s been put into play. Using soft, medium and hard-hit data, maybe we can glean something from the contact he’s allowed. 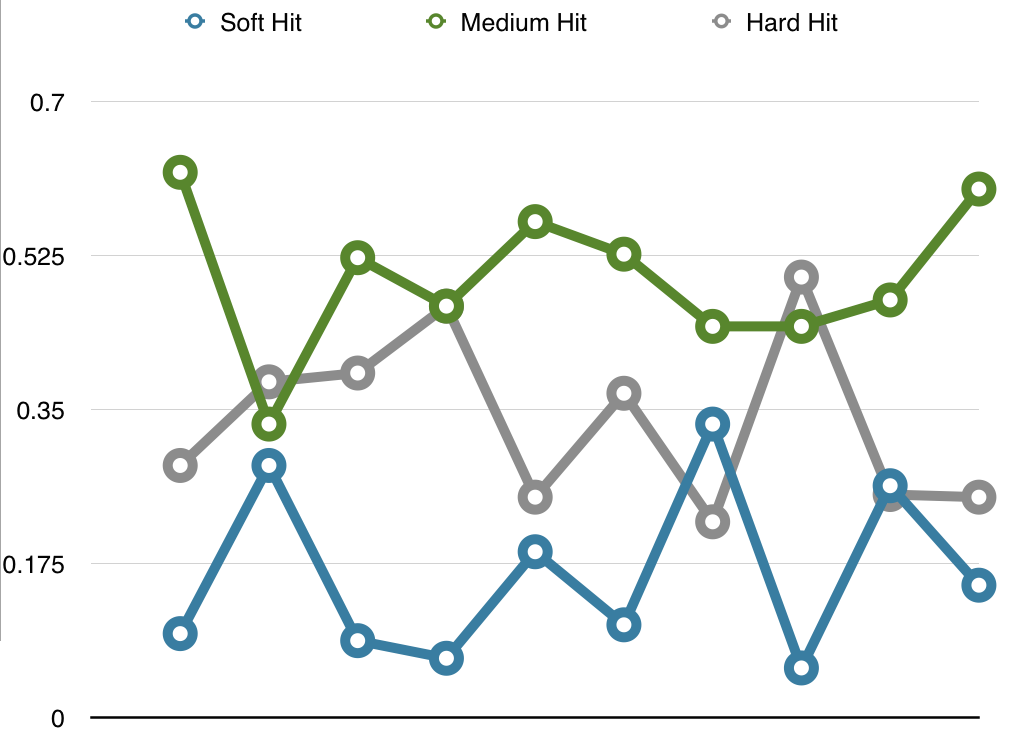 Obviously hard hit balls are bad and soft hit balls are good. Helickson has had a reputation as a guy who could manage his contact in the past, something few pitchers are able to do. In his good seasons in Tampa Bay, he managed to generate a ton of soft and medium contact, limiting hard-hit balls. Since then, he’s been more pedestrian, and at times, downright bad. In the graph above, we can see that the soft hit balls were way down when he was getting smashed and has crept up in his better starts. The hard hit balls work conversely and the medium hit stuff is pretty steady. So he’s either not giving up the hard stuff and getting by or getting popped and, well, yeah you know what that looks like.

And really, that’s part of the bet on Hellickson to begin with. Can he get back to being a guy that posts well-belove average BABIP’s with regularity? We know that BABIP for non-pitchers hovers somewhere between .300 and .305. He was able to do that when he came up and for the two following season, but since then, he’s been posting average-isn BABIP’s and the results have tanked. Observe: 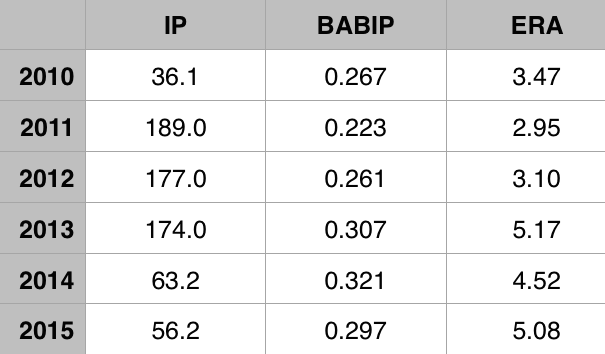 You may have known that from some of the previous work at this very website, but the point still stands. And if you’re asking me if I’m willing to bet on Jeremy Hellickson managing contact going forward and returning to form, the answer is a resounding ‘no.’ What he did previously was unsustainable and it eventually caught up with him. The D-backs traded for him anyways. I didn’t like it then and don’t like it any more now.

But he has been better lately. And although there’s some evidence that he’s been hit less-hard as of late, if you want me to believe that something has changed to the point that what we’ve seen lately is going to continue, I’m going to need to see something more tangible. Something drastically different. Oh, and guess what, that “something” actually exists. Here is Hellickson’s heat map for his first seven starts, most of which were very bad: 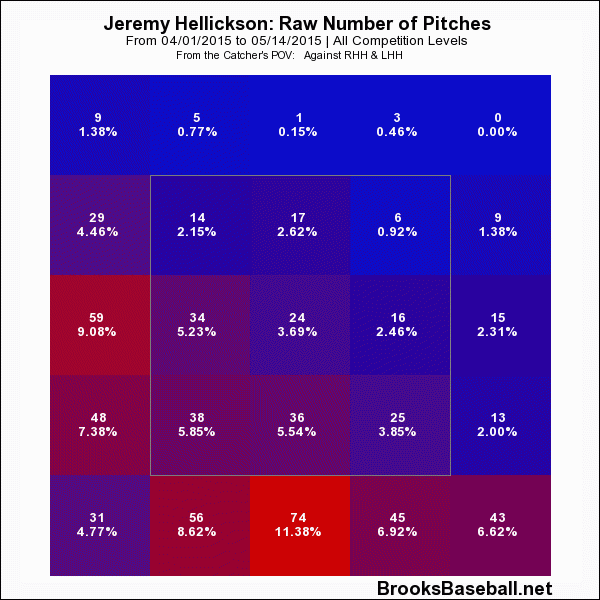 And here is his heat map for his last three starts, two of which were good and one was pretty okay: 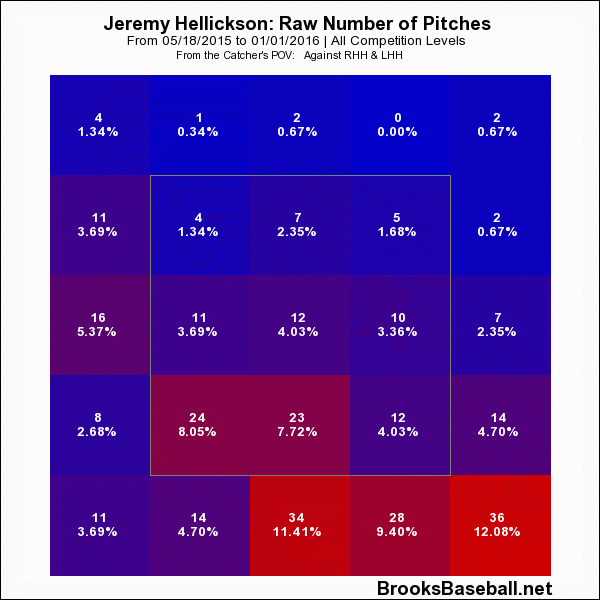 Well damn, that’s drastically different. He went from focusing low-and-away to righties and down-and-in to lefties to the exact opposite. It’s only three starts, but we’re not looking at a minor shift here. This is way different. He’s had 18.2 innings over those last three starts, enough to prove that this isn’t a mirage of a series of short starts. This is for real.

What does it mean? I don’t really know, to be honest. Maybe he’s found something that works. Maybe he’s just made an adjustment that hitters will catch on to and exploit. I’m not sure. But it’s been working and it’s transitioned him from terrible to serviceable in short order. With Josh Collmenter and Archie Bradley being bad these days and never knowing what to expect from Rubby De La Rosa, this is surely a welcomed sign.

We’ll have to keep close watch to see if it stays around or not, if the results stay around or not and whether or not Jeremy Hellickson can continue to contribute something positive to this team. I will say this, I’m more apt to believe in his newfound success with a change in approach than I was in his ability to limit hard contact. But that doesn’t make me a believer in Jeremy Hellickson, at least not yet.

2 Responses to Why is Jeremy Hellickson Not Pitching Bad?