Can the D-backs Enter the 2015 Playoff Picture?

It was a pretty big deal when baseball unveiled their plans to add a second Wild Card team to the existing playoff structure for the 2012 season. The single Wild Card system had been in place since 1994, and in case you don’t recall, there was no such thing as a Wild Card in baseball prior (unless you count what happened in a strike-shortened 1981). You had to win your division to play in the postseason from 1969 through 1993. Since then, baseball has progressively made the postseason more inclusive at the expense of a little complication. And by complication what I really mean to say is competition, a competition that, believe it or not, the Diamondbacks now find themselves in the middle of. Kind of.

The Diamondbacks were 42-42 before they took on the Mets last weekend. Mount Five Hundred had been scaled. Unfortunately, when the team got to the top, they realized it was a false peak; that the real work was still ahead. And it was going to be steep. They proceeded to stumble and get homered in sweeping fashion. Arizona limped into the All Star Break at a 42-45 mark, something that is respectable considering where this team has been in the recent past yet, distant enough from the rest of the pack that they really aren’t contenders. Then again, after three underwhelming seasons, playing games with the intent of playing more games in October is pretty appealing. The organization is squarely at a crossroads and if they choose the wrong path they could do considerable damage to the future success of the team.

When Ryan and I teamed up to discuss and write The Midseason Plan last week, we started with a simple question: where are we? The D-backs aren’t so bad that they’re obvious sellers and they’re not so good that they’re obvious buyers. Instead, they’re part of the malaise that makes up the middle of the major league standings. If they really wanted to, they could make a push for the postseason. They could also sell a few pieces in attempts to position themselves more favorably for upcoming seasons. They do have choices and that scares the hell out of me. This organization has had a hard time making proper evaluations in the past if you don’t recall.

But after some cursory analysis, the answer here is obvious: the Diamondbacks can’t be aggressive buyers. They’re simply too far from contending from a games-won perspective to give it a serious try. If it seems like they’re good this year it’s probably because you watched them last year and by the end of April, postseason life was hopeless. 2015 has been comparatively better by several magnitudes, but the reality is still that of a team that’s behind the curve. Take a look at the current NL Standings:

The Diamondbacks are the definition of a middle-of-the-pack team. They have some real bright spots but some glaring weaknesses and when it all washes out, they’re right there in the center of the heap, a shade under .500. That’s more or less what we predicted before the season, even though some publications projected them as among the worst teams in baseball. They’re better than that, clearly. But how many games would they theoretically need to win in order to make the final Wild Card spot? Let’s look at the last three seasons, the ones with a second Wild Card added, to find out. 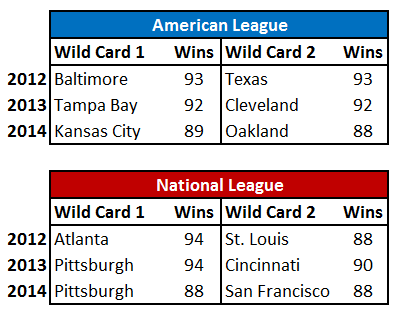 The low-water mark for a team to sneak into the postseasons since the second Wild Card was added is 88 wins. The A’s, Cardinals, Pirates and Giants have pulled that one off. In 2013, no team was admitted in with fewer than 90 wins. If the Diamondbacks win games in the second half at the same rate as they won games in the first half, they’ll win 78.2 games. Let’s use our brains and round that down to 78 wins. Assuming none of the top performers get hurt or slump and that there are no second half breakout surprises, or there are plenty of each but they balance out, you’re looking at a team that needs to finish the second “half” of the season 13-games over .500. That sounds like a lot because it is.

But, we don’t have to use this crummy, cell phone-calculator math to project the team’s record. Instead, we have projection systems that can take thousands of things into consideration all at once. They can regress a breakout that’s not likely to last and boost the performance of a proven player who’s gotten off to a slow start, baking in the things that tend to even themselves out so we don’t have to overvalue the first part of the season when trying to decide a team’s eventual record. That might sound complicated, but rest assured that it’s these kinds of models that teams consult when making big decisions. Sure, they have their own, but for the rest of us, we’re in luck with FanGraphs’ (a blend of Steamer and ZiPS projections) and Baseball Prospectus’ (PECOTA) systems. Let’s have a look at the projected records of every NL team, along with their odds of making the playoffs. 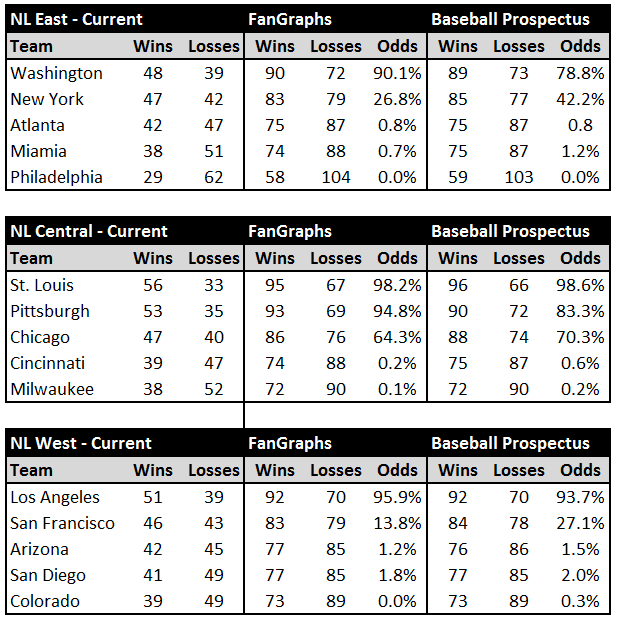 The Cardinals, Nationals and Dodgers should all win their divisions. At this point, it would be surprising if they didn’t. The Pirates are in the best position to capture the first Wild Card berth while the Cubs, Mets and Giants can slug it out for the final one. As it stands now, no one else really has much of a shot. There are seven teams with a chance and everyone else is getting some early practice in for 2016. The D-backs are part of the latter group, and if they do nothing to improve their odds, they just don’t realistically have much more than an 1:50 chance, even if you’re being optimistic. And you could argue that they should do something to improve said odds, but remember, deals aren’t made in a vacuum and even if Arizona were to make a move or two in attempts to improve, multiple teams ahead of them in the current standings will do the same.

And what would a move to improve look like? Word on the street is that the Padres are looking to possibly get out from under the deal they gave to James Shields as things just haven’t worked out like A.J. Preller expected them to in San Diego. If you don’t recall, the D-backs made a considerable pitch to Shields and thought they had a chance to secure his services before he ultimately ended up as part of the massive Padres Overhaul Effort of 2015. He’s owed some serious cash between now and 2018 (2019 if his option gets exercised), but he sounds pretty available. If a hypothetical deal were to transpire and Arizona were able to snag him now, deferring some of the cost to San Diego and not getting taken to the woodshed in terms of prospects, how much might he improve the team?

To figure it out, we need to do two things. First, we need to know who’s getting punted from the D-backs’ rotation to make space. I’m not booting Chase Anderson and I’m not booting Robbie Ray. Patrick Corbin is back to stay, too. So it’s down to Rubby De La Rosa and Jeremy Hellickson, two guys the team traded for last winter. You can more or less take your pick here, but Rubby strikes more guys out and generates more grounders even if he has had some severe home run problems, plus I’m more interested in his development long term and the projection systems like him a little more. So, say “bye-bye” to Hellickson and his projected 0.8WAR over the remainder of the season. We get to add Shields’ production to the fold and he’s projected for something like 1.5WAR over the rest of the year. After some basic math, the Diamondbacks, in trading for James Shields and demoting Jeremy Hellickson, gain something between a half and a full win of value. That’s it. A trade for a “big name” pitcher this late in the season nets the team a win if they’re lucky. Hell, for argument’s sake, let’s say Shields pitches like an MVP down the stretch and they gain 3WAR over Hellickson. If that were the case, they’d improve to, what, an 80-win team? That’s still at least eight wins off the pace of what we’ve seen from Wild Card teams in the new dual-Wild Card era.

I’m not sure where they’d be planning to find the other eight wins, but it won’t come from within. Paul Goldschmidt cannot get hotter. Asking for anything more out of A.J. Pollock sounds greedy and unreasonable. Yasmany Tomas isn’t going to turn into Miguel Cabrera and Jake Lamb won’t become Josh Donaldson. Patrick Corbin can’t be expected to revert right back into an All Star-caliber pitcher. Archie Bradley isn’t about to save the day and the bullpen has warts. Maybe James Shields isn’t the guy you want. Guys like Jeff Samardzija and Johnny Cueto might be available. Unfortunately, Samardzija is projected nearly identically to Shields and Cueto is only two-tenths of a win better. The Diamondbacks would essentially need two of these three just to make a discussion relevant, and they’d need them to outperform their projections down the stretch while losing no production from their current players and getting some help from the teams ahead of them in the standings. Those odds seem taller than scaling Mount Five Hundred all over again.

And this is why it’s important to know who you are. The Diamondbacks aren’t a bad baseball team. They’re an emerging one, but one that hasn’t come far enough to merit the type of aggressive wheeling and dealing that it would take just to give them a 30% chance of grabbing a Wild Card spot. Sure, they could go on one hell of a winning streak after the break and make all of this a moot point. Stranger things have happened. But managing a baseball franchise is about managing expectations, resources and knowing when to pull the trigger. Let’s hope that the front office knows the club’s place in the game and responds accordingly, because based off recent history, I’m not sure how much faith we should have. Sometimes less is more, and we discovered in The Offseason Plan, patience is a valuable thing. Then again, assessing value has been a problem all along.

6 Responses to Can the D-backs Enter the 2015 Playoff Picture?