Roundup: One Big Move Down, One to Go Reed For Davidson: Better For The Diamondbacks Than You Might Think

I heaped praise on Towers for his unusual bad-contract-plus-prospect trade two weeks ago when he moved Heath Bell, and derision on him last week for the Mark Trumbo trade.  Although it does make the Trumbo trade look slightly worse, the swap of Matt Davidson for White Sox closer Addison Reed looks very reasonable at first blush.  At the very least, the shift toward a younger bullpen is very heartening.

Despite the slight drop in velocity, Reed was much less hittable in 2013.  His WHIP went down from a pedestrian 1.36 in 2012 to an elegant 1.11 last season, in line with a drop in batting average against from .261 to .207.  One thing I generally look for is a steep drop in HR/FB, but Reed’s isn’t crazy (from 8.6% to 6.8%), and his 2013 HB/FB rate puts him tied for 39th among 135 qualified relievers.  It looks like Reed was less hittable, in part, because of a better line drive rate (21.6%) — and although batting average on balls in play is not necessarily a skill, the type of contact a pitcher induces can be.

A little more worrisome is Reed’s ground ball percentage, which is actually quite terrible (33.0%, 17th-worst among those 135 relievers).  Historically, Chase Field has not been a great place to be a fly ball pitcher (see: Heath Bell), but U.S. Cellular Field is even worse in that regard.  In the last two years, Reed gave up 9 HR in 80 innings at the Cell, but just 3 HR in 56.1 innings away from it.  Even if you think his splits will be as significant on HRs as they were with the White Sox, they shouldn’t affect his overall numbers.

As for the fly ball rate in general — Trumbo would have to be pretty bad in left for the outfield defense to be anything less than excellent overall, with Pollock and Parra out there.  And as this spray chart from ESPN Stats & Info suggests, it’s not like many of the fly balls were hit deep: 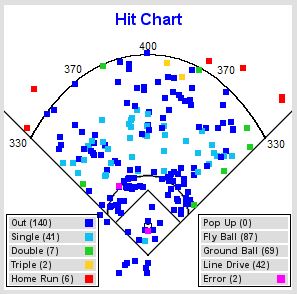 Fitting into the Bullpen

With the trade for Reed, the 2014 Opening Day bullpen looks pretty much set.  I’m not going to treat it is a foregone conclusion that Reed will close — since Putz started throwing the slider in his return at the end of June (the idea being, why be worse to avoid injury if you’re getting injured anyway), he pitched to a 1.42 ERA (4 ER in 25.1 IP).  Still, either way, Reed or Putz will handle closing duties, with the other a primary setup man.  Ziegler will be putting out fires that crop up in innings 6-8; Joe Thatcher will be the lefty matchup man; and Josh Collmenter will continue to be the long guy.  David Hernandez may not be given much leash in 2014, but since his 2011-2012 seasons were arguably better than Reed’s 2012-2013, we can expect him to at least start the season with the team.  Will Harris was arguably the best short reliever on the team in 2013, so it would be absurd not to include him.

That’s seven guys, though, so with the Reed trade, the chances of the team picking up a second lefty reliever have dimmed considerably.  Watch for Will Harris to be given more chances against lefties — his numbers may suffer overall, but he was actually much more effective against LHB (.215 batting average against, 9.28 K/9, 2.11 BB/9) than against RHB (.273 BAA, 8.90 K/9, 2.87 BB/9).

Another side effect of the Reed acquisition is that Marcos Mateo almost certainly does not get a shot to join the big league bullpen for the D-backs this year, unless one of the other guys gets hurt.  Ruling Mateo out is just a footnote for a trade like this, of course.

The D-backs bullpen definitely got better with the acquisition of Reed.  Still, this is yet another trade in which Towers did not quite extract full value for the asset he gave up.

Yes, Davidson might never be even a league-average starter at third base (although six years of league-average starter blows away the value of above-average reliever).  In the past, I’ve considered Davidson’s reasonable ceiling to be .250 BA, 25 HR, and league-average defense at third.  Even if that’s what he is, that’s a pretty good reason to be ranked among the game’s top 100 prospects.

Oliver projects Davidson at 20 HR in 600 PA for 2014, to the tune of 1.2 WAR.  Drop those stats into 2013, and Davidson would be 11th in home runs and fifteenth in WAR among third basemen.  Great?  Of course not.  But could Davidson get better after 2014?  Certainly.  And all at low, low prices.  That’s where this trade somewhat falls apart, because although Reed will again make the major league minimum in 2014, he’ll start to climb the arbitration latter in 2015.  And if he serves as the D-backs’ closer in 2014 (there is still an argument for Putz), those arbitration salaries may outpace his value as early as the 2016 season.  Once salary outpaces value, a player is no longer an asset.

Third basemen with power are scarce in today’s game.  Only 6 third baseman had more than 22 HR in 2013 (there were 7 in 2012), and with Miguel Cabrera moving to first (and with Ryan Zimmerman starting the same transition), there may be even fewer in 2014.  Maybe Davidson is merely David Freese, with slightly better defense.  But even St. Louis was happy to play Freese, so long as he was making the major league minimum.

At FanGraphs, Mike Petriello posted this morning on how Juan Uribe just got a 2 year, $15M contract from the Dodgers on the heels of a very good 2013, despite performances in 2011 and 2012 that “were the baseball equivalents of dumpster fires.”  I’ll let him drive the point home, concerning the lack of third basemen that were vaguely available as of this morning:

Looking at the third base free agent leaderboards, the only two players who even managed a single win above replacement in 2013 were Uribe and former teammate Nick Punto, who is more of a utility guy himself than an everyday player. If not Uribe, then the Dodgers would have been forced into exploring formerly famous people like Michael Young, or Eric Chavez, or Kevin Youkilis, all of whom were rumored to be under consideration (and who still might be options as bench players, possibly). Or possibly-not-available, yet surely expensive, trade targets like Chase Headley. Or giving up a draft pick to sign Stephen Drew and slide Hanley Ramirez over, or gambling on the injury-prone and aging Aramis Ramirez, or… well, you get it.

Maybe power doesn’t become more valuable than other types of creating runs just because power gets more scarce — but position players do get more valuable when good players at the positions they play do become scarce.  This was not a matter of selling assets at 50 cents on the dollar (at most) like the Trumbo trade, but it was still a matter of selling an asset at about 80 cents on the dollar.  If you always give more value than you get, and if you trade as much as Towers does, then you’re going to get burned in the long run.

Trading Matt Davidson for Addison Reed was not a good trade, value for value, but it was not terrible.  Even if Davidson were slated to be the every day 3B in 2014, the swap for Reed would almost definitely make the team better for next season.  Since Davidson was completely blocked in the wake of the Trumbo trade, the upgrade for 2014 is certain.

Acquiring Reed doesn’t look as good if the team ends up going into the season with just one lefty reliever, and if Will Harris gets bumped, adding Reed is less of an upgrade.  Towers clearly has a plan this offseason, so we’ll see how this shakes out.  It’s because of that plan, though, that I can’t really credit Towers for making the best of a bad situation in moving a player that became obsolete for a player that will almost definitely be helpful.  Making Davidson obsolete was part of the plan.  Still, I do not view this trade as a mistake, in part because I’m cautiously optimistic about the team heading in the direction of building young bullpens, and in part because Reed is a known quantity while Davidson is not.

The only emotion I have regarding this trade is a background sense of foreboding.  This trade has all the marks of one made by a GM in his final year under contract.  If Towers is pushing chips to the center of the table to contend in 2014, I hope it works, and I hope it doesn’t have us sitting out the next hand.