Goldschmidt mired in slump; who cares?

Don’t look now, but as of March 4th, Paul Goldschmidt is hitting .200 (3 for 15) in six Spring Training games. Sure, his first single knocked in a couple of runs, but Goldy hasn’t exactly started off the spring red-hot as we might have hoped. After a season in which he was nearly the NL MVP by leading the National League in home runs and RBI’s while stealing a team-high fifteen bases, he’s off to a start that makes Ender Inciarte look like an offensive force. What do we do now?

You read this website, so I know you’re intelligent. You’d never get worked up about 15 measly Spring Training at-bats, but the paragraph above should serve as a cautionary reminder: these stats don’t count and us fans shouldn’t worry about them. Each and every spring, there’s a large contingent that is freaking out because so-and-so had a terrible start or the team’s best player can’t buy a knock. Please don’t be one of those people.

In fact, the Diamondbacks should know all about the triviality of Spring Training statistics. Back in 2011, former Royals first baseman Kila Ka’aihue finished third in home runs at the end of the spring, slugging seven long balls while hitting .397/.462/.845. Now a Diamondback, he’s about to turn 30 as he prepares to enter his sixth season of AAA baseball. Shelly Duncan, a recent addition to the club, finished tied for fourth in Spring Training home runs in 2012 when he was with Cleveland, behind Freddie Freeman, Albert Pujols, Brennan Bosch and some guy named Matt Hague. Like Ka’aihue, Duncan isn’t likely to see any major league time this year unless there are sever and significant injuries in the Arizona outfield. I’m sure you’re picking up what I’m putting down: stats aren’t all that indicative in Spring Training.

Just as we shouldn’t get caught up with stats in the spring, we should also avoid getting carried away with wins and losses. As a life-long Mariners fan, I can remember all of the Seattle buzz last spring when the team racked up 22 wins in Spring Training. We all know how that story that ended. Notable, only one of the four winningest teams in the American League last spring went on to make the playoffs while the Pirates, Reds and Dodgers (all NL playoff teams) tied the Brewers for fewest Spring Training wins last year. I always root for the D-backs and they’d never lose if I had it my way, but a Spring Training loss is nothing to be concerned about.

The bottom line is that Spring Training is a lot like minor league scouting: you can’t read into outcomes and instead need to focus on the process. This is extremely difficult to remember at times, especially for us in the analytics community who want to things like stats that we can track and measure. In the spring, however, the victories are often the things that don’t even show up in the box score.

Archie Bradley was electric in his spring debut, striking out six and walking three while putting up zeroes on Monday night. That sounds fantastic, and I guess it was, but there’s more to that story. As Nick Piecoro accurately notes, Bradley nearly threw it all away in the second inning after walking Troy Tulowitzki and giving up a single to Wilin Rosario. He struck out Nolan Arenado, then got Kyle Parker to ground out before he loaded the bases by walking DJ LaMahieu. To get out of the jam, he struck out the pitcher, Christian Friedrich. He was able to get back on track and skated through the inning by the skin of his teeth, showing some resolve after a difficult frame.

Now, I’m just as excited as everyone else when it comes to the young phenom, but it’s important that we not get swept away with the stats. Six strikeouts in three innings is great, but control continued to be an issue for Archie. This was his only bugaboo in the minors and while he’s made just one appearance, we should remain skeptical of his ability to control the strike zone until he proves otherwise. This is just a matter of time, but until that time comes, let’s all take a deep breath.

On a different note, I had a chance to see Jake Lamb play last Saturday (in between rain showers) and came away very impressed. Lamb, if you recall, had a great season going at High-A Visalia and was heading towards AA Mobile before breaking his hamate bone. He came back at the end of the season, notably raking in the Arizona Fall League. He was invited to big league camp and really held his own as the starting third baseman on Saturday. He looked comfortable in the field and at the plate while notching yet another hit. Despite never playing above High-A, Lamb looks like the kind of player who can make it in the majors.

Trevor Cahill will start game two of the Australia series later this month and got the start for Arizona. His sinker was working early and although he’s had a tough time throwing it for strikes in the past, he was able to throw it for strikes often enough that Milwaukee batters had to respect it on Saturday. This pitch moves so much that batters were swinging and missing frequently and Miguel Montero actually dropped it on a couple of occasions, much like we’re accustomed to seeing with a knuckleballer. Of equal importance, Cahill had the curveball working, too, resulting in a couple of strikeouts and some other weak ground balls. Best of all, he walked only one batter in 3.1 innings. For a guy that really struggled at times in 2013, it was a nice start beyond the raw results.

I walked away most impressed, however, with Chris Owings. I’ve been skeptical of the kid all winter long and I really do like Didi Gregorius, but Owings made an impression. His approach at the plate was better than expected in my short observation. He took some close pitches for balls and showed a swing that should produce plenty of contact. His line drive stroke resulted in a double in the third inning after singling in the first. He still never walks and maybe he never will, but I came away with a belief that his bat and legs just might carry him enough in the majors to make up for the defensive gap between himself and Gregorius. While I’ve been bearish on him at times, he looks major league ready and deserves a legitimate shot to win the job, which it appears that he’s getting

Each and every spring game is a chance for players to grow accustomed to upcoming major league season. The results aren’t the most important aspect of every at-bat or every game. Indicators like a pitcher bearing down to get a much-needed strikeout, guys throwing breaking pitches for strikes and young players finding comfort against major league pitching aren’t adequately collected in the box score. So do yourself and everyone else a favor: don’t stress about the numbers. Instead, head down Salt River Fields in Scottsdale, get yourself a Goose Island IPA and pay attention to the finer things, not just stats. 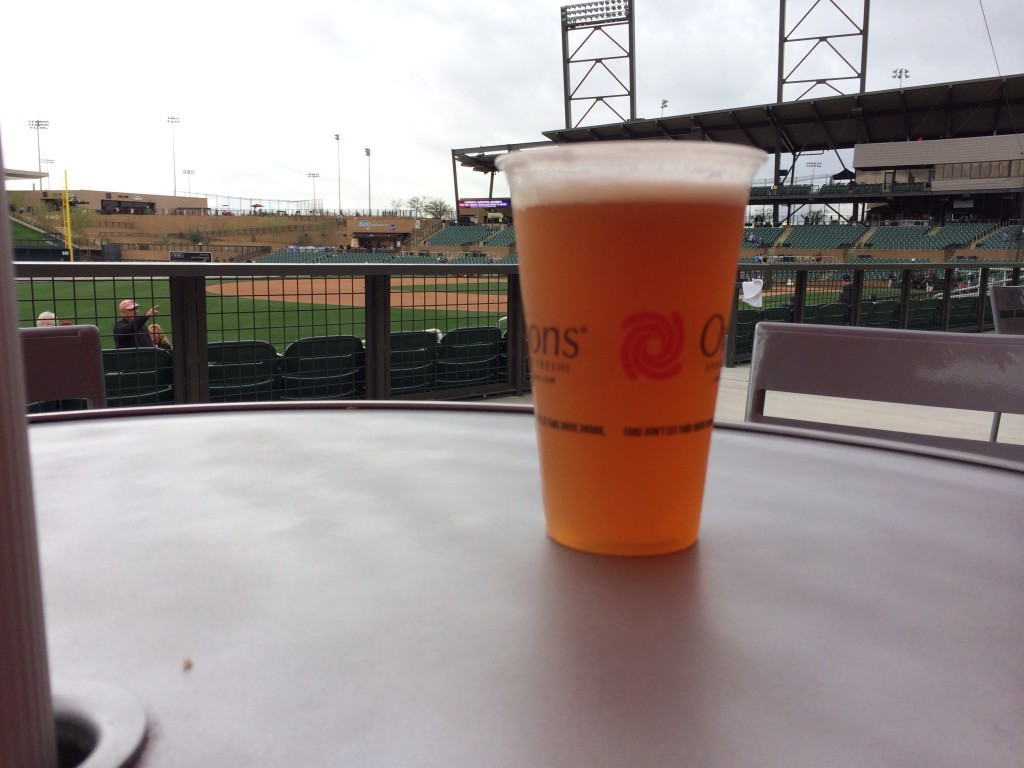 2 Responses to Goldschmidt mired in slump; who cares?