Do the D-backs lack clutch relievers?

Last week, we discussed the term “clutch” and whether it means anything when looking at a team or player’s numbers with runners in scoring position. We found that “clutch” is more abstract, based on our natural instinct to place greater value on certain players who we perceive to perform better in certain situations, but in reality, it is meaningless. The best hitters, over time, perform better than lesser hitters, regardless of the situation. They aren’t clutch as much as they are good hitters.

We then had Rod look at bullpens and one-run games. He noted that there is a correlation between holds and save percentage to team winning percentage, but in the end, teams who score more runs or have starters who prevent runs before the bullpen enters, have a larger impact on the success of the bullpen.

So when it comes to clutch performance among hitters or relievers, we have you covered. But there is one last point to consider. If the misconception of clutch hitting comes from looking at performance with runners in scoring position, does the same apply for relievers who pitch with runners on base? In other words, if a pitcher enters a game with a one-run lead, but there are runners on second and third, and then gets out of it, is he more clutch than the reliever who enters with the bases empty and succeeds? How much do runners on base matter to deciding which pitchers are clutch? For the Arizona Diamondbacks, this is an interesting question.

Whether by walk, hit, hit-by-pitch, or error, the D-backs have allowed the fifth most baserunners in baseball. A problem that becomes a really big one when once those hitters reach base, they often times score. Arizona ranks 28th in left on base percentage (LOB%). Of course, those are the team statistics, and we want to focus on the bullpen, so if we exclude starters, we find the D-backs rank 23rd in LOB%. Not good for starters or relievers. When a lot of hitters reach base and most of them score, you aren’t going to be very good.

There is a fundamental difference between evaluating hitting with runners in scoring position and pitching with men on base. A hitter comes to the plate at the benefit of someone else’s work. The two batters ahead in the order walked or got a hit. Now there is an opportunity to drive them home. For a pitcher, runners may reach base because of someone else’s work, or, it may be their own fault. We don’t necessarily want to praise a pitcher for pitching well or “clutch” with runners on base if the runners only got on base because of their poor pitching. We can use a statistic called inherited runners scored percentage (IS%) to account for this.

So which Diamondbacks relievers perform best with runners on base, and more importantly, leave the runners they inherited stranded? 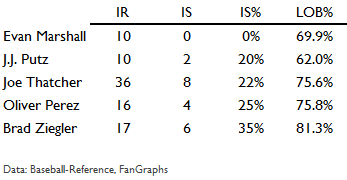 As the table demonstrates, LOB% can be a bit misleading. There is an inverse relationship, among D-backs relievers, between LOB%, which you want to be high because it means more runners are left on base, and IS%, which you hope to be low because it means baserunners who reached to no fault of the pitcher were left stranded. The table shows the D-back relievers who inherited at least ten runners (so Addison Reed and Randall Delgado are omitted).

So the next question is what does this tell us? Is Evan Marshall “clutch” when entering the game with runners on base? Is he somehow less clutch when he allows runners to reach base on his own? What about Brad Ziegler? It seems he knows how to pitch out of his own jams, but not as much for other relievers. Or is it because he has had more opportunities than Marshall, so over time more inherited runners are going to score? What really matters LOB% or IS%?

Taking away the context of runners on base, we can look at our group of relievers to see which have performed the best overall. Interestingly, whether we value LOB% or IS%, neither Marshall nor Ziegler have pitched statistically as well as Perez or Thatcher (given we are comparing different innings samples). Is Evan Marshall an average pitcher who turns clutch when entering with runners on base? Is the sample size just too small?

The league average IS% is 28%. The Diamondbacks rank 22nd as a team with an inherited runners score rate of 29%. The best team? The New York Mets, whose bullpen has the ninth lowest ERA in baseball. Of course, we are sort of talking about the same thing here. If you are good at stranding runners, you are preventing runs from scoring, so your ERA should be good. If we look at a more telling statistic, like FIP, which measures things that a pitcher controls, such as strikeouts, walks, and home runs, the Mets bullpen ranks 21st. If we think of strong bullpens this season, the Red Sox and Nationals jump to mind. They rank 4th and 16th, respectively, in percentage of runners stranded, and the Nationals have the lowest FIP, with the Red Sox seventh smallest.

Without doing any real statistical analysis, we are seeing that the results differ depending on the player or the team. It is intuitive that pitchers and teams who leave more runners on base are going to be better overall. But are the pitchers who do a better job at stranding runners more clutch? We still haven’t found our answer.

Morris Greenberg of Batting Leadoff did a compelling analysis recently of the sustainability of LOB%. Thinking about pitchers who are clutch, we often times overlook particular skills that might make them appear clutch, but are in fact inherently useful in clutch situations. For a pitcher, that would be BB%, CS%, and (XBH – HR)%. Three factors that would help advance runners who are already on base, and thus improve their chances of scoring. Doing a regression analysis, Greenberg found that pitcher skills do impact the key factors in sustaining LOB%. An important conclusion since we can safely presume that the same skills apply for stranding inherited runners.

So that leaves us with one final table. Which Diamondbacks relievers are the most skilled at the characteristics found to positively correlate with leaving runners on base?

Since (XBH – HR)% has the highest correlation to LOB%, we can see that Brad Ziegler’s team-leading 81.3% LOB% makes sense. In fact, if we include his 2012 numbers, giving us a two-year sample, we see that the number doesn’t change much, his LOB% is 80.9% over 113.1 innings. While Evan Marshall has had success this year in stranded inherited runners, we can see that his luck is unlikely to continue with an inflated walk, extra base hit, and home run rate.

Clutch is an overused word in sports. We know especially for hitters, that it is pretty much meaningless. When it comes to pitchers, it depends on how you want to use the word. Good hitters are good hitters regardless of the situation. The same goes for pitchers. But there are definitely certain skills that help a pitcher perform better in what we would deem a “clutch situation.” For the Diamondbacks, outside of Ziegler, they can use some more of those skills in their bullpen.

Statistics courtesy of FanGraphs and Baseball-Reference.
Tagged with: Bullpen

5 Responses to Do the D-backs lack clutch relievers?