Say what you will about the D-backs’ beleaguered pitching staff, but even with injuries to Mark Trumbo and A.J. Pollock, the D-backs’ offense has been slightly better than average — you might even say good, in some ways. But they’re accomplishing that while being among MLB’s worst in taking walks and driving the ball. And although it fights against the normal sabermetrics instincts, you might even be able to say that’s a good thing.

The club was recently overtaken in games played (finally), and while they’re still among the league leaders with 92 games, a difference of 2-3 games is a lot less significant than it was the last time we checked in on the offense generally. Still, with the D-backs hovering right around the league average number of runs scored, it’s rate statistics — as opposed to counting statistics — that may be most enlightening.

Take the classic, for instance: batting average. The D-backs rank 12th in BA in the majors, and considering 5 of the top 6 teams are in the American League, that’s no small accomplishment. They have the exact same rank for slugging percentage, and so it seems like the D-backs’ hits have been extra base hits at a normal rate. And it looks like the D-backs have earned the hits they’ve gotten, too: their batting average on balls in play (BABIP) is .298. The league average? Exactly .298. It seems pretty clear that at the plate, the D-backs have not been the beneficiaries or victims of luck so far this year.

Here’s how the D-backs offense stacks up (all stats courtesy of ESPN Stats & Info):

The D-backs are 14th in the majors in runs scored — 6th in the NL, just above average. But where the team’s batting average and slugging marks are right around average, their walk rate is terrible ( 6.4%, 29th in the majors). Compared to the league average walk rate (7.8%), that’s 42 walks “missing” — and borrowing from a run values of events chart, that’s roughly 22 “missing” runs (assuming the walks would replace outs). Theoretically, at least, if you replaced the D-backs’ walk rate with a league average walk rate, the team would rank 4th in the NL in runs scored, not 6th.

But let’s not beat the D-backs up for what they aren’t; let’s examine them for what they are. And what they are is a contact-hitting team. Led by Martin Prado, the D-backs have the fifth-highest contact percentage in the majors. Especially for a team in the NL, that’s huge. These guys don’t miss. The problem is that when they do hit the ball, they aren’t hitting it very hard. Despite doing fairly well in slugging, the D-backs’ hard-hit average is very low.

This may just be because they’re getting a better-than-average number of the balls they swing at in play — maybe it’s those extra balls in play that are weakly hit. But this is not a team that regularly hits the ball on the screws. 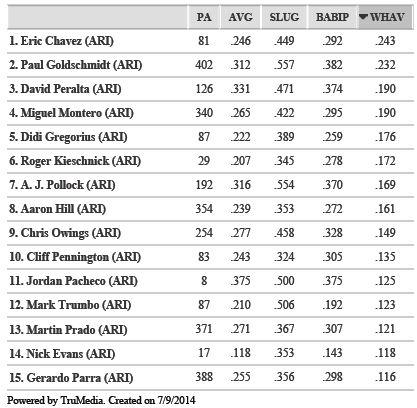 Revealing, no? This “hard hit average” statistic (abbreviated as either HHAV or WHAV), proprietary to ESPN, really seems to shed some light. Goldy has an insanely good BABIP, but that’s backed up by the fact that he’s really spanking the ball all over the place — to get in the top 10% of hitters, you’d need a hard hit average of .190 or better, which Goldy clears with ease. Meanwhile, there’s also some reason to think that David Peralta’s hot start isn’t about luck — he’s hitting the ball with authority. And on the other end, we can confirm that Gerardo Parra really is not doing so hot, and something may be wrong.

But back to the point: the D-backs offense, on the whole, has been a contact-style offense. It’s not Paul Goldschmidts and Miguel Monteros up and down the lineup — as much as we might love that, it’s just not in the cards. Is that a problem? Maybe not. Allow me to excerpt a nugget from a recent interview with Bill James, the father of sabermetrics:

We are hung up on bat speed, as an industry. All scouts look for bat speed, and if the ball doesn’t jump off your bat, it’s very, very hard to get drafted. This has excluded from the majors now a type of player that I think of as a Nellie Fox-type player. Such an old reference—we might call it a Brett Butler-type player or a Tony Gwynn-type player. Very slow bats. I believe there’s a big potential payoff for an organization that says, “Okay, well we don’t care if the ball jumps off your bat or not. We’re looking for guys who make solid contact all the time.” But the reason I can tell you about this is the Red Sox can’t do something like this, and the reason the Red Sox can’t do something like this is that we can win playing by the rules everybody else is playing by. So the team that gets to [disregard bat speed] is the team that doesn’t have the resources to go head-to-head with the Red Sox and the Dodgers and the Yankees and come out on top.

Count me among the folks who think that maybe the D-backs don’t have the resources to go head-to-head with the Red Sox, Dodgers, and Yankees and come out on top. Maybe, then, James is right and “slow bats” are one of the next inefficiencies. We’re talking about guys who grit out at bats…

Did the Towers/Gibson team dream this up, and purposefully rely on “slow bat” types like Parra and Prado? I’m not so sure about that. And James’s comments were less about how to dole out playing time or handle player acquisition via trades. One way to beat the market, James is suggesting, is to target amateur players who seem to have high batting average, but who have not aroused other teams’ attentions because they don’t have the sexy bat speed that scouts love.

If Towers and Gibson are content to field a major league team that sort of fits that mold, might they be willing to go in a similar direction in the minors, despite it being unconventional? I’m not sure. But if the team were looking for a way to both corner an inefficiency and keep the current management team in place, moving in the “slow bat” direction through the draft and in minor league development could be a perfect match for what “gritty” is all about.