We all know the story from last year: after the Derek Jeter comparison, Didi Gregorius took the National League by storm, only to see his batting average drop each consecutive month for the rest of the season. But lost with his .182 batting average in September was this: he was actually an above-average hitter. It was just 40 plate appearances and Gregorius was kept away from southpaws, but in that month, Gregorius walked more than he hit.

This was a real trend last year, working opposite the batting average drop. Gregorius’s walk percentage was just 3.3% in April, still under 8% in both May and June, but 12.7%, 8.8% and 17.5% for the season’s last three months, respectively. As a general rule, 10% is considered a good BB%, and last year, the average for non-pitchers was 8.1%. Last season, then, Gregorius was showing signs of OBP being a strength.

There’s reason to believe this increased patience or eye for the strike zone is a real adjustment. In Triple-A with the Reds organization, Gregorius’s BB% was 5.9%; his rate at all other significant stops in the minors fluctuated right around that. But after raising his BB% to 9.2% in the majors last season, Gregorius kept that new rate; his BB% was exactly 9.2% with Triple-A Reno this season. In his brief time in the majors this year, Gregorius’s BB% is 10.7%.

His OBP has actually gone down this year (.324) from last year (.332), but that’s attributable to a drop in batting average (from .252 to .221). The good news? Although Gregorius has a decent shot at keeping his enhanced walk rate, he also has a decent chance of seeing his batting average rise. His .290 BABIP last year was just a tick below league average, and his .253 BABIP this year is unsustainably low.

In terms of Gregorius’s chances of combining his higher walk rate and a bounce-back BABIP, though, theory may be trumped by reality. The OBP projected for the rest of the season by ZiPS (.317) and Steamer (.313) aren’t even optimistic that Gregorius can keep his current OBP of .324.

Basically, Gregorius isn’t really showing us anything new, although there are some minor signs for minor optimism, including offense that was well above average at Triple-A (123 wRC+) earlier this season.

Gregorius has been below average in the majors this season (86 wRC+), but that kind of rate could still make Gregorius an above average regular — if he offered above-average offense. Considering that Baseball America named Gregorius the top defensive infielder in the Reds org after the 2011 season, and in the D-backs org after the 2012 season (and the top defensive SS in the Southern League that year), the prospect of very good defense was not a pipe dream.

But it hasn’t really panned out in the majors, for some reason. Check out these numbers:

Last season, UZR had Gregorius just a tiny bit below average for a shortstop. That included every aspect of Gregorius’s game with the glove that UZR measures for middle infielders: skill at turning double plays (DPR), defensive range (RngR), and skill at (not) booting plays (ErrR). Defensive Runs Saved agreed, giving Gregorius a mark just below zero.

This season, Gregorius had rated worse in less than a  fourth of the time. Take Gregorius’s UZR mark and prorate it up to a full season, and you get a -37.7 UZR/150. That’s actually quite bad, let alone being good.

Is Gregorius a bad-fielding shortstop? I doubt it. We know from experience that we need about three seasons’ worth of advanced defensive statistics to begin to gauge a player’s true skill level. But UZR and DRS are still a pretty reliable record of what happened, as opposed to skill level, and what’s happened so far in Gregorius’s major league experience at shortstop is not impressive.

Gregorius has amassed 390 plate appearances against RHP in his major league career and 147 against LHP. It’s not unusual for players to have platoon splits, of course, and it’s not unusual for a left-handed hitter’s split to be more pronounced than that of an average right-handed hitter. But Gregorius has a fairly enormous split: solidly above average against RHP (111 wRC+), and very bad against LHP (32 wRC+). For reference, the worst wRC+ put up by a D-backs player with at least 100 PA so far this season is Ender Inciarte (55 wRC+). 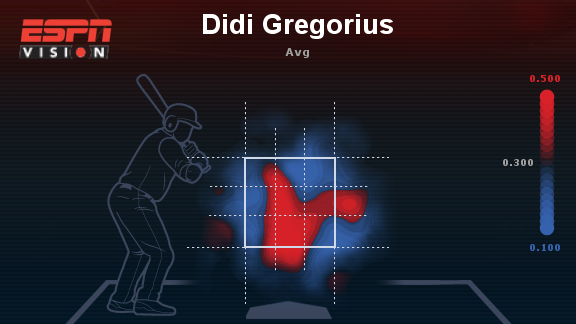 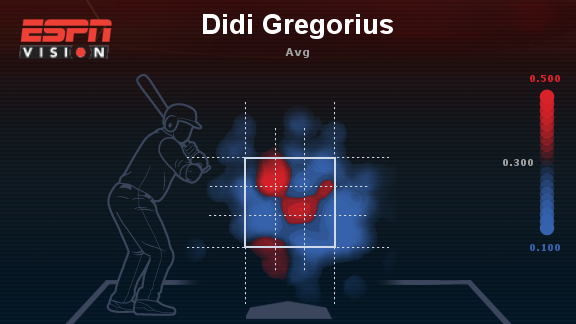 That’s a pretty stark contrast. And, parenthetically, the heat map shows all the hallmarks of a player who has fairly good skill matching bat to ball up and down, but little success moving the bat in or out to “sweetspot” the ball. Hence Gregorius’s low career “hard hit average” of .163. That hard hit average also has a platoon split, by the way: .175 against RHP, and a lowly .133 against LHP.

Left-handed-hitting shortstops are fairly rare, with, as far as I can tell, more switch hitters (since all 2B, SS, and 3B throw right-handed, most are natural righties). That might make for an opportunity, since Gregorius could theoretically mesh well with other infielders.

Remember the 2012 season, when Gerardo Parra was a floating left-handed outfielder, getting subbed in most frequently against RHP? The D-backs could do something similar in the infield, with Gregorius subbing in for either Aaron Hill, Chris Owings, or Martin Prado on every day that a right-handed pitcher is starting against the team — and sitting for the beginning of every game in which the club faces a LHP starter.

That could be a very effective system in 2015, although there’s no place in that for Nick Ahmed (although Ahmed and Gregorius could form a possibly effective platoon at short if Hill departs and Owings is moved to second base). But if that’s who Gregorius really is — a player who should only start about 60% of games — it’s hard to see many teams giving up much to acquire him.