Minor League Update: Braden Shipley an All-Star, Aaron Blair Notes and Home Run Derbies What If: There Was No Paul Goldschmidt This Season?

A bad closer on a bad team is bad news. So Diamondbacks fans have reason to be frustrated with Addison Reed and manager Kirk Gibson’s decision to keep him in the closing role. Reed blew his fourth save of the season on Tuesday, he is pitching to a 4.15 ERA (4.57 FIP), and his always troubling HR/FB rate has ballooned to 18.2%. We asked the question earlier in the season if Reed is too homer-prone to be a closer, and the answer seems to be yes.

In Reed’s four blown saves and two losses this season, he has allowed five home runs. In the thirty other games that he has pitched, he has allowed only three home runs. Basically, when Reed serves up a long ball, the outcome is ugly, which makes sense considering that he pitches in situations with little room for error. What is interesting is that Reed hasn’t allowed a home run in nearly a month, since June 7 against Atlanta. His two most recent blown saves have come as a result of inherited runners, walks, and hits. His peripherals are good (high strikeout rate, low walk rate), but he has been ineffective in doing his job of getting key outs too many times this season.

I started this post by saying, a bad closer on a bad team is bad news. A cliche about a cliched role, the closer. The point is that a bad reliever, closer or not, who pitches in critical situations is bad news for any team. Addison Reed hurts the Diamondbacks whether he is serving up home runs in a one-run game in the 9th, or doing the same in a one-run game in the 7th. Taking away his closer role doesn’t change the fact that he is prone to give up home runs, which in tight situations, hurt the team. If there is debate on whether Reed is suited to be the closer, the same debate should hold on whether he is suited to pitch in tight situations at all.

In order to fairly evaluate relievers, we need to consider the situations when they pitch. Tom Tango created a statistic called leverage index that measures how important a particular situation is in a baseball game depending on the inning, score, outs, and number of players on base. We can compare a closer, who gets all of the credit for pitching in “tight” situations, with a reliever who gets big outs earlier in the game. A tie game in the 8th inning may carry a higher leverage index than a three-run lead in the 9th inning.

Looking at the Diamondbacks relievers this season, and using gmLI, which is the average leverage index of the games each pitcher made an appearance, we see who pitches in the toughest situations. We can then use a ratio of shutdowns to meltdowns to see who is doing their job most effectively. Rather than evaluating a reliever based on saves, which only apply to the closer, shutdowns and meltdowns are counting statistics for when a reliever adds 6% to the team’s win probability (shutdown) or costs 6% to the team’s chances of winning (meltdown). Relievers with a higher ratio of shutdowns to meltdowns are most effective; they are coming into the game, doing their job, while having a bad outing detrimental to the team less often. 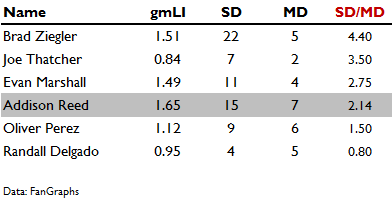 Closers tend to have higher gmLI than other relievers because they are rarely used in non-critical situations. That being said, Addison Reed’s gmLI of 1.65 is not that much higher than Brad Ziegler’s 1.51, or Evan Marshall’s 1.49. And Reed’s combined 22 shutdown and meltdown outcomes is less than Ziegler’s 27. The point being that it would be just as consequential for Ziegler to have a bad season as it would Reed, but if you switch the roles of the two players, people would be satisfied that at least Reed isn’t struggling while being called “the closer”. The numbers show, with Reed’s SD/MD ratio less than half of Ziegler’s, that it is not just blown saves (Reed has four) that have made Reed the less effective reliever compared to Ziegler.

Addison Reed is not having a terrible season. His HR/FB rate takes away from his K/9 and BB/9 rates that are career bests (excluding the 2011 season when he only pitched seven innings). His xFIP, which puts HR/FB% at league average, is respectable at 3.20. After hovering around 68% the past two seasons, he is leaving 75% of runners on base this season. ZIPS projects his ERA to drop to 3.74 for the rest of the year. While Reed has blown two saves in his past four outings, there is reason to believe that he can be an acceptable reliever going forward. The question is simply in what role, and whether taking away his closer role means taking away all high leverage situations, otherwise the point is moot.

Kirk Gibson has more to decide than if he should keep Reed as the closer. He needs to decide if Reed’s overall performance and past history prove that he can be an effective reliever. Then, he can decide if he is better suited as a closer, set-up man, or for mop-up duty. It would seem that despite Reed’s struggles of late, he would at least be worthy of a set-up position. Brad Ziegler has had a strong season as the set-up man. Should he switch roles with Reed?

As we know by understanding leverage index, securing outs in the 8th can be just as crucial as in the 9th. Switching Ziegler and Reed’s roles doesn’t necessarily help the Diamondbacks, if you are looking to hide Reed’s recent struggles. That is why Addison Reed’s closer role is overblown. Who cares if he is the closer or the guy who enters in the 7th or 8th inning. He needs to do his job no matter when he pitches. And we have reason to believe that he can do that.