A Mark Trumbo Platoon or: How I Learned to Stop Worrying and Love Ender’s Game Roundup: Aaron Hill to Third, Jake Lamb to Somewhere

How Much of Vidal Nuno’s Performance is Real, and How Much is Luck?

Since arriving in Arizona, Vidal Nuno has been a pleasant surprise. In nine starts, he has posted a 3.54 ERA, 3.81 FIP, and 7.1 K/9. They’re nothing to write home about, but these statistics are that of a middle of the rotation starter. Upon his arrival, Nuno was pegged as a back-end starter at best. He throws a four-seam fastball somewhere around 90 miles per hour, and has a slew of average off-speed pitches. Again, nothing spectacular here. And his statistics before joining the D-backs were subpar. With the New York Yankees in 2014, Nuno had a 5.42 ERA, 5.17 FIP, and struck out 6.9 per nine innings. This raises the question: is Nuno’s newfound success dumb luck or has he suddenly improved under the D-backs’ tutelage?

The first thing I looked at was Nuno’s release point. Teams often tinker with a new player’s mechanics. Below, I’ve included graphs of Nuno’s vertical and horizontal release points by month. His last start for the Yankees was July 2. 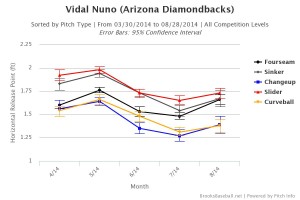 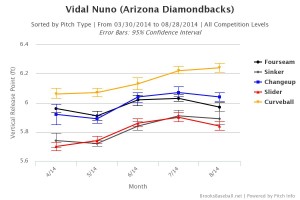 Nuno’s release has been higher and less far from the rubber, meaning he’s throwing a bit more over the top. The changes haven’t led to any added movement on his pitches. Throughout the season, the amount of movement on his pitches has been almost exactly the same. The higher release point may be adding a bit of deception, but that’s hard to measure, and the change in release point is fairly minor anyway. We can chalk this up as a change that may save some stress on Nuno’s elbow, but hasn’t made him a better pitcher.

The increased fastball usage is leading to some interesting results. Nuno is throwing almost 3% more strikes, and batters are swinging at 5.5% more pitches. Specifically, hitters are swinging and missing more often at his off-speed pitches. Nuno has done something noteworthy – he’s managed to throw more strikes while keeping his strikeout rate constant. Generally, throwing more strikes leads to a higher contact rate and more balls in play. Yet Nuno has been able to strike out more batters and walk fewer batters. Despite the increased swing percentage, he is giving up fewer home runs, but a suspiciously low 6.8 HR/FB percentage indicates that he’s been the beneficiary of good luck.

Despite the lucky home run numbers, there’s something to the increased effectiveness of his secondary pitches. It may have to do with their decreased usage. Hitters are expecting fastballs so the other pitches are having a more pronounced effect. It’s difficult to say why it’s happening, but it’s easy to see that it is contributing to better results for the lefty.

There are some signs that Nuno’s ERA is too good to be true. Despite Nuno’s line drive rate jumping from 23% to 28% as a D-back, opposing hitters’ BABIP is .245 in Arizona. It was .301 in New York this season. These two things should be correlated. Moving to the National League could explain part of Nuno’s improvement. He doesn’t have to pitch against designated hitters, and facing the Padres can only help his pitching statistics.

It’s possible Nuno has improved slightly as a result of more efficient pitch selection, but the most likely possibility is that he’s been a victim of good luck. Time will confirm our suspicions – Vidal Nuno just isn’t this good.

3 Responses to How Much of Vidal Nuno’s Performance is Real, and How Much is Luck?