Minor League Update: DSL Check-in A Mark Trumbo Platoon or: How I Learned to Stop Worrying and Love Ender’s Game

With just 126.1 innings under his belt this season, one wouldn’t necessarily think that the D-backs have started to count Chase Anderson‘s innings. But with just 88 innings last year and a career innings high of 104, Anderson could be shut down after just 2 or 3 more starts. Unless, of course, he only gets through six outs like he did on Tuesday.

That still leaves some time to experiment. Two weeks ago, we covered just how dominating Anderson’s changeup has been. But as I mentioned in the post-Saber Seminar roundup on Monday, David Gassko had a very interesting point to make: it hasn’t been productive for projection systems to dwell on pitch selection, because overall, pitchers are best suited pitching “optimally.” That means pitchers should alter their pitch usage enough to close the gap between pitch values. Curveball much more successful than your fastball? Start throwing the curveball more and more often until the fastball starts to get more success of its own.

Of course, if that fastball-curveball pitcher could be more successful by throwing so many curveballs, he probably would have discovered that by now. But the minors are not the majors, and the success of Anderson’s changeup has been extraordinary.

There’s more than one school of thought about optimal pitch sequencing (which is a different idea than overall pitch selection), but preeminent sabermetrician and analyst Mitchell Lichtman has argued in the past for “weighted randomness.” Take all of your pitches, and throw them with the same frequency — but throw your best pitches more. Got four pitches, but one is twice as good as the other three? Well then, make it so that every time you’re in the windup, you have a 20% chance of throwing each of the lesser three pitches, and a 40% chance of throwing the good one.

The PITCHf/x runs-per-100-pitches values for the four pitches are pretty stark.

Ok, so, crazy exercise. What is Chase Anderson’s pitch value overall? I’ll spare you the gory math (if you’ve stayed with me this far, you deserve that much). But with the fourseam having both the lowest pitch value per 100 and the highest frequency, it doesn’t work out that well. If you simply averaged these four pitch values (pretending all four pitches were thrown in equal frequency), you’d get zero (that changeup really changes everything).

Given the negative pitch values for all of Anderson’s other pitches, it could actually still be a good move for Anderson to throw the changeup twice as often if its effectiveness dropped by two-thirds. Trust me, I get that this might not work. But none of us knows that it won’t work. Anderson has trusted his change more and more as the season has worn on, but he’s never let it top 30% of his pitches.

Because I have a high tolerance for numbers today, let’s go a step further. How has Anderson’s pitch selection varied based on the count? From the amazing site Baseball Savant: 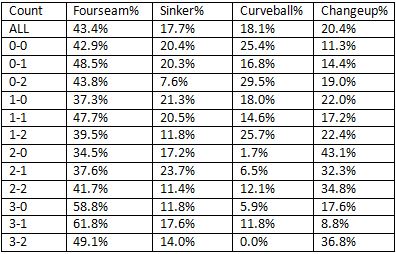 We deal with some sample size issues, especially in the 3-0 count (only 17 pitches). In terms of comparing the percentages for each count to the overall rates, there’s also a selection bias issue: we know that Anderson’s fourseam fares poorly, so in the 0-1 count universe, for example, we know that there’s a lower than 42.9% chance that Anderson just threw the fourseam, because if he had, it was likely to have been hit in play.

Another thing: you’ll notice that the “ALL” row doesn’t line up perfectly with the Brooks Baseball numbers. It does for the change and curve, but in terms of Anderson’s fastballs, Harry Pavlidis (aka Pitch Info) tagged them individually. In other words, the Savant numbers consider a bunch of sinkers to be fourseam fastballs.

There are some weird trends in those numbers. Here are some “rules” that seem to be true from Anderson’s pitch sequencing:

3. No reason to worry about the changeup early. Just 11.3% of the time in 0-0 counts seems crazy, but it’s even crazier than that. When I filtered that sample for innings, using innings 1-3 as a proxy for “first time through the order,” the percentage on 0-0 counts dropped to 5.3%. Anderson appears to believe that the change needs to be set up. But that means hitters can set themselves up to hit a fastball 0-0 in their first PA.

4. Anderson prefers to throw the change in 2 ball counts, when there is margin for error. With the exception of full counts, the highest changeup percentages in the table above come with exactly 2 balls. That seems to be a combination of two forces: wanting to get the change set up as much as possible, and not wanting to take the chance of throwing it for ball 4.

5. If you get Anderson to 3-1, sit on a fastball. He’s thrown them almost 80% of the time. I’m not a professional hitter, but that seems frequent enough to justify guessing. The same kind of thing appears to be true in 3-0 counts, although as noted above there’s a sample size issue there.

6. If you get Anderson to a full count, he’ll make you beat him in the zone. Anderson is more of a horizontal pitcher than a vertical one in general, but if you get him to a 3-2 count, he’s not going to issue you a walk by missing the zone low. The curveball will not be thrown, and the changeup will be up. He’s throwing the changeup almost 37% of the time, which is pretty close to the 40% rate I floated earlier, and I can’t ask for anything higher than that. I really like how Anderson makes you beat him in these circumstances, but his fastballs are just too hittable for this approach, in my humble opinion.

Anderson’s game is about the changeup, about command, and about keeping hitters guessing. But right now he’s not actually throwing the changeup that much, and he’s not keeping hitters guessing as much as he could (those six rules, above, improve your odds of guessing correctly by 15% or so overall, which is a huge difference — and I’m pretty sure most hitters could keep all six in their heads). I’d really like to see Chase use his final starts of the season to find out how effective the change would be if thrown twice as often, and to try to break some of these patterns that may make him more predictable.