Montero and Miley: A Match Made in Pitch Framing Heaven D-backs Starting Pitchers Too Homer Happy

Just over one year ago, a struggling Tony Sipp left the D-backs with no real left-handed option in the bullpen, prompting a trade for Joe Thatcher. Now, even with Thatcher gone, the D-backs appear to have several. It’s far from a sure thing that the D-backs will carry two lefties in their 2015 Opening Day bullpen, and unless the D-backs get extreme in cutting payroll, Oliver Perez will claim one of those spots. But Matt Reynolds, Andrew Chafin, and now Eury De la Rosa may all make strong bids to join the bullpen, as well.

There isn’t a whole lot to say about Reynolds because we don’t know much right now, five days short of his one-year Tommy John anniversary. He did throw 25 pitches in a bullpen session last Friday, and as a reliever that probably would have put him on target to return to pitching in MLB games in early November if the season actually went that long. He seems almost as likely to be healthy and ready to go in February as any other D-backs reliever, and he has a shot at being the best reliever in the D-backs pen next season if he makes it. Reynolds was nothing special with Colorado in 2011 and 2012, although his home/road splits were very substantial. His half season with Arizona was eye-popping: a 1.98 ERA backed up by an outstanding 2.97 FIP. Reynolds is less of a “stuff” pitcher, and it seemed to be superior contact management and command that made him successful; unfortunately, command can be one of the last things to come back after Tommy John.

Andrew Chafin could also push his way into top bullpen consideration. It’s clear from his recent performance that Chafin’s ceiling could extend as high as #4 or even #3 starter territory, but that still seems more unlikely than likely. A bulldog reliever who still has options and is making the major league minimum still has a ton of value. It may be that there’s room for Chafin in the rotation at the outset of the season, with the team waiting for Archie Bradley to pass a service time threshold in mid April and for Patrick Corbin to return after Tommy John, possibly in June. Nonetheless, a new front office might choose to endorse a new model for building a bullpen, and if that were the case, Chafin could be its poster child.

With Reynolds returning and Chafin a possibility, I honestly did not think a month or two ago that Eury De la Rosa would work his way into the conversation. His (limited) 2013 performance with the team was horrendous (it’s hard to be worth -0.4 WAR in less than 15 innings). I try to only be bombastic on Twitter when it’s clearly called for, but after De la Rosa let up a home run in his fourth appearance this season, I tweeted this:

Not saying this because of the HR: I have zero interest in seeing if Eury De La Rosa can improve at the ML level. Try someone else.

Oh, was I wrong. De la Rosa had a less than amazing July (4.89 FIP), but he followed that up with an excellent August (2.83 FIP) and he’s been lights out thus far in September (2.09 FIP). That one home run was the only one De la Rosa has let up this year. Basically, I shouldn’t get to eat anything other than humble pie for the rest of the season.

I think I was probably prejudiced against De la Rosa not just because of 2013 experiences, but also because he’s been a reliever at every rung of the minor league ladder. Not just every rung he’s been on; he literally has pitched at every rung of the minor league ladder, in seven different minor leagues. His last start came in the 2009 season for Missoula (which still used him mainly in relief). A closer look shows that the only year in which he’s really struggled as a professional is 2013, when he got shellacked for both the D-backs (6.32 FIP) and the Triple-A Aces (4.92 FIP).

The secret to De la Rosa’s success might lie in his usage, especially in the majors. With the D-backs last season, he pitched an average of .77 innings per appearance. This year, that’s ballooned to 1.53 innings per start, almost exactly double the length of his average appearance the year before. Maybe De la Rosa is not a matchups guy.

Indeed, the left-handed De la Rosa has been far more effective against right-handed hitters this year than against lefties. That plays out in batting average against (lefties hitting .294, righties .213), but lefties have also had a better slugging percentage while maintaining a very similar walk rate. In talking this over with Jeff yesterday, he opined that this was a sample size vaguery, and that’s almost definitely true.* With the Aces earlier this year, he did do much better against lefties (as expected), who hit him to the tune of a .150 batting average while righties hit .276.

So: who the hell is Eury De la Rosa?

Not a fastball pitcher, apparently. Last season, De la Rosa favored a four-seam fastball over a sinker, but even then, he threw the four-seam just 21.85% of the time. He threw his sinker just under 13% of the time — but that was the least frequently he threw any of his five pitches. From Brooks Baseball:

It appears that De la Rosa tries to succeed by keeping batters off balance, and while the pitch values for his curveball and changeup have not been good, his sinker has been decent although it was not good last year, and his slider has been excellent.

Remember how De la Rosa did well not so great in July, but very good in August and spectacular so far in September? Check this out: 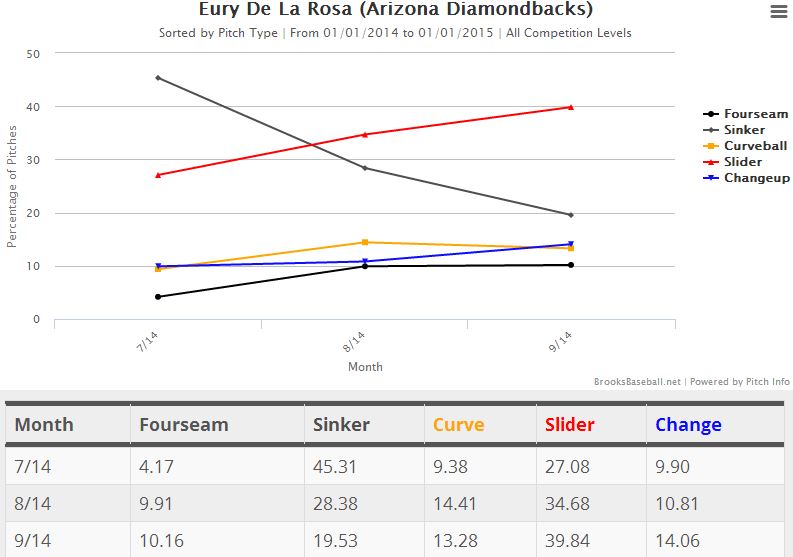 Throwing fastballs more than 50% of the time wasn’t working, and he’s steadily decreased the frequency of hard stuff as this season has worn on. So far in September, he’s thrown fastballs less than 30% of the time, which is pretty obscene as compared to other major league pitchers. Meanwhile, it’s been the slider that has mostly picked up the slack.

Put more succinctly: in terms of pitch selection, Eury De la Rosa has made exactly the kind of adjustments that you would want a pitcher to make. And as a result, what exactly should your plan be if you came to the plate against him? Waiting on a fastball won’t work like it might with most pitchers, because a good chunk of the time it’s going to sink, and De la Rosa throws a change with no obvious break to it about 13 mph slower, and about half as often as a fastball. The only pitch you can be comfortable betting on seeing is the slider, and that pitch has been almost impossible to hit, with a PITCHf/x pitch value per 100 (3.33) almost as insane as Chase Anderson‘s changeup (which is to say, uncommonly good).

De la Rosa has the luxury of throwing such a high proportion of sliders because of his status as a reliever. While few major league starters would throw 39 sliders on a particular day, De la Rosa can throw four or five and keep his percentage up without having his elbow explode.

What’s more, as a reliever, De la Rosa has little incentive to save pitches for subsequent plate appearances. In fact, this season De la Rosa has started at bats with sliders 43% of the time. Talk about pitching backwards; and while Chase Anderson might see starting at bats with changeups as some kind of venial sin, De la Rosa has mixed in some changeups in 0-0 counts, too (6.5%). That’s still the count in which you could make a reasonable bet on a sinker, but when you combine all counts other than 0-0 counts, he’s thrown his five pitches almost equally as often (still some preference for the slider).

That’s almost perfectly in line with the school of thought that pitch frequency and sequencing should follow a kind of “weighted randomness” protocol. Some pitches better than others? Cool. But once you determine you should throw your changeup half as often as the fastball, etc., pitch selection should be as random as possible. Based on De la Rosa’s pitch frequency in September (which we’ll presume is particularly effective), it’d be a little like having a twenty-sided die. Roll a 1 through 8? Slider time. 8 and 9? Four-seam. The sinker would be for when the numbers hit 10-14, the curve 15-17, and the changeup 18-20. Keep it as random as possible, because these are all professional hitters, and if you think you can out-think them, you’re going to be wrong a lot of the time.

Keep doing what you’re doing, Eury De la Rosa. If this junkball approach continues to work, you’ll have a permanent place in the big leagues as early as April 2015.

*Remember De la Rosa’s reverse platoon split? This doesn’t explain it or show it to be sustainable or not, but he does pitch guys a bit differently righty/lefty. Against lefties, De la Rosa has thrown just ONE changeup this season (of 227; compare to 60 of 316 pitches to right-handed batters). He’s also thrown his curveball much more to lefties (20.3% of the time) than to righties (6.6%). The frequency of his other three pitches is pretty static, so it’s really just replacing changeups with curveballs when facing lefties. If you can credibly make the argument that his changeup is better than his curveball (supported by pitch values, although platoon splits are baked into those numbers), you’d have an argument that maybe some portion of De la Rosa’s reverse platoon split is likely to be sustained.