Montero and Miley: A Match Made in Pitch Framing Heaven

On Monday, the Diamondbacks beat the Giants 6-2 at Chase Field. The game was rare not just in that the D-backs won, but that it featured the top two pitch framing pitcher-catcher batteries in MLB this season. Using at least 1,000 “pitch framing chances” as defined by Baseball Prospectus, the tandem of Ryan Vogelsong and Buster Posey is tops in baseball not just in total number of “extra strikes” (56.6) but also in extra strikes per 100 framing chances (3.64).

Not far behind, however, is the combination of Miguel Montero and Wade Miley. Racking up 1244 framing chances, the pair have been good for 45.2 in “extra strikes,” or strikes over and above the expected number of strikes, which takes into account not just the rulebook strike zone, but the strike zone actually observed this season by the RPM system created by Dan Brooks and Harry Pavlidis. Compared to framing chances to make a rate statistic, the Montero-Miley battery has been good for 3.63 extra strikes per 100 framing chances.

What does that mean, exactly? Framing chances don’t come about at any kind of regular rate for either pitchers or catchers; to qualify, the pitch needs to come in at or just beyond the edge of the observed strike zone, and it needs to not be swung at. The saber community has recently looked squarely at the issue of how to distribute credit between pitchers and catchers for getting these opportunities and then exploiting them, but there seems to be one issue on which everyone agrees: a pitcher with superior command could capitalize on being partnered with a catcher good at framing by pitching more regularly at the boundaries of the strike zone. In short, there is definitely reason to believe that for the very best batteries in terms of framing, both pitcher and catcher deserve at least some of the credit.

Enter Montero. According to the Baseball Prospectus statistics, Montero has already been good for 133.4 extra strikes (partial credit is given for calls, depending on how frequently they’ve been called strikes across the sport). That makes for 16.5 “Framing Runs” if you look at it from a “what was the count when this happened” perspective, and 19.8 “Framing Runs” if calculated by call. Both marks come in at 8th among 97 catchers, and considering some of the other guys atop the list (Jose Molina, Hank Conger, Rene Rivera) are part-time, glove-first specialists, it seems that Montero is an outstanding catcher. Regardless of which version of “Framing Runs” you use, there’s every reason to think that Montero has been worth more than the 1.4 wins indicated by his WAR.

But we can’t necessarily bump Montero’s value up to 3 wins, because framing almost definitely depends in part on the pitchers caught. [Note: this last sentence is incorrect. The RPM system at BP already accounts for pitchers and umpires, as Harry Pavlidis has noted below.] When I shortened the list of over 1,800 pitcher-catcher batteries from 2014 to a list of 238 batteries with at least 400 “framing chances,” there were still eleven Montero batteries in the list. And while matches with Chase Anderson and Brandon McCarthy haven’t turned out so well (negative 17.1 “extra strikes” combined), overall, the Montero batteries have done really well.

Coincidence or not, some of the best Montero batteries have featured pitchers who have unusual pitch paths to the plate. Number 5 is Josh Collmenter, who throws downhill. Number 4 is Trevor Cahill, whose sinker often does crazy things as it’s crossing the plate. And number 3 is Brad Ziegler, whose submarining ways probably need no introduction.

Next on the list: control artist Bronson Arroyo. That makes sense, and overall in 2013, Arroyo’s batteries were good for 8.9 extra strikes and 1599 framing chances, 0.56 in the per-100 rate stat. That’s fairly good (and Arroyo was dragged down partly by the poor-framing Devin Mesoraco), but not nearly as good as what Arroyo and Montero seemed to be capable of.

With Wade Miley, however, Montero has done even better, and in a full season. What’s curious is that Miley did poorly last year with framing, and particularly poorly with Montero: -11 extra strikes compared to 1,172 chances (-0.94 per 100). But Montero’s cranky back and overall mediocre framing statistics from 2013 could have something to do with that. In 2012, the two combined for results well above average: 24.2 extra strikes, 1,321 framing chances, and 1.83 per 100.

Like Vogelsong, Miley throws five pitches, an unusual thing for a pitcher. Considering Arroyo also did pretty well, I do wonder if having a varied array of pitches helps steal extra calls; maybe when an umpire is surprised to find that the catcher knew exactly where a pitch was going, his instinct is that it must have been a “good” pitch.

At any rate, it seems to work. Pinpointing exactly which strikes are “extra strikes” are an inexact science. For the BP stats, credit for 0.6 “extra strikes” is given if a strike is called at a location where only 40% of pitches are called strikes, and so on; it’s a continuum, and because it’s compared to the actual strike zone instead of the rulebook version, some of the borderline advantages aren’t terribly obvious.

But there were definitely at least two pitches solidly outside the PITCHf/x zone on Monday that Montero and Miley had called a strike. Check out where Montero set up with a 1-1 count in the third inning against Juan Perez: 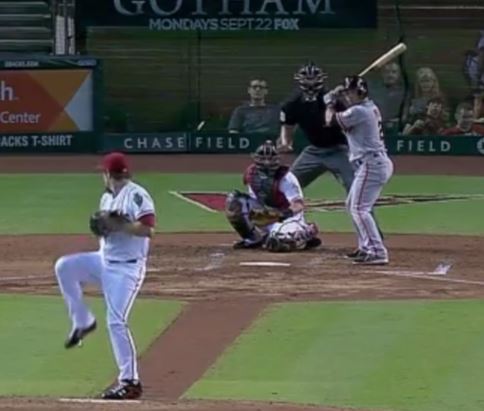 Ask and ye shall receive. Or something like that…

Montero did not let that 84 mph changeup stay under the strike zone for long, and sure enough, home plate umpire Tom Woodring called it a strike.

Think that’s not such a huge deal? That strike made the count 1-2 instead of 2-1. Last season, hitters across MLB hit .166 in 1-2 counts, according to At-Bat Stats. In 2-1 counts, hitters’ batting average ballooned to .351. This stuff matters.

They took advantage of Perez again in the fifth inning:

And it’s not just below the zone. Sure, Miley likes to keep it down, and he likes to bury it off the plate down and to his glove side. But ESPN Stats & Info has tracked 122 called strikes for Miley this season that were considered both outside of the strike zone. The only place he doesn’t put them is high: 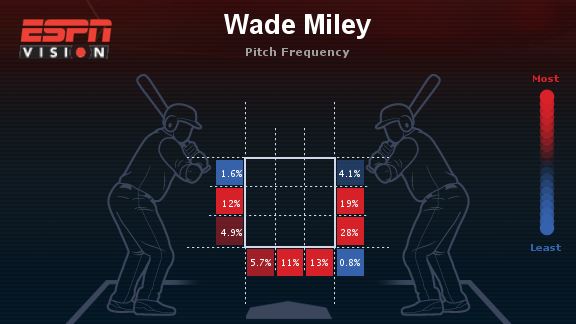 Miley is scheduled to make two more starts this season, and now that I’m attuned to just how big a strength this is for Miley and Montero, I’ll be watching those starts intently for calls off the plate. But for now, I’ll leave you with this expertly-framed Pablo Sandoval moment of Zen:

3 Responses to Montero and Miley: A Match Made in Pitch Framing Heaven