Roundup: Bryan Minniti Hired as AGM; Inside the ‘Zona Gets its Saber-Sherpa Wish? Bradley and Drury Battling, Relievers Shining in the Arizona Fall League

This is the Offseason to Extend A.J. Pollock, if Ever

The Diamondbacks have three young stars. No one misses the first one as Paul Goldschmidt is a top-ten talent in all of baseball. His 2013 co-All Star, Patrick Corbin, is the second one, although he missed all of 2014 after having Tommy John in the spring and the D-backs paid the price. The third star is less obvious to those outside of Arizona and the NL West, but don’t sleep on A.J. Pollock. In fact, maybe now’s the time to extend the young center fielder. Let’s evaluate his game and you’ll see what I mean.

The easiest part of Pollock’s game to define is what he does in the field. By both DRS and UZR, he’s considered an asset in center and the good ‘ol eye test backs up this assertion. We’ve seen a ton of fine plays from him and while his arm is only average, he covers a ton of ground and wins points for his range. By UZR/150, which is rate-based and normalizes ultimate zone rating so one can compare players who’ve played different numbers of innings (which is important here considering Pollock’s injuries), A.J. ranks 8th in the majors for all center fielders with at least 500 innings in center, one spot ahead of October darling Lorenzo Cain. He’s that good.

For all of the ground that Pollock covers in center, one might think he’d generate more value on the bases. Instead, he’s merely above average, not elite. Instinctually, he does a nice job on the base paths but doesn’t have the pure speed to be one of the game’s great base-stealers. He’s a threat on the bases, no doubt, and opposing pitchers can’t lose track of him, but he’s not in the top tier of base runners in the game. Still, he’s plenty above average and generates value on the bases nonetheless, even if he’s not as amazing in this category as he is defensively in center field.

Things get kinda interesting here, and I think it we have to slow down and look more deeply at A.J.’s offensive game. Let’s first take a look at his offensive output over the last three seasons, in which he logged 81, 443 and 287 at-bats from 2012 through 2014. 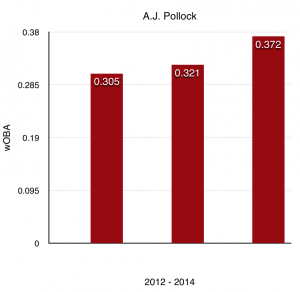 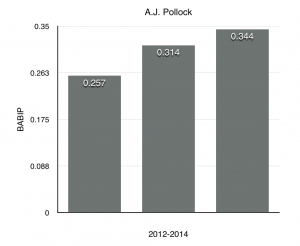 It’s hard to evaluate a player whose success is tied up in his BABIP, and apparently, the projection systems have had a hard time making sense of Pollock, too. Take a look at what Steamer has projected and what Pollock has done over the last few years. 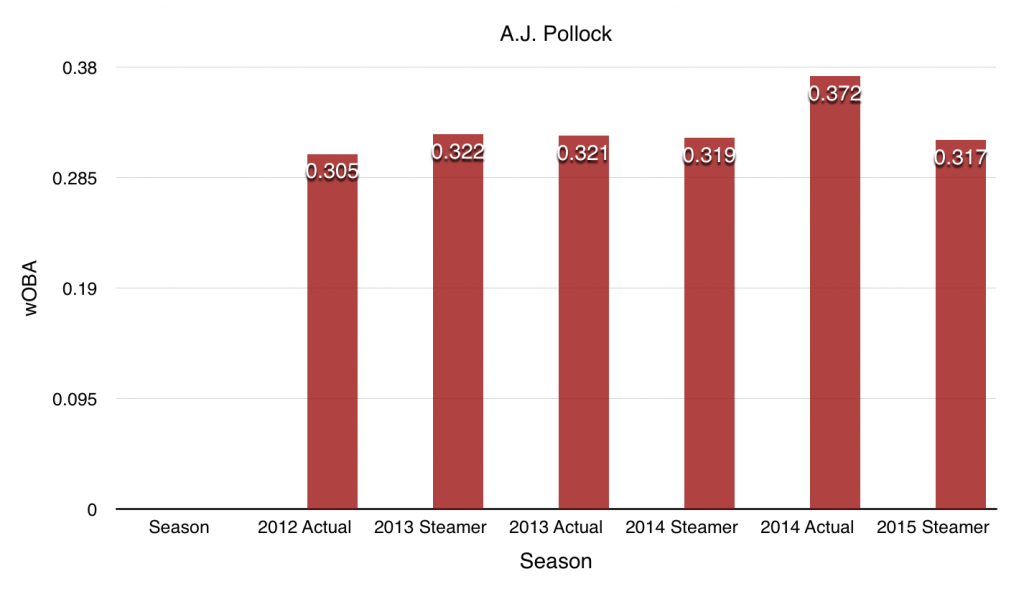 So let’s get this right. Pollock struggled a bit in his debut. Steamer projected better performance in 2013 and he did perform just as it predicted. Then Steamer projected a slight decrease (for whatever reason) and Pollock crushed it when he was on the field (again, thanks in part to his BABIP). So did Steamer buy into Pollock’s offensive uptick? Apparently not, discounting Pollock’s 2014 performance as kinda flukey. And they have a point, I mean, as his career-best BABIP won’t be resurfacing in 2015, but they also don’t seem to be buying his increase in power or his slight decrease in strikeouts. I’m a proponent of projection systems as they do a good job with the big picture (like all of MLB, cumulatively) but can struggle with individual cases. I think this is one of those; Pollock is better than what Steamer sees in 2015.

But extending Pollock is only partially of about what he’s done in the past. Those performances establish a baseline of what we may expect going forward, but they don’t account for things like age, health and general improvement in player performance. Pollock will be 27 next season, the beginning of his traditional prime, which should hold steady for two or three seasons before he starts to enter his decline phase. He has one more year left at the league minimum (2015), then enters the arbitration process (2016-2018) and would become a free agent finally at the ripe age of 30. If Arizona were to extend him in an attempt to extend it’s control over Pollock, they’d have to make their offer for at least five years, and given that a five-year extension would cover his age 31 season, I think it makes sense that they don’t got any further than that. In fact, let’s just use a five-year extension as our baseline.

So how would we project Pollock over the next five years? His defense should hold relatively steady, provided he stays mostly healthy and doesn’t suffer any injuries that limit his range in a severe way. In all likelihood, he remains a very good center fielder for two or three more seasons, then just becomes good. On the bases, we probably see something similar, where he remains a good base runner for two or three more seasons before slowing down a bit an becoming just slightly above average. Both in the field and on the bases, A.J. is a valuable asset for the next five years provided he doesn’t suffer any drastic, debilitating injuries.

Offense is harder to project as there are plenty of variables at play, and while no one has a crystal ball (at least not a functional one), there are some generalities we can assume. First, as players age, they tend to get a better grasp on the strike zone until their skill set really starts to erode in their mid to late 30’s. For Pollock, that might look like a strike out rate that holds steady or drops a little and hopefully more walks. Players also tend to hit for more power as they age and I think, given his reputation and build, it’s not outlandish to think that A.J. will hit more home runs, perhaps as many as 15 or 18 in his peak season. As he ages, he might lose a step and become a slightly slower runner, hurting his BABIP and ability to hit for average, eventually offsetting the increase in power down the road.

But while we can talk about these skills changing over time, a five-year extension should keep the Diamondbacks relatively safe from a naturally diminished skill set. Sure, Pollock’s attributes will fade just like every other player’s, but they should hold up for another five seasons for the most part. If that’s the case, and we account for some growth as he gets a third full season under his belt, we’re looking at a guy who should check in anywhere between 3 and 4.5 wins per season above replacement level. That’s a hell of an asset to have at a premium defensive position. If we just took the average of that range and multiplied by five, which is lazy but all we really have to go on without our own projection system, we can see Pollock worth nearly 19 wins in the next five years. With wins projected to go for about $7.25 million dollars a piece over that span, that’s roughly $140 million in production.

The figure above is presumably what Pollock could fetch as a free agent, though, and not what he’d get in an extension with Arizona. He’s slated to make $500,000 in 2014, then could see somewhere in the neighborhood of $4-5 million in is first pass through arbitration, depending on health and performance. If he were to hold somewhat steady and earn two more arbitration raises in 2017 and 2018, he could be owed a total of $22.5 million between now and the time he ends arbitration.

Of course, that assumes a pretty linear level of production from Pollock, and as we know, baseball players can elicit a myriad of outcomes. The model above is what I would consider the most realistic scenario (about 14 or 15 WAR between now and 2018). But there’s a best-case scenario out there, too, and that’s probably somewhere in the neighborhood of 20-24 WAR, where Pollock somehow plays like he did this season for the next four without missing much time. If that’s the case, and we even account for his BABIP, his best-case scenario is pretty darn fantastic, and the best part is, we’ve seen him perform at that level in spurts in the past. We can’t ignore a worst-case scenario, though, and that probably leaves Pollock in the 8-10 WAR range, where he slips at the plate and is oft-injured.

So the Diamondbacks, in an extension, will look to protect themselves from the worst-case scenario by not overpaying, while hoping for the best-case scenario in terms of production, or at least something close to it. Also, they have to figure the deal based on the alternative, which in this case is going year-to-year with Pollock. If they do that, as we’ve established, they will probably owe him $22.5-ish million before he becomes a free agent. To grab another year of control, they’d have to be willing to guarantee more cash, and perhaps, an option year to make Pollock more money. At the current salary projection through 2018, Pollock would earn about $5.5 million per season. By upping that figure, the Diamondbacks might be able to buy themselves some extra control over one of the best young outfielders in the game.

So here’s my recommendation: sign Pollock to a 5-year, $33 million extension with a $14 million team option for 2020 with a $2 million buy-out. That’s a total of $35 million for five years, or $7 million per season, up from what he’d earn through arbitration (good for Pollock) and keeps him with the team for one extra season if the D-backs exercise the option (good for Arizona). The dollar figure is low enough for the Diamondbacks that they can afford some injury time because, let’s face it, Pollock has been injured a bit through his pro career. And, it provides plenty of safety if he reverts back to just a league average bat, instead paying for his defense and base running. Should he approach anything like his best-case scenario, then, well, Pollock’s deal might just rival Goldschmidt’s as one of the best in the game.

Arizona doesn’t have a lot of cash. They can’t afford the top-tier free agents now and they’re really going to have a tough time obtaining them in the future. Extending young stars has paid huge dividends for teams in similar financial situations and the Diamondbacks should look to learn from them to keep their stars in Arizona and affordable. Pollock is a nice addition to the team’s core, and if they can get him at an affordable number, they’ll be able to continue pursuing higher-priced players.

And frankly, now’s the time if the Diamondbacks want a sweet deal. Should Pollock play a full 2015 at the rate we think he will, his value will escalate and his incentive to sign an extension, any extension, will decrease.  This is the offseason for the Diamondbacks to get the best bang for their buck when it comes to Pollock, and if they don’t explore an extension now, they may just be best off to play it year to year, showing they don’t have a good read on just who A.J. Pollock really is going forward. Let’s see how comfortable they feel with the young outfielder, as an extension offer will be a good indicator.

9 Responses to This is the Offseason to Extend A.J. Pollock, if Ever