Projecting Patrick Corbin: As Good, Post Surgery? The Case for Ender Inciarte as Rookie of the Year

Tuffy Gosewisch in Context: The Best Backup Catcher Option for 2015

Only 9 catchers qualified for the batting title this year. Miguel Montero was one of them, but notwithstanding the fact that he actually led the D-backs in games played (136) and plate appearances (560) in 2014, the number of plate appearances tallied by the average backup catcher is not trivial. For a contending club, a backup catcher can make a real difference. And let’s face it: with Montero turning 32 during the 2015 season, the D-backs backup catcher may not be a backup for the entire season. At the very least, the team might do well to keep Montero more fresh with more and more rest days as he begins earning his bigger paychecks.

The competency of next season’s backup catcher could determine whether Montero continues to play so much; he played 116 games in 2013 despite missing a month to the DL, after totaling at least 140 games in the previous two seasons. Is Tuffy Gosewisch the man for the job?

63 players who played mostly at catcher had at least 100 plate appearances in 2014. Some, like the Tampa Bay and San Diego catchers, were part of less traditional time shares; to eliminate them, let’s draw the line at 200 PA when coming up with a set of “backup catchers.” Although this is a quick-and-dirty way to look at backup catchers, I’m going to remove Matt Wieters, who is not a backup by any stretch of the imagination. That leaves us with just 22 catchers, and from that maybe we can form a baseline to which we can compare Gosewisch.

Stacking up the backups

The results are not pretty. In 3486 PA, about as many as would be tallied by 6 starting position players, the group totals 4.8 WAR. Of the 22, just two surpassed 1 WAR: Michael McKenry of the Rockies (1.7) and Francisco Cervelli of the Yankees (1.3). Seven had negative totals. Gosewisch ranks thirteenth in the group, looking not at all shabby with a 0.1 WAR.

While WAR takes into account essentially everything (that is, after all, the idea), it doesn’t work as well for catchers as it does for players of other positions. A lot of very compelling evidence shows that some of the best pitch framers in baseball can add more than two wins’ worth of runs saved as compared to the average catcher, and the wonderful statistics at Baseball Prospectus already control for the effect that, say, pitchers with superior control play in making a catcher successful as a pitch framer.

To get an idea, then, of how Gosewisch fits into this picture, let’s combine WAR from FanGraphs with Receiving Runs from Baseball Prospectus. Again, quick and dirty. To convert Receiving Runs into wins, I’m dividing them by nine, which is roughly how runs convert to wins these days. 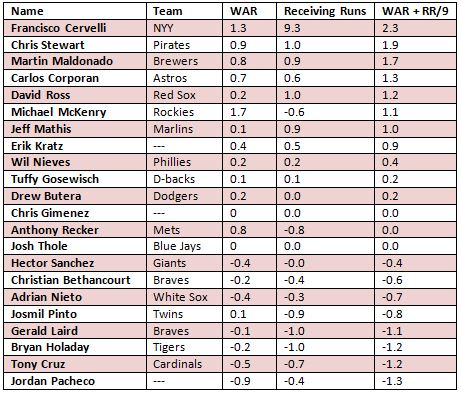 From this list, is looks that when framing is included, there were relatively few backup catchers in baseball who were positive assets for their teams. Francisco Cervelli, Chris Stewart and Martin Maldonado led the way, but after the top eight, there’s a real dropoff. Old friend Wil Nieves was moderately helpful to his new team, and then there are five guys who weren’t positives or negatives. Then, a bunch of guys who hurt their clubs with some combination of skills.

But as noted above, my bottom plate appearance cutoff was 100, and my top was 200. A difference in plate appearances isn’t something that can make a negative number positive or the other way around, but it might be unfair to compare Carlos Corporan‘s 190 PA to Gosewisch’s 132. So let’s try turning all of this into a rate stat, playing the very small samples for each of these players into numbers that might translate better into starters: 140 games played. 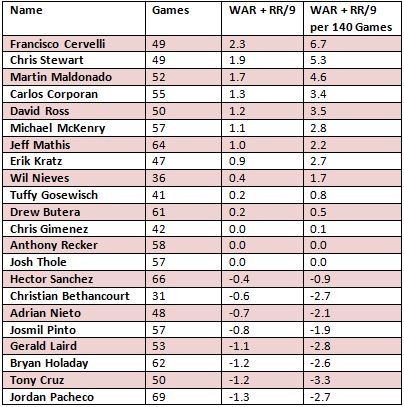 No big changes. It’s interesting that Gosewisch just about matched the contribution of Wil Nieves; put a win in the Kevin Towers column for not wasting money on Nieves in 2014 despite how terrible Gosewisch looked in his call-up in August 2013.

And both are solidly in the middle as backup catchers go. If your backup catcher isn’t going to be a strongly positive asset, like a Cervelli or a Stewart, then you want to 1) avoid hurting yourself with a bad backup, and 2) fill the spot on the cheap. Gosewisch accomplished both of those things for the D-backs in 2014.

There’s no reason to think that Gosewisch can’t accomplish both of those things in 2015, as well — and even 2016. It may be that once he becomes eligible for arbitration, he may no longer be worth it for the club. But he’s probably the smart play for 2015.

If Gosewisch is really a 1-WAR type (this exercise doesn’t really tell us that), then that’s pretty much spot on. You wouldn’t want to “waste” a more valuable player on such a small sliver of playing time, but you also want to avoid situations in which your backup is giving away a full win based on inferior play. A few teams did the latter in 2014, but the D-backs weren’t one of them.

Ideally, backup players have one or more varieties of “special sauce.” That may loom larger when it comes to fourth outfielders, but it’s still relevant to backup catchers. Do they handle one particularly hard-to-catch pitcher well, like backup Doug Mirabelli did with respect to knuckleballer Tim Wakefield? Are they so good defensively that you might look to slip them into a game right after a starter has had a plate appearance? Do they have a platoon split or offer power to an extent that they might be a particularly successful pinch hitter at particular times?

Those types of “special sauce” could make catchers of similar overall quality more or less effective as a backup. For instance, in that top table, Chris Gimenez and Anthony Recker both end up with no value when WAR and framing is combined; but I would argue that Recker is the more valuable of the two as a backup, because there could be a way to limit his time behind the plate and make particularly good use of his decent hitting and/or home run power (he had a .172 Isolated Slugging, which is quite powerful).

Gosewisch has none of those types of special sauce, as far as I can tell. Last year, his power was terrible (1 HR, .085 ISO). Tuffy’s overall hitting contribution (47 wRC+) rated worse than every other catcher in the above list. That’s bad, friends.

But a fairly positive skill in defense in general and pitch framing in particular more or less zeroed out the poor offense. That’s good, so long as he’s cheap.

The better news: despite being just 31 years young, it’s possible that Gosewisch could improve, at least marginally. Or, at least, that’s more likely than seeing his production drop off, what with the framing skill in particular stabilizing pretty quickly.

At the plate, Gosewisch has had some success in the past in the minors. Looking at each year at each level, the thing that seems to make the difference between his poor stops and his good ones is walk rate. Gosewisch once had a 13.2% walk rate in Double-A in the Phillies organization, which also happened to be his best offensive year. His walk rate dropped significantly at the same level the next year (2011), to 4.9%. And while picking up playing time in Triple-A with three different organizations over the next two seasons, he bounced around between 3.9%, 6.3% and 9.3%.

Walks have been a very big problem for Gosewisch in the majors, however. In 47 PA in 2013, he walked zero times. In 2014, he managed a 2.3% walk rate… meaning he walked twice in his 132 PA. Not good, but possibly something that could improve for Tuffy with time seeing more major league at bats. Something to work on, especially since he was never a power hitter.

But it could be Gosewisch’s skill in pitch framing that could get the biggest boost, if the D-backs make an effort. As Ben Lindbergh detailed at Baseball Prospectus over a year ago, J.P. Arencibia went from fairly bad to very good at pitch framing after working with Blue Jays roving pitching instructor Sal Fasano during the 2013 season. It’s possible to make strides like that. And if Gosewisch went from slightly above average in that department to well above average, he’d become a very real asset.

Whether Gosewisch is the best backup option in 2015, then, is largely a question of alternatives. Arencibia is himself a free agent again, but he hasn’t hit over the Mendoza line since 2012, and his overall hitting contribution this year (64 wRC+) was not much better than that of Gosewisch. If he’s the best on offer and he would cost more than $2M to sign, the juice is probably not worth the squeeze.

A better play might be to hand the job to Bobby Wilson, who recently cleared waivers and was sent down to Triple-A Reno to take him off the 40-man roster. Wilson has a history of Gosewisch-esque offense in the majors, but his framing skills are solidly above average for his career according to BP. That might make him a better bet than Gosewisch overall, except for the likelihood that the team can hold onto Gosewisch for longer.

Tuffy Gosewisch is not one of the Diamondbacks’ best players, but he is capable of making a positive contribution, of getting better, and of doing all of that on the cheap. We saw last week that the D-backs’ payroll constraints for next season are very significant. Spending $3M for a Wil Nieves type when there’s only at most $15M to spend and Gosewisch can work for the MLB minimum would not be the smart move.

3 Responses to Tuffy Gosewisch in Context: The Best Backup Catcher Option for 2015