Patrick Corbin had an odd 2013; he was brilliant, and then very good, and then very bad. There’s a wide range of outcomes for what he may bring to the D-backs in 2015, and armed with pre-season projections and a ton of baseball history, there are reasons for optimism.

Corbin ended May of 2013 with ten starts in the bag, each of which was a “quality start” (6+ innings, 3 or fewer earned runs). The last in May was the worst to that point, barely qualifying as “quality” with exactly six innings and three earned runs (four runs total). He had given up two earned runs or fewer in each of his previous starts, and at the end of May, he had a sterling 1.71 ERA.

In June and July, he had eleven starts, to the tune of a 2.72 ERA. Still excellent. But entering August with a shiny 2.24 ERA, the wheels started to come off. He had three starts that weren’t bad but weren’t good compared to his previous work, then his second complete game of the season, a 2-ER, 10-strikeout gem.

If you recall, that was when the Diamondbacks won a horrendous 18-inning affair in Philadelphia, in which they used nine pitchers and Trevor Cahill earned the win with four innings of scoreless relief. Not only had the D-backs used every reliever, but they’d dipped into the rotation kitty, as well. Four relievers had also thrown on Friday, and were gassed. After the game, Kirk Gibson‘s wife texted him, the end of the message being: “Thank God for Corbin.”

Whether it was the pressure or the fact that at over 172 innings, he was about to pass his previous high mark for innings pitched, Corbin had the worst start of his career, a 5.1 inning performance in which he let up nine runs, eight of them earned. Corbin took a drubbing in the first, ran into trouble in the fourth, and was eventually removed in the sixth — but only after allowing four men to reach on base (one was on an error, but the error was committed by him). But for the previous day’s marathon, he might have been removed more quickly; we’ll never know.

What we do know: he was terrible from then on. Excluding that terrible game, Corbin still had a Bolsinger-esque 7.04 ERA in his final six starts. All told, Corbin had a 6.04 ERA in August/September, after that incredible 1.71 ERA mark in the first third of the season and the 2.72 ERA of the second. That’s not a great trend line.

But it seems unlikely that when he returns, Corbin will be the pitcher that let up 32 ER in his final 36 innings. Steamer isn’t so sure of how many innings Corbin will pitch, but projects that when he does pitch, it will be to something like a 3.50 ERA. That’s a touch worse than his overall 2013 ERA of 3.41.

Corbin never really got going in spring training this year, and I think it’s fair to wonder if there was something wrong with him physically at the end of the 2013 season. This is, after all, the same team that this year diagnosed Chris Owings‘s shoulder injury as just a bone bruise (which was also true), missing the labrum tear that last week put him on the surgeon’s table. With that as a backdrop, what can we expect of Corbin in 2015?

Over a month ago, Kirk Gibson indicated that Corbin might not see MLB action until June of the 2015 season. He may partly have been managing expectations, but we can expect the D-backs to be careful in managing Corbin’s rehab, wanting to avoid a fiasco like the one that befell Daniel Hudson.

That’s probably a good thing for Corbin. As noted above, Corbin hit a wall just as he was rounding the bend on his previous season’s innings total (186.1 at three levels), and while the “Verducci Rule” holds that 30-inning increments seem like a good idea, the facts on the ground probably dictated that he shouldn’t have been counted on for 208.1.

Ramping up with a rehab assignment in late May or early June would mean that Corbin would probably end up in the 120-140 inning range before getting shut down at the end of the season. I’m no doctor, but that sounds like a pretty healthy way to come back.

The problem, then, comes in 2016. If he throws 130 innings in 2015, do you let him get back up to the 200 inning threshold in 2016? I have been unable to find an example of a pitcher who, coming back from Tommy John, had his innings capped in his second season back if he had previously topped the 200 inning mark. Corbin won’t be one of just five starting pitchers in 2015, and he almost definitely won’t be just one of five in 2016, either. The most important thing in Corbin’s recovery is to worry about 2015, but the 2016 issue will loom in long-term planning, especially this time next season — even if everything goes according to plan.

Corbin’s slider could be the key

Throwing it 22.8% of the time in 2013, Corbin’s slider was worth 1.43 runs more than the average slider in PITCHf/x Pitch Values/100, and considering that other pitchers only throw sliders if they think they’re an asset (unlike with four-seam fastballs and changeups), that’s really saying something. Here’s how his pitches stacked up in 2013, from FanGraphs (pitch values*) and Brooks Baseball (everything else):

*Note: Brooks Baseball, through Pitch Info, classifies pitches differently than PITCHf/x. That may only affect the fastball numbers, but combining them still gives us a more complete picture in my opinion.

Corbin hasn’t thrown his slider the exact same percent of the time in all of his MLB months. To get at just how much his slider has affected his overall performance, I looked at his FIP for every month in which he pitched at least 20 innings in the majors, and compared that to his slider usage for each of those months. 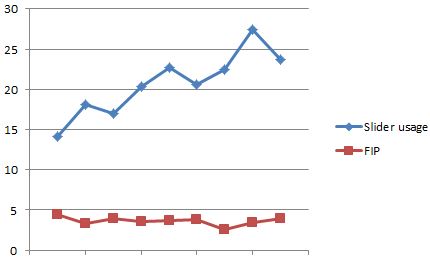 Turns out there is a correlation: -0.487. That means that the higher Corbin’s slider percentage goes, the lower his FIP; it also means that his slider usage could explain about half of the variation in his month-to-month FIPs. Pretty wild.

Quality in 2015 — Will Corbin throw the slider as often?

The fact that Corbin’s dominance at the outset of 2013 wasn’t expected makes for a cloudier picture. Before the 2013 season began, Dan Szymborski’s excellent ZiPS projection system saw Corbin as a 4.23 ERA pitcher (slightly worse than average, 102 ERA-) with a 3.97 FIP (95 FIP-, or slightly better than average). In the universe of major league starting pitchers, that’s worlds away from the 3.41 ERA and 3.43 FIP with which Corbin ended the season, which includes his terrible finish.

If a guy was thought to be decent, pitched spectacularly for four months, then pitched horribly for two, is his next season likely to split the gap? That was going to be one of the great mysteries of 2014 and I was excited to find out. But the ZiPS projections for 2014 did think Corbin’s 2014 would have been fairly close to his overall numbers in 2013, with a 3.53 ERA and 3.61 FIP, good for a solidly above-average ERA (89 ERA-) and FIP (91 FIP-).

If the data above about Corbin’s slider is any guide, his performance in 2015 may depend in part on how frequently he throws it. To help answer that question, I looked at slider-throwers who have returned from Tommy John in the past.

Just looking at pitchers who threw sliders before the surgery and who had the surgery between the beginning of 2008 and the end of 2012 (so that I had samples on both sides), I got raw pitch counts for all 43 pitchers who fit my criteria. The pitch counts I used were the season preceding the surgery, so long as they’d thrown at least 100 pitches (if they didn’t, I combined it with the previous season), and the season when they returned (same thing, 100+ pitches, combining it with the season after if it fell 100 short).

The results were surprising. The average slider percentage before surgery was 17.37%, but the percentage after was 17.41% — no drop at all. Weighting each pitcher’s percentages by the pitch counts used, the relationship was basically the same: 18.64% before, and 18.61% after.

There was a ton of variability. 25 of the 43 pitchers saw their slider percentage change by more than 5% of usage (e.g., a rise from 20% to 25.5%), but the differences went in both directions; 20 of the 43 used their slider more frequently when they returned, the other 23 using the slider less frequently.

In other words: there’s no reason to think that Patrick Corbin will use his slider less frequently in 2015 than he did in 2013, but there is reason to think that his usage could change quite a bit. If he uses it less frequently, it may be that a 3.50 ERA is an optimistic projection. If he uses it as frequently or more frequently, and if his struggles at the end of 2013 were due to innings or some kind of pre-injury, it could be that the Corbin of 2015 is more like the top starter we saw at the beginning of the 2013 season.