Things may get a little thin toward the bottom, but next year’s lineup looks to be quite good at the top if everyone stays healthy. A.J. Pollock was a monster last season, Aaron Hill has typically been an above-average hitter, and Paul Goldschmidt can’t be beat. Against left-handed pitching, Mark Trumbo should produce runs at an above-average clip, and when the team faces a righty, it can look to add solid-or-better performances from Miguel Montero and David Peralta.

Jake Lamb got torched by southpaws in limited action last season, but he has not shown anywhere near the same platoon split in the minors. If he and Didi Gregorius can post above-average offense against right-handed pitchers, at least, and Chris Owings is no slouch.

We’ve talked about how the roster shakes out in print and on The Pool Shot, even handling what we’d like to see versus LHP and versus RHP. Not much has changed; despite GM Dave Stewart‘s recent statement that the club will tender Cliff Pennington a contract, I’d still push for a 4-man, 3-position infield situation in which Owings, Lamb and Hill get a little more rest than the average player, with Didi Gregorius playing about 60%, starting only against right-handed starters. The fact that Trumbo is apparently going to play right field seems like a minor tragedy, but a platoon with Ender Inciarte wasn’t going to happen anyway (and neither will a Trumbo/Peralta platoon, which would be the equivalent of an All-Star or better). The Trumbo move, however, may be seen as a way to get Inciarte regular time in left field, which is a positive in my book. Peralta is a poor platoon partner for Inciarte because they both hit left-handed, but Inciarte seems likely to get leftover starts in center and right.

It’s a lefty-heavy lineup, or at least it could be on days when the team faces a right-handed starter. If (a big if) Trumbo rides the pine, then Montero, Inciarte, Peralta, Lamb, and Gregorius would leave just three right-handed batters in the lineup (Paul Goldschmidt, Pollock, and either Hill or Owings). Even when the D-backs wish to stack a lineup for a southpaw, unless Cody Ross gets a rare start there’ll still be three lefties in the lineup (Montero, Lamb or Gregorius, Inciarte or Peralta).

Good news for Inciarte: between he and Peralta, he’d be the clear favorite to start against a lefty. Although the sample is not huge for either player, Peralta had 348 plate appearances (just over a half season), and his platoon split could not have been more pronounced: 32% above average in creating runs against RHP (132 wRC+), and 62% below average against LHP (38 wRC+). That’s run-for-the-hills territory. I’ll always believe that left-handed hitters who are late to hitting professionally (like Gerardo Parra and Carl Crawford) can improve against left-handed pitching — but only with a ton of plate appearances. Peralta did so bad against lefties that he could improve in a big way and still be a big liability against southpaws. Don’t expect him to get much of an opportunity to change that.

In contrast, Inciarte had virtually no split at all, which borders on the bizarre. In 447 PA, Inciarte created runs at a 10% below average clip against RHP and a 20% below average clip against LHP. The batting averages are almost identical: .279 (vs RHP) and .273 (vs LHP). What’s more, as Jeff and I talked about on Episode 5 of The Pool Shot (forthcoming), Inciarte had the look of an above-average hitter for the final two months of the season (119 wRC+ in August, 109 wRC+ in September). He was impossibly bad in limited action when he came up in May (-3 wRC+, or 103% below average), and pedestrian in June (77 wRC+) and July (70 wRC+). Maybe he’s not an above-average hitter, but it sure looks like that’s possible.

As you might expect of someone with the bat control to hit not only above average (by a 27 point margin) but hit well against same-handed pitching, Inciarte does seem to have something of a knack for hitting it where he wants. Baseball-Reference tracks “productive out” statistics, counting opportunities and success. Opportunities are pitcher sacrifices with one out, advancing any runner with none out, and driving in a baserunner with the second out of the inning. Hitting mostly leadoff, Inciarte had just 25 such opportunities — but converted 10 of them for a 40% success rate. Goldy has a 35% career success rate, only getting up above 40% for the first time in his near-MVP season of 2013. The MLB average success rate is 31%.

What about the fact that Inciarte hits a lot of balls on the ground (51.6% GB rate)? Should we be worried about double plays? Maybe not. Again in a very small sample, Inciarte has shown a knack for keeping out of double plays; he’s hit in 54 such situations (man on first, less than two outs), and hit into just three (6%; MLB average is 11.1%). Again, bat control. 14 times, he strode to the plate with a man on third and fewer than two outs — that man scored 9 of those 14 times (64%; MLB average is 51%).

Situational hitting makes Ender Inciarte appears to make better than his 87 wRC+ would indicate. That’s a big part of why his RE24 is positive (1.2) despite the wRC+ being below average; RE24 compares run expectancy before a player’s at bat to the run expectancy after a player’s at bat. And although making an out hurts both numbers, it hurts a player’s numbers less in RE24 if the hitter is better at making “productive outs,” because wRC+ is context-independent and RE24 is exactly about context.

Would Inciarte get more hits with a runner on first?

Inciarte hit a lot of leadoff last season (and had a 101 wRC+ there, for what it’s worth). He was plugged in there for 76 games, compared to 21 games in the 8th slot, 12 games in the 9th slot (mostly through double switches), 9 games in a sprinkling of other slots in the middle of the order. Not once did he hit second.

I didn’t even think to question that, until an errant note in a recent Buster Olney notebook ($) over at the mother ship, which said “[t]ypically, teams like to have a left-handed hitter batting No. 2, to take advantage of the hole on the right side of the infield with a runner at first.” I still learn new things about this game every day, but if true, that’s a pretty big omission from my mind’s databank. If true, I think this phenomenon gets disguised by the fact that teams like to stagger handedness in the lineup (for good reason), and teams tend to have more right-handed hitters.

But as noted above, the D-backs are slated to have an unusual number of left-handed hitters, all the more unusual because the team’s best hitter isn’t one of them. As much as I’d love to see Paul Goldschmidt hit second or fourth instead of third, he’s the #3 hitter (and the difference is not large). That means that if two of the top three hitters are left-handed, they’d probably have to hit in consecutive spots, something the team seems unlikely to do.

So let’s say it’s Ender Inciarte up there, and not David Peralta. Should he continue to hit leadoff? Or should he be moved to second? If he is, will the hole created by holding a runner mean Inciarte has more success?

He seems to be a good candidate. From Daren Willman’s amazing baseballsavant.com, here’s an Inciarte spray chart just for situations in which there was a runner at first base: 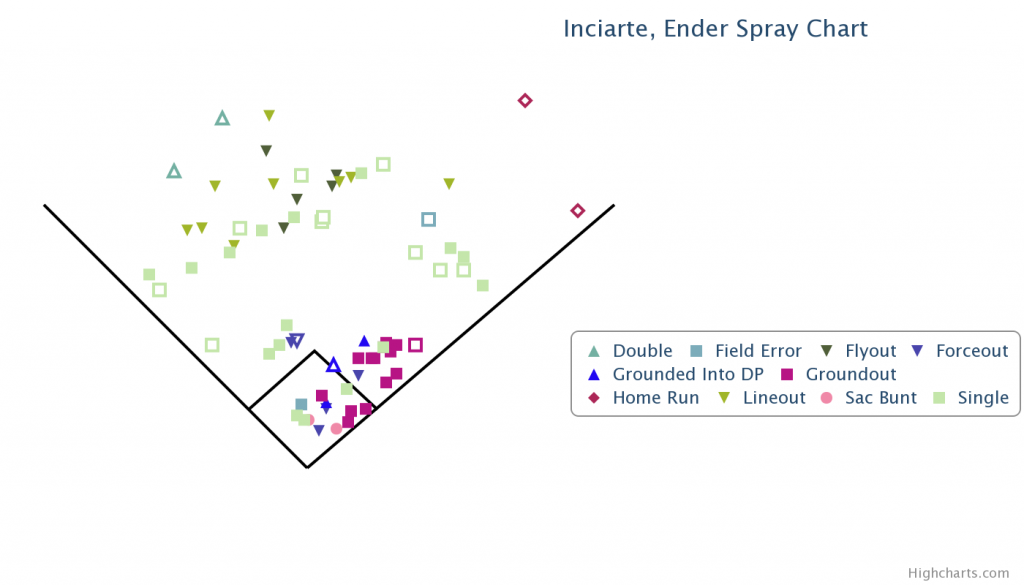 But here’s the problem: he’s too good a candidate. Despite the first baseman presumably holding a runner on in a lot of the situations in the above spray chart, there are only a handful of singles up that hole. See the one magenta square that’s just an outline? That’s this play:

No question, this was a great play on the part of Brandon Phillips, but it illustrates the point (and apologies for the small size; has to do with the length of the clip). As you can see about halfway through, the Reds didn’t have a shift on per se, but shortstop Todd Frazier is playing closer to the second base bag than he normally would, freeing Phillips up to play closer to first.

Yes, the first baseman probably would have been there if he wasn’t holding a runner. But Inciarte hits the vast majority of his ground balls to his pull side, and opposing teams have every incentive to guard against that, so long as there’s one or fewer runner. Maybe if Inciarte was more of an all-fields hitter on the ground, the reduced coverage overall would help. But if he was an all-fields hitter, then the supposed point of batting him second because he’s left-handed would all but evaporate, right?

Some small benefit after all

Getting the chance to hit with a runner being held at first may not help Inciarte get a hit, but it might help him hit into fewer outs. Remember, all of the batted balls in the spray chart are with a runner on first — and so long as there’s fewer than two outs (which is true more than half the time), that’s a double play situation. We saw above that Inciarte hit into just three double plays, and this may be why. 3-6-3 double plays are not easy, but they do happen — it’s just less likely when the first baseman is holding a runner.

There’s some measurable benefit there. A ground out is worth, on average, -0.24 runs in terms of run expectancy. A double play? More than double that, at around -0.85. There are only eight ground outs to the right side in the spray chart that seem to have gone past the first baseman (which is the advantage we’re considering). Let’s be generous, and say half of them would have been double plays (it’s probably more like two). Four non-double plays here is worth about 2.4 runs. Inciarte created about 46 runs last season (per “Runs Created,” the stat on which wRC+ is based); to somewhat inappropriately apply one number to the other, it looks like about 5% of Inciarte’s offensive value last season may have come from avoiding double plays just in that runner-on-first situation. Chances are, it’s even smaller.

To profit from the reduced coverage created by a first baseman holding a runner, it’s probably best to have an all-fields hitter in that spot. But A.J. Pollock hits the vast majority of his ground balls to the left side; despite his higher slugging mark, there may be some benefit to hitting him in front of Inciarte, if those are the two players that are going to hit in the first two slots. As with just about every lineup question, however, the difference would be very, very small.