David Peralta Not the Righty-Killing Hero the D-backs Want, But the One They Need

David Peralta is starting to pull together a track record from which we can draw solid inferences. He is, essentially, a good-not-great fielder in right field with merely average power — and a knack for knocking the cover off of the ball. But he also has flaws, as we saw toward the end of the season, and as we started to see in his plate appearances versus lefties.

But first, let’s review. Back in mid-July, I looked at Peralta’s hot start and the evidence behind it, which suggested that what he had accomplished up to that point was not attributable to luck. Peralta came out of nowhere after shoulder injuries scuttled his pitching career and he languished in baseball limbo for three years, only to start putting up monster seasons in independent ball and an impressive body of work with High-A Visalia and Double-A Mobile. For more on Peralta’s history, please check out that piece from July.

One thing that stuck out with Peralta’s track record: he’s always hit for high average. Opening this season with Mobile, he hit for the lowest batting average of his career (then to date): a .297 mark. Before that he hit .392 (373 PA) and .332 (423 PA) in independent ball, started off similarly in 2013 (.352 in 194 PA), and then essentially matched that performance in High-A after getting snatched up by the D-backs (.346 in 219 PA). After hitting 17 bombs in that first independent ball season, he hasn’t hit for much power — just 33 home runs over his 1407 PA from 2012 up through the present. And yet his slugging percentages have been pretty good, on the back of some impressive gap power.

Peralta’s total bases per at bat was higher than Trumbo’s, but it was also of a better kind. Home runs are great, but a bomb and a flyout is generally worth about 1.11 runs, and two doubles is worth about 1.54. The out makes that kind of difference (using this run value of events table, a home run is worth 1.39 runs, a double 0.77 runs, and a flyout -0.24 runs). Indeed, it’s pretty clear that Peralta’s method of totaling bases is the superior one.

You might say that Peralta was lucky in 2014. He had a .328 batting average on balls in play, which is significantly higher than the league average, which hovers around .300. ESPN Stats & Info generates a “hard hit average” statistic, and when I limit that to just balls in play, Peralta comes in at a .210 hard hit average, which is just above average. Probably, Peralta was a little lucky. But from the hard hit information, we can probably conclude that he wasn’t a lot lucky. And one wonders if any expected BABIP regression can be made up by the fact that last year was Peralta’s rookie season, and we would normally expect him to improve in his follow-up campaign.

Good news, right? Peralta was one of the best hitters on the team in his rookie year, and you’d think that would put him in line to start again. In small samples in the outfield, he was terrible in left field, mediocre in center, and very good in right — overall, roughly average for an outfielder. He doesn’t get an extra push to his value from defense like Ender Inciarte does, but he doesn’t take a penalty like Trumbo should, either.

The problem is that Peralta can’t hit a lick when he’s facing lefties. He had a 38 wRC+ against lefties last season, meaning he was 62% worse than the average non-pitcher. Tuffy Gosewisch would be a better choice against a lefty than Peralta. Against lefties, Peralta had a triple slash of .197/.247/.263. Not good. Really just not good. To reach 110 wRC+ overall, though, Peralta scorched righties to the tune of .312/.342/.506. Over .500 slugging! Against righties, Peralta was just as good as Pollock was overall, and no one is dreaming about benching Pollock. 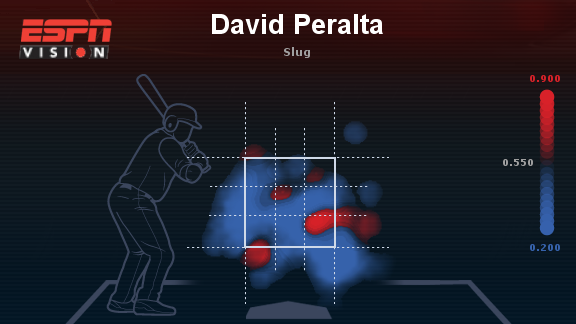 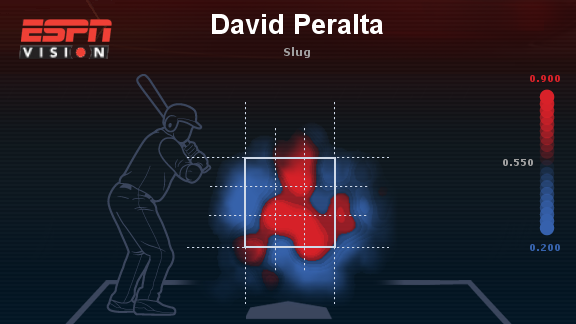 By the way, Peralta had some pretty good coverage of the plate against RHP in terms of slugging — a ridiculous 1.417 SLG up and middle, but also nothing lower than .538 for all but three ninths of the zone (up and in, middle in, up and away). Actually, he had pretty good slugging marks away off the plate, too. Many flawed hitters have one happy zone. Peralta has a happy zone at the bottom of the plate, but still gets those up and middle balls. Just reminds me a bit of Goldschmidt, who took a big step forward when he added low and in to his 2012 happy zone of the top part of the plate.

The problem is that Peralta is old. As noted here before:

Peralta had 348 plate appearances (just over a half season), and his platoon split could not have been more pronounced: 32% above average in creating runs against RHP (132 wRC+), and 62% below average against LHP (38 wRC+). That’s run-for-the-hills territory. I’ll always believe that left-handed hitters who are late to hitting professionally (like Gerardo Parra and Carl Crawford) can improve against left-handed pitching — but only with a ton of plate appearances. Peralta did so bad against lefties that he could improve in a big way and still be a big liability against southpaws. Don’t expect him to get much of an opportunity to change that.

It may be that lefties take longer to improve against same-handed pitching in general (our intrepid Jeff Wiser has been hot on that trail with a big-time research project), but Peralta is even farther behind the 8-ball given that he didn’t start hitting full-time until he was 23 years old. Unless 2015 was completely written off, it just wouldn’t make sense to give Peralta a chance to develop against LHP in the majors. He is what he is: a strong-side platoon bat, and a fantastic one at that. He is Ike Davis, basically, except that you can move him around in the outfield.

The “play Yasmany Tomas at third base” plan is a good thing for Peralta, who probably stands to be most affected if Tomas is put into the outfield mix. Pollock is set, and although Trumbo and Peralta would be an amazing platoon, Trumbo will almost certainly get a full-time job, as well. That leaves just one starting OF slot (apparently in left, since GM Dave Stewart has stated that he plans to put Trumbo in right).

Assuming no Tomas in the mix (and assuming that Tomas doesn’t push Jake Lamb to the outfield), we’re still looking at three outfielders (Peralta, Inciarte, Cody Ross) for one position, left field. If Ross sticks on the roster and he’s vaguely productive, he’s a good match for Peralta. Inciarte doesn’t have a big platoon split, so even though there’s no way to juice extra value out of Inciarte, at least he could also help cover for Peralta.

And then there’s the fact that while you can deploy position players based on the handedness of the opposing starting pitcher, there’s only so much you can do to protect platoon advantages late in games. Say Peralta was starting left against a right-hander. If Peralta racked up a third plate appearance against the starter in, say, the sixth inning, it would also make sense to immediately pull him in favor of Inciarte, who could immediately give some value back in the form of plus fielding for the rest of the game, while being largely immune to relief pitcher matchups. From a production-at-the-plate standpoint, pairing Peralta with Inciarte instead of Ross or Trumbo is far from perfect. But if Inciarte was also used as a defensive replacement, the team could still end up ahead from the standpoint of overall production.

Just as Ross complicated the outfield picture last offseason (and he only does now in a much more minor way), it’s Trumbo that gums up the works now, in that the preoccupation with HR totals is keeping in the starting plans in a way that seems sub-optimal. A Trumbo-Inciarte platoon could be outstanding, all the more now that the team has a fly ball pitching staff. But a Trumbo-Peralta platoon could also be a strong choice for the team, especially if it is more concerned with offense in particular.

On its own, however, the promise that Peralta can torch right-handed hitters should convince the D-backs to stay away from the free agent and trade markets, at least as far as outfielders go. The team wants a left-handed thumper? No problem. They already have one that kills RHP, comes with six more years of club control, and will play for the major league minimum for at least two more years.

5 Responses to David Peralta Not the Righty-Killing Hero the D-backs Want, But the One They Need