Unraveling the Mystery of Jeremy Hellickson

Although Rubby De La Rosa and Allen Webster are both penciled into the April rotation, only Josh Collmenter and Jeremy Hellickson are so cemented into the team’s immediate plans that a very poor spring training would not result in their demotion. We know and love The Tomahawk, but who is Hellboy?

Last season, Hellickson pitched to an underwhelming 4.52 ERA in 63.2 innings, largely on the back of a four-seam fastball “good” for -1.27 runs above average per 100 pitches (per PITCHf/x Pitch Values). To put that into some context, last season American League starters gave up 6,272 earned runs in 14,400.1 innings — if we pretend for a moment that a 100-pitch start generally translates to six innings, that’s an average of 2.61 runs per start. Tack on 1.27 runs (for a fictional Hellickson start of 100 four-seam fastballs), and that’s increasing runs given up by about a third.

Over the last two (partial) seasons, Hellickson’s repertoire has more or less been limited to four pitches, although he’s thrown some cutters and splitters in the past, and there’s a decent chance we’ll see the splitter take on more of a role in 2015. From Brooks Baseball, here are how his pitches have broken down (note he threw just 36.1 innings in 2010):

While Hellickson was mostly a four-seam/changeup pitcher to start his career, he’s gotten craftier as the seasons have worn on. Narrowing the field to his four main pitches — four-seam, sinker, curve, change — here’s how the pitches have stacked up year to year in terms of PITCHf/x Pitch Values per 100: 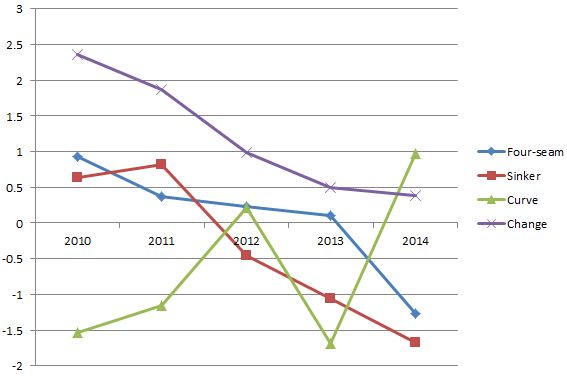 It was only last season that Hellickson’s four-seam went from asset to liability, but with the exception of 2010-2011 sinkers, we’re not dealing with small sample sizes here. In his first two full seasons, Hellickson had very good results: a 2.95 ERA (2011, 189 IP) and a 3.10 ERA (2012, 177 IP). Despite the big change in four-seam effectiveness between those two seasons, it seems like his changeup carried the day.

Not so in Hellickson’s more recent work. As we covered when the Hellickson trade went through, he’s always been a Fielding Independent Pitching enigma, pitching much better than his batted ball, strikeout and walk rates predicted in 2011 and 2012. FIP considers Hellickson to be almost exactly the same pitcher throughout his career. He’s just been stung by poorer results when balls are put in play — his walk rate and his strikeout rate have actually been better in 2013-2014 than they were in 2011-2012.

And it’s not velocity. Pitch to pitch, Hellickson’s velocity has been almost bizarrely consistent: 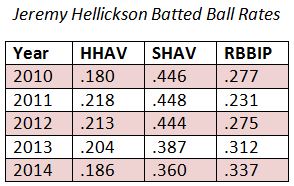 Or does it? HHAV does nothing at all to explain why Hellickson had great results through 2012 and poor results from that point on. In fact, all HHAV would tell us is that Hellickson might have done a bit better. But SHAV?

Not every batted ball is classified as hard or soft by ESPN; “soft” really means soft, as in an out seems like a very sure thing. In the first three years of his career, Hellickson was near-excellent in terms of inducing these softly-hit balls. In the last two, he was near-awful. We’ve got our first big thing that correlates with results.

There is one intermediate step between the quality of batted balls and earned runs — how many of those batted balls resulted in a batter reaching base. That’s why I included RBBIP in that table — it’s basically Batting Average on Balls in Play (BABIP), except that it includes runners reaching on error (where a .300 BABIP is usually a safe bet to be league average, league average for RBBIP is about .305). What we see in RBBIP seems to confirm what we see in SHAV: Hellickson was a particularly great contact manager, and then he wasn’t.

We still don’t know why. It’s not like his stuff got worse, or like his pitch mix changed dramatically; and anyway we wouldn’t expect that, since the explanation is SHAV and not that Hellickson gets more mistakes hammered by batters.

Going year to year and picking out SHAV:

I trust Brooks Baseball on pitch classification and you should too, but there’s a disagreement in the ESPN database about what Hellickson’s Other Fastball is (cutter, a second kind of fastball, maybe a sinker after all). Besides the point — breaking out four-seam and “hard” didn’t reveal a trend. But look at Hellickson’s other two pitches!

His curveball broke downhill (pun intended) even before Hellickson’s results changed, slipping a bit in 2012. By 2013, if his curveball was an AL pitcher, it would have been one of the worst pitchers in the league in terms of getting softly-hit batted balls. In Hellickson’s 2014 stint, the curve was yet one step less effective.

It’s the changeup, though, that seems to explain everything — despite the fact that in terms of HHAV, the change actually got more effective during the same four years (.182, .164, .132, .112). Hellickson’s results fell off the table at the same time that his changeup went from being a super plus plus pitch in terms of softly-hit balls to a flat-out mediocre one.

Can it really be that simple? Many things in baseball teeter on the edge of a knife. Give up the occasional walk, say, 1.5 BB/9, and the walks really don’t cost you much — but triple that to 4.5 BB/9, and the walks start doing 5 or 10 times the damage. Two outs in an inning instead of three wouldn’t reduce scoring by a third, but by well over half. Maybe it actually is that simple.

Regardless, there’s a lot of luck in the History of Hellickson — great luck, very poor luck, and all in bunches. And while his velocity has stayed static, Hellickson’s shoulder issues could explain how his recent ineffectiveness has come disproportionately from his curve and change. There’s still a very wide range of outcomes for Hellickson next season, and it won’t be until he pitches that we can start to get a feel for how Chase Field and different catchers might affect him.

Having zeroed in on (the lack of) weak contact on Hellickson’s changeup and curveball, though, there’s more to address. Next week, we’ll take our inquiry to the video, to see if we can pick anything up — and to see whether great framing in Tampa Bay helps us figure out what happened.

9 Responses to Unraveling the Mystery of Jeremy Hellickson