Last week, I took a crack at finding out why, despite very consistent Fielding-Independent Pitching marks, Jeremy Hellickson had wildly different results in 2013-2014 as opposed to 2010-2012. The answer, it seemed, was that Hellickson’s success in getting weak hits on his curveball and change all but disappeared. In last week’s piece, we took a look at some other possible explanations, and I’m not saying we can be sure that something happened with the curve and change — after all, Hellickson did deal with a significant shoulder issue that also cost him time. Nonetheless, let’s see if we can pick up some differences in how he’s thrown his pitches.

As a backdrop, let’s start with Hellickson’s “hard” stuff. Although he used to throw his four-seam fastball more than half the time, more recently he’s settled in the 40%-45% range in terms of pitch frequency. Brooks Baseball has picked up a fair number of sinkers recently, some cutters and even a handful of splitters last season. Regardless, Hellickson has seen his Soft Hit Average (SHAV, as calculated by ESPN Stats & Info) drop from from an outstanding .451 in 2011 to .420 and .424 marks in 2013 and 2014 that were still excellent.

On the flip side, though, Hellickson has also seen his hard stuff get punished more often. To put the 2014 HHAV in context… ESPN notes that league average was .167 HHAV on hard stuff, and a .210 HHAV put a pitcher at the 10th percentile. That’s only derived from 88 qualified pitchers, but you get the idea: a .254 HHAV is horrendous.

The reason why this very high HHAV on hard stuff doesn’t seem like an explanation for what made Hellickson either Jekyll or Hyde is that it’s always been the case that his hard stuff got hit hard more often than the hard pitches of his peers. He compensates for that (or he has in the past) with a very high SHAV, but that may not always work.

More evidence that Hellickson’s hard stuff is feast or famine for batters is the RBBIP numbers. Recall, .305 or so is about average for RBBIP, which is Batting Average on Balls in Play but with the inclusion of Reached on Error (which I thought especially appropriate when trying to get meaning from hard- and soft-hit averages). Despite very high HHAVs on his hard stuff in the last four years, Hellickson was able to maintain below average RBBIP totals; he was either incredibly lucky in a difficult-to-believe kind of way, or it was more the case that either you hit Helly hard, or you probably didn’t reach.

Hellickson’s hard stuff was at its batted-ball best in 2011. That was a year in which Hellickson started 29 games, and in only five of them did he have more hits allowed than innings pitched. He did, however, give up 21 HR in 189 innings. Here’s a Robinson Cano groundout on a 89 mph sinker in the fourth inning of an excellent 8.2-inning, 0-ER start against the Yankees on April 8, 2012.

And peppering the same up-and-away corner with a 91 mph four-seam against Nick Swisher in the sixth:

Other than giving you an idea what these two types of Hellickson fastballs look like, these GIFs are mostly window dressing. But these are examples of the pitches working. Cano goes right over the top of the sinker, and Swisher misses completely under the four-seam.

The curve has continued to be a tremendous weapon for Hellickson against left-handed hitters; their HHAV against the curve in the last three seasons was .111, .111 and .065.

Sometime toward the end of 2011, Hellickson changed his curveball grip, which changed everything. He did it, apparently, to get more “depth” — and that’s exactly what it did: 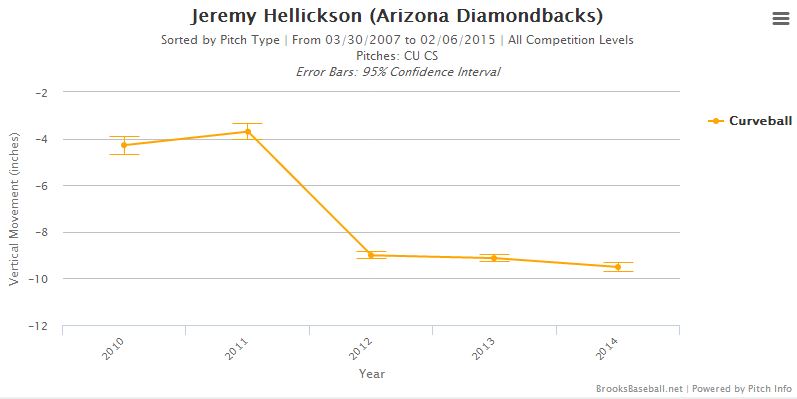 An extra five inches or so of downward break on the curve! And as we saw last week, there was essentially no change in the velocity of this pitch (or any other pitch). One would think this would work better, not worse. I have no evidence to back this up, but could it be that it is now so different from his other pitches that it’s easier to pick up?

The increased vertical break with the new curveball grip did come with a (small?) cost:

Unfortunately the MLB archive I’m using only has video available back to 2012, so you’ll have to use your imagination for the older, shorter curveball. The Jason Collette piece I linked to above has a great split pic on the curveball grip, though, and you can search your own memory for confirmation that there really is pretty good downward break on this curve. Here’s a beauty from a September 2012 game against the Red Sox in which he had four strikeouts with the bender:

That’s Jarrod Saltalamacchia (our hero two days ago) failing to check his swing; the other three strikeouts on the curve that day were looking. One of those other guys was Ryan Lavarnway. Here’s what Lavarnway was looking at:

Tons of vertical break means being able to drop that guy in there from the top. Pretty great.

Still, via the Collette piece, we pretty much have what we’re looking for. The new curveball is a lot prettier, but for some reason (Effective Velocity?) it just hasn’t been as effective. It seems weird to recommend that Hellickson go back to the “inferior” curveball, but wouldn’t it make sense?

Ah, the real jewel. Back to our starting point:

Yes, the Hard Hit Average improved. No, that improvement is not trivial. But as we saw last week, it seems to be SHAV that best explains the difference between his 2010-2012 performance and his 2013-2014.

And in the end, we need not really even focus on the “why” for the change in the changeup’s effectiveness; we need only look at results. That’s RBBIP, and that stat shows that the pitch went from being excellent to being mediocre or even terrible.

Here’s the Hellickson changeup doing its magic in a 2012 start against the Athletics. Josh Reddick had just flied out in foul territory on a changeup (although he homered off a change earlier in the game), and here Yoenis Cespedes makes no contact at all:

There’s no large mechanical explanation for what went wrong with the changeup the next year. His average release point on the pitch has barely moved a tenth of an inch vertically or horizontally from year to year. The movement on the pitch, however, has changed quite a bit.

Hellickson saw his horizontal movement on the changeup get reduced by about an inch on average between 2012 and 2013, although he got it back in 2014. Basically, there was less of what looks like sideways fade in the Cespedes GIF above.

That’s a pretty steady march in terms of lost movement on the changeup, and again, as with the curveball it’s not like there’s been a change in velocity.

Still, if you can see that in a GIF, you’re a far better scout from me. Here’s a Xander Bogaerts strikeout in late September last year:

Hellickson avoids up and to the glove side of the plate with his changeup like you wouldn’t believe; he threw zero changeups to that ninth of the zone in 2014. In fact, the only changes he threw to his glove side off the plate were also below the strikezone. From ESPN Stats & Info, Hellickson has been very particular about where he’s thrown the changeup in the last two seasons: 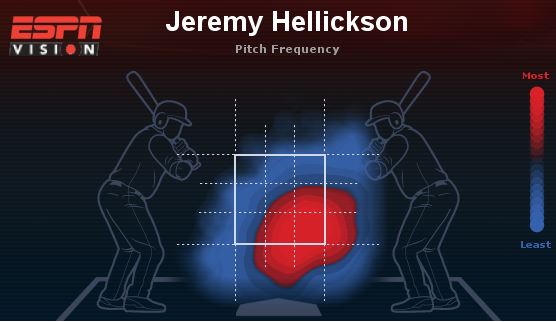 Note: this is against lefties AND righties. Take my word for it, there’s almost no difference between the two heatmaps. He’s clearly aiming for down and to his arm side, more often than not. Good; just in terms of balls hit in play, opponents have slugged just .317 against changeups in that ninth of the zone. But there’s still a problem. 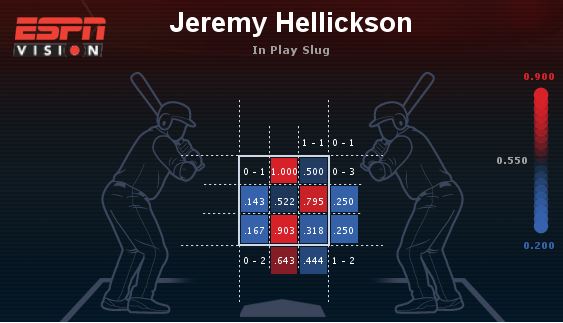 You can probably see it right away. Sure, down and to his arm side works out well, but when he misses — either up, or to the middle of the plate — the pitch gets punished. Compare that to how the pitch fared in terms of the same metric, but back in 2011: 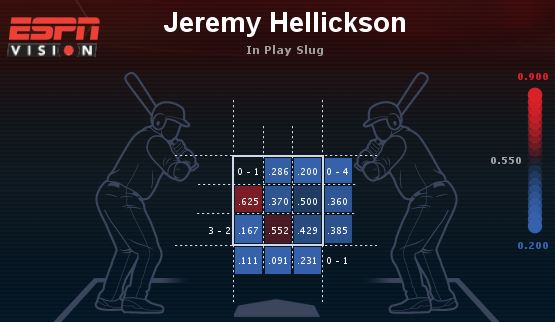 This isn’t necessarily a matter of throwing a pitch in a different part of the zone or going back to a different grip — the pitch is just much less successful now. It’s not a matter of velocity separation between the change and other pitches, because again, the velocity of each pitch has stayed very much the same.

Could he be tipping the pitch? Take a look at this graph from Brooks Baseball tracking horizontal release point: 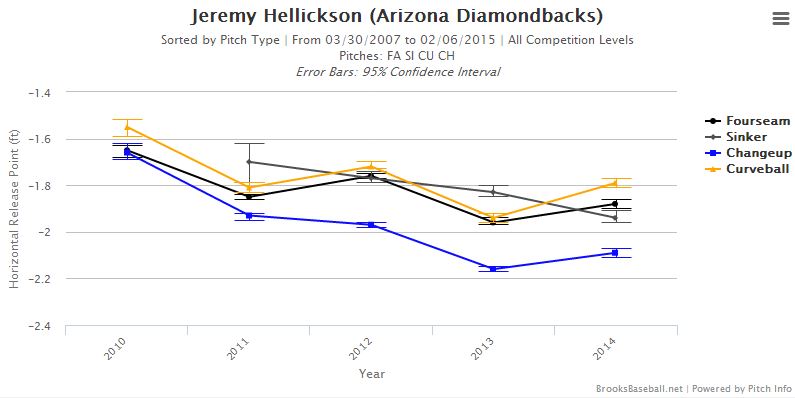 I can’t see it on the video I’ve watched, but where the horizontal release point on all of Hellickson’s pitches tended to be within about two inches or so back in 2010, the paths began to diverge. In 2012, the difference with the changeup looked to be more like four or even five inches, and if it took his competition a little while to pick up on that, you could see how that might only have affected the changeup’s performance later on, perhaps starting in 2013. Just a theory.

Theory is all we have, really. The D-backs should see if they can standardize Hellickson’s release point a bit better for the changeup, and as weird as it sounds, they might do well to send him back to the old curveball grip. There’s going to be a lot of wait and see with Hellickson in a D-backs uniform, but from a stuff and from a results standpoint, he’s got to be one of the most interesting pitchers active right now.