On Defensive Value and Ender Inciarte

Over the last decade or so, defense has become an increasingly important aspect of baseball. When the Steroid Era slipped away and the old, plodding sluggers capable of hitting 40+ home runs per season all but evaporated from the game, they were often replaced by younger, faster players who could at least help prevent runs even if they weren’t capable of launching moonshot after moonshot themselves. The Mariners took this strategy to new heights in the mid-2000’s, and even though it didn’t exactly pan out, the efforts Seattle took to save runs was, at the very least, enlightening. They proved that they could prevent runs drastically if they chose to fill out the lineup card with defense in mind.

The Mariners’ defensive game plan was driven by data in a time when defense appeared to some to be the next “Moneyball” idea. On-base percentage had been figured out; defense was the new horizon. But there’s a flaw in defensive data: it’s wildly unstable, at least insofar as it compares to other aspects of baseball (like strikeout rate, isolated slugging and more).This principle leaves us in a strange place when we evaluate players because, while Ultimate Zone Rating (UZR) factors directly into WAR (the main value metric for players), we know that UZR can be wonky and somewhat unpredictable. Don’t get me wrong, it’s not like UZR is going to claim that Mark Trumbo is Franklin Gutierrez, but just how good or how bad a defender is can vary significantly even if we don’t necessarily see an erosion of skills on the field with our very own eyes.

That’s led some to just dismiss defensive data altogether, but that’s surely the wrong course of action. Just because we don’t have a perfect understanding of something doesn’t mean it isn’t still valuable. In the case of defensive metrics, rest assured, they’re useful. Teams use them when signing free agents, promoting players or working out contracts. This stuff might not be completely bulletproof, but it’s still a very useful baseline and the metrics themselves are always improving. The versions now are better than those of the past, and with StatCast coming out, we’ll surely see further improvements in the very new future.

And I guess all of that was a really big setup to say this: I’m not sure I know how good Ender Inciarte really is.

If you’re a regular reader here at Inside the ‘Zona and/or listener of The Pool Shot, you’re probably well-aware that we like Inciarte more than most. The organization seems to view him as a 4th outfielder although I think I can speak for Ryan when I say that we believe that he’s worthy of being a starter on a second-division team (like the Diamondbacks) at this very moment, given what we know about him. But can he be more than that? Should we even buy the analysis that we have on him right now? After spending some time thinking about it, I’m still searching for a conclusion.

And it’s all tied to his defense. You’re likely aware of the fact that Ender Inciarte rated as the 7th-most valuable defender at any position in 2014 (min. 400 PA’s). For outfielders, he was the 2nd-most valuable on a rate basis, trailing on Juan Lagares of the Mets. Couple these two things together and we can tell that, according to the metrics, Inciarte was one of the very best defenders in all of baseball last year. Since his defensive value rated so highly, Inciarte was viewed as a highly-valuable player for the D-backs overall, despite the mediocrity of his bat (87 wRC+).  Yes, the bat was sluggish for a good chunk of the season, but because the defensive metrics liked his work in the field so much, FanGraphs assigned him 2.9 WAR over just 118 games.

Let’s return to the earlier discussion of defensive metrics now. Since they’re somewhat unstable, and since Inciarte’s value is so closely tied to his defense, well, his value may be considered unstable as a result. Yes, Inciarte was above league average at the plate in the final two months of the season but the projections aren’t buying it as a long term trend. Add those projections to the scouting reports of the past and it may be aggressive to think Inciarte will ever be anything more than average offensively, and realistically, might end up below that mark. So, Ender Inciarte will likely remain a defense-first player for the foreseeable future, and while he put up great defensive numbers as a rookie, there isn’t a great precedent for that holding up over the long-term.

I decided to explore the careers of several outfielders who’ve made their rookie debuts since 2009. Cut from the list were obvious corner outfielders who were never going to contribute much defensively, such as Yoenis Cespedes or Evan Gattis. Instead, I kept the list athletic and included players who are capable of playing more than one outfield spot since Inciarte is likely to see time all over the place going forward. Take a look at the graph below and tell me if you think that the defensive numbers are stable and predictable from year-to-year for the 16 players I selected.

Okay, there are a lot of colors, but do your best to track them across the time frame (2009-2014). Some players debuted in ’09, others not until ’13 and the rest in between. There’s plenty of ups-and-downs and almost nothing particularly steady. Maybe seeing the results in chart form will make it easier. 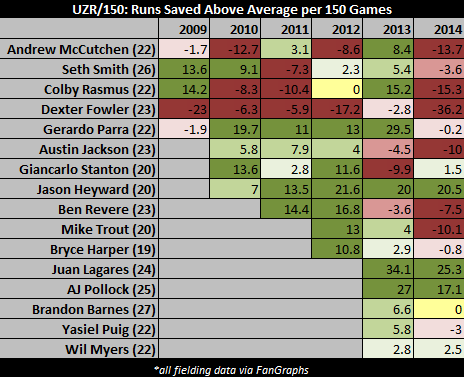 You’ll notice that the above chart tracks the players listed from their rookie season to present. In parenthesis is age of the player during his debut season. Each cell contains the player’s UZR/150 total which contains a bevy of information about said player’s defense, then rates how many runs above average the player saved (or gave up, Dexter Fowler) per 150 games. By putting this on a rate basis, we can easily compare players who may have missed some time to injury or sat out during a slump at the plate. I color-coded it for ease of use and to make it more visual. The darkest green represents extremely good performances, the dark red the worst performances, and the shades in between represent varying degrees of success. In essence, the more green the better and avoid red if possible, especially the dark red. By looking at the chart, we see three groups of players:

Yes, there’s plenty of inconsistency here. Outside of the truly great defenders, everyone else is up-and-down. And if there’s any trend to those ups-and-downs, it’s perhaps that guys get worse at defense as they age. It’s either that or the metrics themselves take some time to even out. We know that as players slow, especially in the outfield, that their range become limited and that’s going to hurt their defensive numbers. But, for a guy like McCutchen, Colby Rasmus, Ben Revere, Trout and Bryce Harper, that shouldn’t really be the case as they’re young and athletic enough to maintain a normalized skill set. In this case, either the player either got way better/worse during an offseason, maybe they tried to something new in the outfield (like positioning), were played out of position, or maybe the metrics just aren’t bulletproof like we discussed in the beginning. I’m doubting Mike Trout forgot how to play defense, these guys aren’t drastically changing their alignment all the time and most have occupied the same spot in the outfield regularly. That leaves us with the metrics to question.

And if the defensive metrics are questionable to a degree, at least when compared to most of the other data points we have about baseball players, then the certainty of Ender Inciarte’s value is, too. What happens to his value if he creates offense at a rate 10% below league average (a suggestion that’s actually friendly compared to the major projection systems) and he’s worth just five runs above average per 150 games? At that point, he’s a below average hitter who’s just okay in the field. That’s not special and it’s essentially the definition of replacement level. We’ve liked him in the past as a guy who starts somewhat regularly, but if the metrics are overselling his defense, then perhaps his real value is much, much lower.

And it really boils down to this: when a player’s value is almost entirely tied to his defensive performance, something that seems to be difficult to accurately gauge, then the player’s value is inherently questionable. That’s the nature of building the foundation of a player’s value upon defense. Sure, we know that Ender Inciarte is a good defender. We have eyes and they tell us as much. But precisely how good is entirely different and something that matters greatly to how he’s perceived, valued and ultimately how much playing time he receives.

So let me end by saying that I like Ender Inciarte and I think it’s quite possible that he’s currently undervalued by the Diamondbacks. But, I’m not comfortable saying that he’s a 3-win player based solely upon his defense. I’ve seen enough to know that I want to see more, but I’m not comfortable making guarantees on the value of defense, and the value of his overall game, just yet. Hopefully we’ll get a chance to make a more thorough assessment in 2015. With a crowded outfield situation ahead, we may never get the chance.

9 Responses to On Defensive Value and Ender Inciarte