Most national fans of baseball heard Robbie Ray‘s name for the first time fifteen months ago, when he was the featured prospect in what many considered to be an underwhelming return for Detroit in trading Doug Fister to the Nationals. Now making a bid for the D-backs rotation to start the season, Ray has seen his repertoire change.

Although average fastball velocity for a right-hander is in the 91-92 mph range, for a lefty that’s more like 90 mph. And so Ray has always set himself apart with his fastball velocity from the left side, averaging 92.44 mph last season, but 95 mph in his two September games, and 94 mph in two spring training games this season picked up by PITCHf/x. In his recent 4-inning, 1-run start on Monday, Ray averaged 94.45 mph with the fastball, throwing one 96.7 mph — the best velocity caught by PITCHf/x other than a 96.89 mph heater in early September last year.

Things get a little tricky after that heater, however, which he threw 61% of the time in 9 PITCHf/x starts last season. From ESPN’s Keith Law a little over a year ago, in response to the Doug Fister trade that sent Ray to Detroit:

Ray is the prospect, a potential back-end starter who shows four pitches but has nothing plus, although there’s some upside here if the Tigers can get him to lengthen his stride. His sharpest pitch is his spike curveball, but like most pitches of that type it usually ends up out of the zone, and his changeup is fringy enough that he’s had trouble finishing off right-handed hitters. He’s a project, a guy with some value but who could use some mechanical adjustments.

Sharpest pitch a curveball? Okay. The changeup has been a fixture for Ray, getting good results this spring. But the other two pitches — a curve and a slider — aren’t necessarily different things, but rather Ray searching for something that works. That’s what we just learned in an excellent piece from Nick Piecoro (please read the whole thing before continuing), who noted that Ray has “tinkered” with it “throughout spring training”:

When camp began, it was a true curveball. But in the past 10 days, he tried something different; he’s now unleashing a breaking ball that’s more like a slurve, he says, a pitch he uncorks in a similar fashion to his fastball.

“This is the best that pitch has felt, whether it be a curveball or a slider or whatever it is,” Ray said. “This is the most comfortable I’ve felt with it and the most confidence I’ve had with it. I feel like it’s in a good place right now.”

I started research on Ray a couple of weeks ago, and I just couldn’t figure it out. I thought maybe it was a symptom of having a changeup that was actually faster than his “slider” at the end of last season. A few starters have pulled that off, like Chris Sale and Jacob deGrom; several others had not, like Garrett Richards, Nathan Eovaldi and Corey Kluber. If you’re saying to yourself “wait, Richards, Eovaldi and Kluber are good,” you’re right. But Richards all but shelved his faster-than-slider changeup in 2013, and almost completely avoided it in 2014. Eovaldi threw it far less in his very good 2013 than he did in his good-not-great 2012 and 2014 seasons. And Kluber? His rise to prominence matches a drop in changeup usage almost perfectly (16.5% in 2012, 9.6% in 2013, 3.8% in 2014).

I thought that maybe, a slider slower than a pitcher’s changeup just wasn’t workable in most cases, and that both the slider and changeup were suffering, and that Ray would, essentially, have to pick one. Boy was I wrong. Piecoro’s piece put me on a new track, and that’s where the answers are.

We now have 11 games logged in which Ray pitched with the PITCHf/x system: four from last May, five from August-September, and two from this spring. It’s not enough to draw results conclusions (especially since three are relief appearances), but it’s definitely enough to see how things have changed for him in the last ten months.

Last year, MLBAM’s algorithm was all over the place in classifying Ray’s breaking pitches as either a slider or curveball. Through Pitch Info, Brooks Baseball has them listed as primarily curveballs in May, but primarily sliders in August-September.

The PITCHf/x data from May has no real pattern in spin direction, and the horizontal and vertical movement is all over the place. So here are the results, in buckets according to spin rate:

The story here is less that there were different kinds of breaking balls from Ray that may, and more that they were all over the place. Many of them were 74-75 mph, quite a few were right around 77 mph, and there were even three over 80 mph — including much more of a true slider on May 11, which was 84.2 mph, featured twice as much spin as any other breaking ball (1373), and, unlike the other pitches that had very little vertical movement or which moved downward, a full 7 inches of upward break.

When Ray returned to the majors in August, the velocity mix was much different. None of the pitches were below 250 in terms of spin rate, and most were over 80 mph. Suddenly, they all had an upward movement (as compared to a spinless pitch), although the horizontal movement — while generally more glove-side — was still all over the place. Velocity has virtually no correlation with any of the other categories in the table above. And so where sorting the May pitches into buckets was a stretch, doing so here would be disingenuous. So here they are, all together:

All we can really conclude is that, as Ray recently suggested in the Piecoro piece, Ray’s 2014 breaking balls aren’t necessarily two pitches, but variations on the same thing.

Here is the closest I could come to a pitch near the May average, one which had -1.66 inches of horizontal movement and -1.72 inches of vertical movement:

Having variations on the breaking pitch isn’t a bad thing. Adam Ottavino recently revealed to David Laurila of FanGraphs that he really throws three different variations of his slider, which helps explain why he throws it more than 40% of the time — and as August Fagerstrom noted in a follow up (with GIFs!), the “slurve” variety is the one that gets aired out most frequently.

Whereas Ottavino’s slider has been a real weapon, however, Ray has seemingly thrown one because having it or not having it could be the difference between being a three-pitch starter or a two-pitch reliever. The wild inconsistency of it, even within his two periods in the majors, suggests that trying to do multiple specific things with it a la Ottavino is probably unwise. But taken together, those two pieces of information do tell us that many different versions of the breaking ball could work. We can’t possibly say what Ray should do here without some results; we’re talking about very few pitches. If Ray seems to have found one he’s comfortable with, clearly he should go with that until batters tell him it’s a bad idea.

Here’s the thing: in Ray’s two spring training games picked up by PITCHf/x, what we’ve seen really is a totally different pitch. Only one was slower than 81 mph (77.6 mph). They all have strong horizontal movement. Vertical movement is much more consistent. And he’s putting much more spin on the ball most of the time.

The horizontal movement should really stand out to you, and note that the difference in vertical movement tells us that this is not a continuation of an adjustment that started in August. This is something new. In fact, the average spin rate in March is almost higher than his max spin rate from last year.

No big deal, huh? Except for the minor detail that the pitch had a 2787 spin rate, double his max from 2014 (see for yourself). On Monday, he snapped one off with a 4675 spin rate, but unfortunately there’s no video for that game.

The fact that it’s different is only part of the picture. The most important part is that in the two March starts picked up by PITCHf/x, the breaking pitch has been much more consistent. With just one exception, they all look like more or less the same pitch. Here’s a table of his March breaking balls: 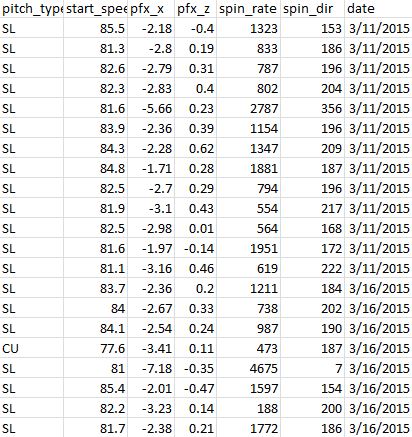 Compare that with one from a start last May:

This is incredibly good news. Robbie Ray actually has a third pitch, and it looks good, and he’s able to actually use it. This is exactly what it would look like if things started to come together for Ray.