Roundup: To Trade, or Not to Trade; Finding Cahill Chase Anderson and a New-Found Sinker Reliance

An Alternative Answer to Trevor Cahill

The saying that “there’s more than one way to skin a cat” always struck me as being spoken in poor taste. First, I’d argue that cats don’t project to taste well (low fat content, gamey, etc.) and, second, that the visual is distracting to whatever analogy the speaker is trying to make. No matter the argument, as soon as you throw that skinning cats thing out there, I’m completely unable to focus on the topic at hand. So, for argument’s sake, let’s change that analogy and say that there’s more than one way to end up with a 5.61 ERA. While it has the added benefit of being true, this analogy pertains specifically to our recent favorite subject here at Inside the ‘Zona, Trevor Cahill. Let me explain.

Ryan did some fabulous work late last week when he dove head-first into what was behind Trevor Cahill’s downturn. As we know, there’s more than one way to be bad, more than one way to end up with a 5.61 ERA. But we also know that ERA can be misleading, at least if we’re trying to find out how good a player is. ERA tells us what happened during a season while stats like FIP and SIERA tell us how talented a pitcher is. There’s a big difference here, since we can expect talent to carry over in a relatively stable fashion from year-to-year. We cannot, however, expect the same events to happen from year-to-year. If you’re looking to make bets, you want to know how good someone is.

And the results were kind of surprising and kind of not. While Cahill’s ERA has fluctuated wildly from one season to the next, his advanced numbers, FIP and SIERA, have remained pretty steady. Ryan was right in surmising the following:

Unless I’m missing something, the remaining explanations fall into three buckets:

1. Something Cahill was doing that led to his pitches getting hit harder more frequently (not luck).

2.Balls falling in for hits more frequently than we would expect them to (luck, or defense)

3.Inconsistency; SIERA and FIP have guessed wrong because they’ve assumed that Cahill’s bad stuff weren’t as lumped together as they were.

Through some very sound analysis and reasoning, Ryan was able to rule out, via data, the idea that Cahill was getting crushed more frequently, that his defense was letting him down and/or that FIP and SIERA were the incorrectly evaluating him. That left one final conclusion: Trevor Cahill has been, to some degree, the victim of bad luck. And while that’s surely part of the answer, I wanted to know even more. So just like you can skin cats a whole bunch of ways and there’s a boatload of ways to arrive at 5.61 ERA, there are other ways to evaluate Trevor Cahill.

*Note: I want to first point out that I wouldn’t have been able to come up with the following findings had it not been for the work Ryan did the first time around. That’s the beauty of teamwork, I guess. Ryan does the hard part and I steal from him. You’ve probably noticed this. I’m just kidding. Kind of. Okay, back to work.

Random variations happen and we see them all of the time, but Trevor Cahill looked to be struggling in 2014. I don’t know how to say it more succinctly, but he just didn’t appear to be able to put away hitters at times like we’d seen in the past. Sure, he wasn’t amazing in 2013, but he was fine. Last season appeared worse, for some reason. Therefore, I continued digging since Ryan had already eliminated a number or reason why he may have scuffled. The following surprised me: 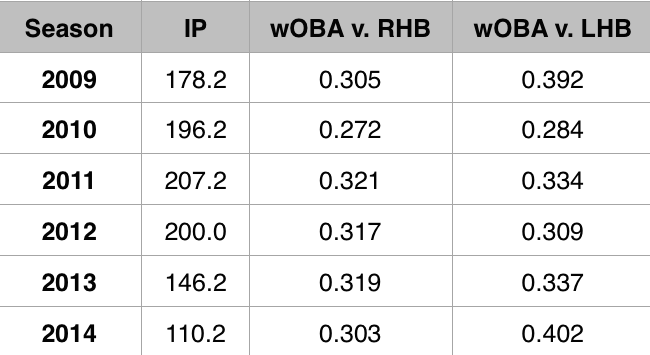 Do you see the outlier there? Cahill got smashed by lefties last season, and since he’s a righty, a performance split isn’t exactly unforeseen. But the magnitude as to which it happened was certainly larger and more overstated than anything we’ve seen from him in the recent past. It was way outside the norm and piqued my interest immediately. He was pretty good against right-handed batters, actually, but the left-handers completely had their way with him.

I immediately went to his heat maps to see if there were any major changes. There really weren’t, at least nothing so dramatic to suggest that he was doing something completely different. He did a slightly better job of staying away from lefties in 2013, but was nearly identical in 2012. There’s just not enough here to explain his 70-ish point wOBA spike against lefties. 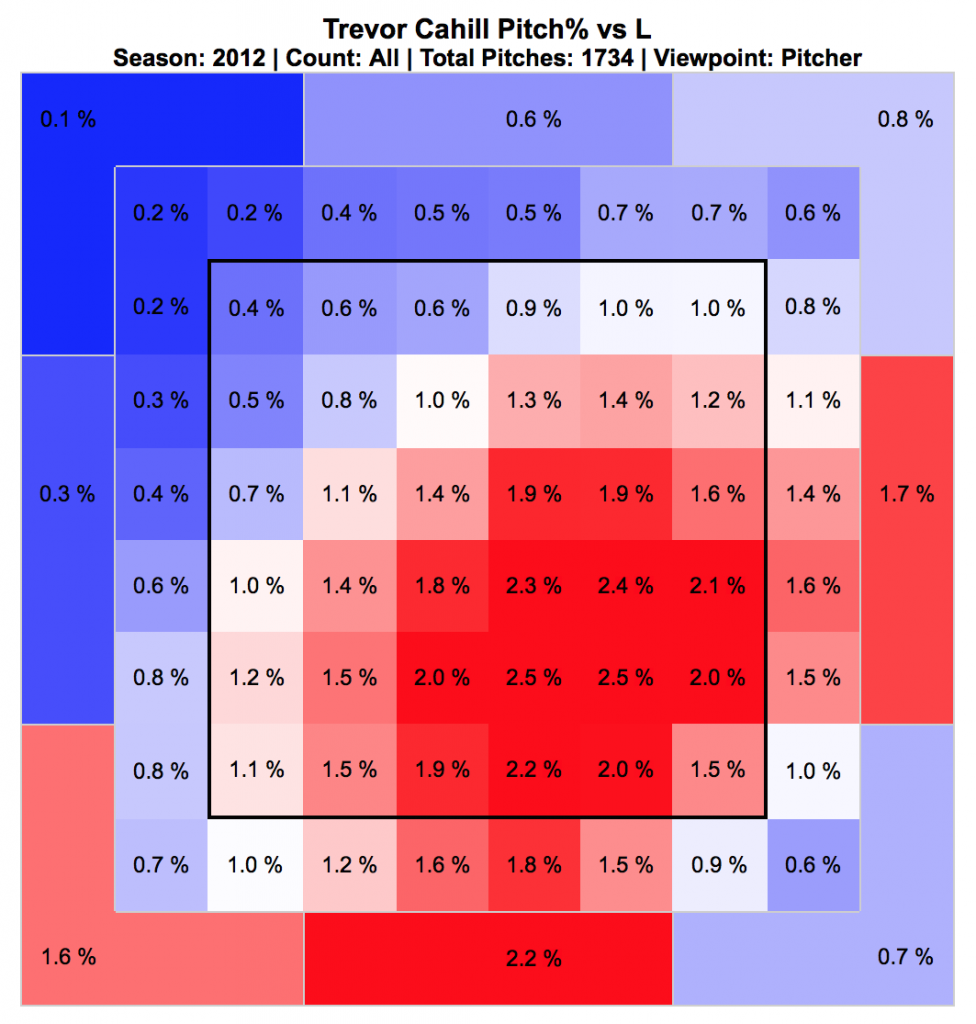 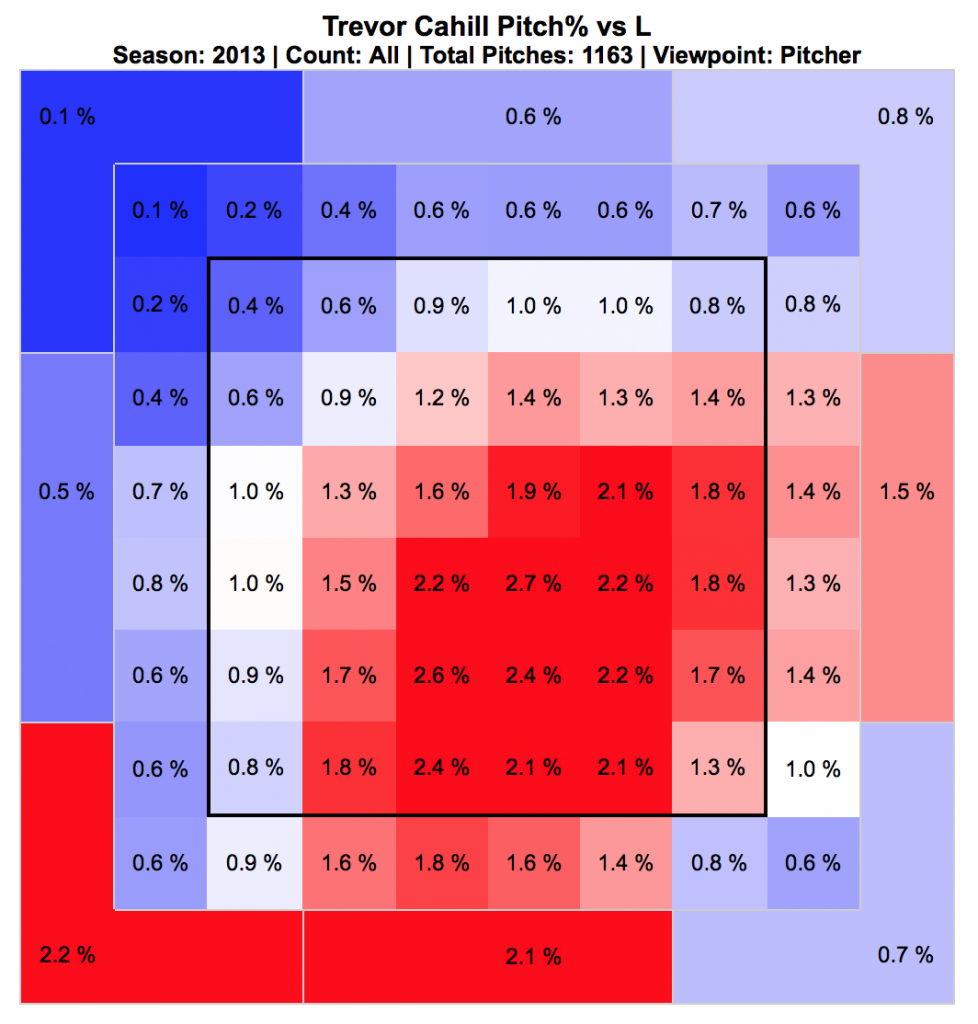 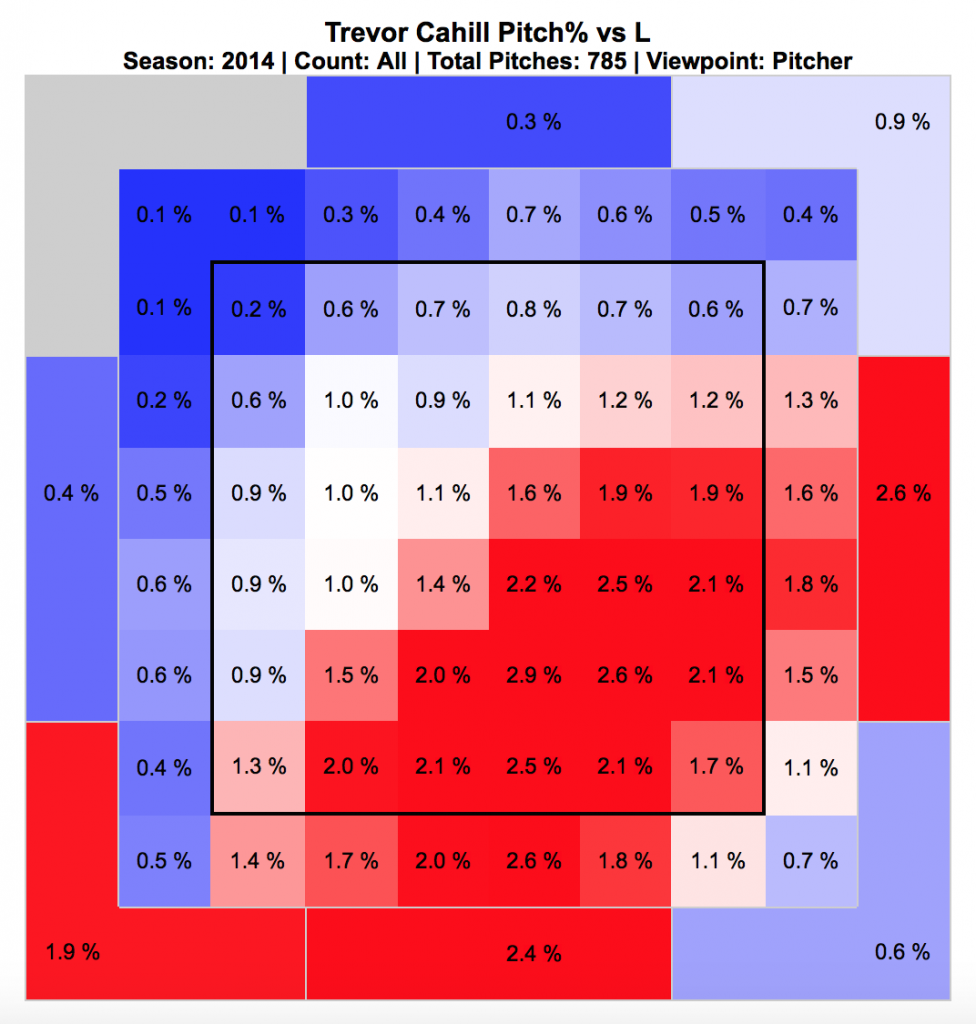 But I got to thinking about something else: what pitch do pitchers usually rely on to dispatch opposite-handed hitters? They need something that breaks away from the hitter, meaning for Cahill that the pitch would need to have arm-side run. His slider moves towards left-handed batters, and his curve does a little bit, too. But his changeup, just like nearly all changeups has a bit of fade as it falls away from opposite-handed hitters. This explains why elite changeup pitchers usually have the lowest platoon splits; they’re able to neutralize the hitters that typically would have the greatest advantage over them.

So how was Trevor Cahill’s changeup in 2014. Not good, to be honest. It lost some movement even though he wasn’t necessarily throwing it harder, but the real problem came when he tried to throw it for strikes. 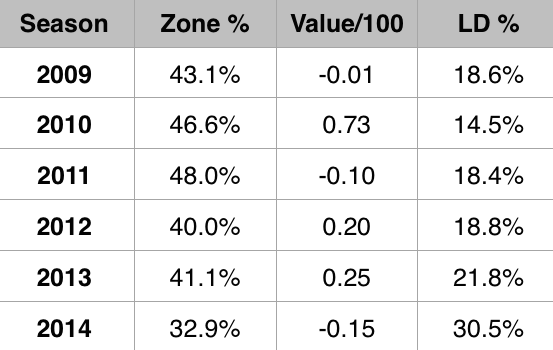 He struggled to hit the zone with the pitch at a rate that was downright shocking. If he couldn’t throw it for strikes, it wasn’t likely to be considered a true threat. When he did get it close enough to the strike zone for hitters to make contact, they hit line drives at an astonishing rate, and given that we know how line drives end up hits over 70% of the time, it’s no wonder the pitch graded out with a negative value. Since pitch sequencing is a very real thing, losing one weapon likely put additional stress on the rest of his arsenal. That’s not good for a guy who couldn’t consistently command his sinker, elevating the need for him to showcase strong breaking pitches (which he actually did).

I guess the takeaway here is that Trevor Cahill probably was somewhat unlucky in 2014. But we know that luck doesn’t always exist in a vacuum. Sometimes a pitcher makes his luck, be it through losing fastball velocity, command in general, or losing an important pitch in his arsenal. The ripple effects are felt throughout the repertoire given that a guy like Trevor Cahill only really has four options to work with. If one of those four goes away almost entirely, well, he becomes more predictable. Mix that in with poor sinker command I think we can see a reason for his luck changing.

At the root of the problem, there’s a blend of two things in my mind: some random variance and a pitcher with a diminishing arsenal. Hopefully some adjustments to his mechanics will help him find his rhythm. If they don’t, the Diamondbacks are likely stuck with a $12 million reliever for 2015. If they do help him, then maybe they have a valuable trade asset on their hands. There’s a lot riding on him finding his changeup again, even if his sinker command remains touch-and-go.

*All stats and heat maps via FanGraphs

15 Responses to An Alternative Answer to Trevor Cahill