Having too many starting-caliber players is a good problem to have — especially in the outfield. This time last year, the four-way traffic jam of Yasiel Puig, Carl Crawford, Matt Kemp and Andre Ethier was a well-publicized example, especially since the team had one of the best “fourth” outfielders in baseball already in Scott Van Slyke. As a group, the five ended up contributing 12.8 WAR to the Dodger cause, ending about 10 wins ahead of the D-backs crew. It wasn’t pretty and it cost $59.2M in 2014 salary to pull it off, but it’s hard to say it didn’t work.

It’s never going to make sense for the D-backs to try this “Damn Yankees” approach to outfield-building, TV deal or no TV deal. But spending money isn’t the only way to do it; the point is that having more starting-caliber players than starting-equivalent spots can make some sense. Talent may be “wasted” in the transfer, but if you throw platoons and defensive replacements into the mix — and provide a nice way to give players days off when that would be particularly helpful (even if it’s “too many” overall), the total is greater than the sum of outfield parts. It helps if players aren’t carbon copies of each other. Assuming all of that, the numbers work.

There’s that human element, as well. I don’t know if in general, players respond to day-by-day competition like that by being better, or if trying to constantly earn playing time causes some to press and be worse. I’d guess that there are some players in each category. At this point, the D-backs better hope they have a boatload of the former.

Yasmany Tomas is with the team. As Nick Piecoro observed, there isn’t a lot of playing time to be had on the major league roster — there was no need for a 13th pitcher, and the only other options among position players on the 40-man were Brandon Drury and Socrates Brito. Drury was effectively off limits — he’s being counted on as a piece of the 2016 puzzle, and the second base and third base pictures are even more complicated than the outfield. Brito might have been a decent option, except that he’s slated to get as much as a full year this season at Double-A Mobile, and he bats left-handed. The only way to get an extra right-handed bat in the mix was to bring up Tomas, or to add another hitter to the 40-man (probably Nick Evans) by transferring someone to the 60-Day DL or outrighting/releasing/designating for assignment a pitcher that the team would not want to lose.

So it’s Tomas, to take on a pinch hitting role — in the Piecoro piece, he quotes GM Dave Stewart as having that expectation. On Sunday, Jeff and I noted on Episode 23 of The Pool Shot that Laird’s then-lingering back injury meant that the team had no right-handed pinch hitter available on days when the team faced a LHP starter and players like Aaron Hill, A.J. Pollock and Mark Trumbo were already in the lineup. This was because the team really couldn’t burn Jordan Pacheco the same way they could if he wasn’t the only backup catcher. I don’t think either of us dreamed that Tomas would take over those duties, at least not so soon.

Consider the tradeoff. This pinch-hitting role could have been filled by Nick Evans — even on a semi-permanent basis — if Matt Stites or Patrick Corbin were moved from the 15-Day DL to the 60-Day DL. It would be possible to do that, because the 40-man is currently full. In Piecoro’s piece, Stewart stated that they think of Stites as almost or imminently ready. Ok. He’s probably not the next man in line for a bullpen spot even if one got free, but there’s a reason to not transfer him to the 60-Day. But what about Patrick Corbin? When a player gets transferred from the 15-Day to the 60-Day, the time spent on the 15-Day does count. In Piecoro’s piece, Stewart noted that they wanted to be on track for Corbin to pitch at the end of May if he were able. Since his 15-Day stint officially started on March 27, he’d be in line to return on May 26 even if he were moved to the 60-Day. It seems like if he were going to be ready to pitch in MLB games before that, it’d probably only be a matter of a few days. That’s not a particularly high cost.

It seems, then, that either the team genuinely believes that some major league time as a pinch hitter wouldn’t hurt Tomas in the big picture — or they don’t care a whole lot. If it’s the latter, then things have changed dramatically in the last couple of months. We don’t yet know what this will look like, but Gerald Laird won’t be eligible to come off the 15-Day until Friday, April 24th. This could definitely be just that short-term, and if there is a long-term injury between now and then — some reason to put a current player on the 60-Day DL — we could see Tomas switched out for Evans, or for another catcher like Blake Lalli. If it’s for a week or ten days, the Tomas callup could be what it appears to be, exactly at face value: a low-pressure taste of the majors, covering the roster in a useful way without setting Tomas back much if at all. If it’s for much longer than that (maybe even two weeks?), we’ll have to start wondering if the organization has changed its evaluation of Tomas, either for the worse or for the better.

Combined, the five Dodgers outfielders from that 2014 quintet played in 631 games — almost 150 more than you’d expect, with no substitutions. With 486 games’ worth of playing time available in the outfield, it’s a minor miracle that the Dodgers ceded just 33 games and 91 PA to outfielders other than that top five. 631 games is probably the upper bound for a group of five outfielders, factoring in a nagging injury or two and a single real DL stint. That’s what we’re looking at. Mid-game substitutions and pinch hitting spots make up that gap between 486 and 631 games, and so while Puig and Kemp did not see their playing time reduced in a meaningful way, the five outfielders averaged 126 games and 447 PA.

Theoretically, you can get all five of the D-backs’ current outfielders about 450 PA by the end of the season. When we looked at the pre-Tomas outfield’s moving parts last week, I think my expectation was that if no one were injured, A.J. Pollock and Mark Trumbo would probably still threaten the 600 PA plateau, with David Peralta starting about 60% of games and pinch hitting (about 400 PA) and Ender Inciarte still ending up in the 550 PA range. That’s a 2,150 PA total, about 80 PA shy of the Dodgers quintet from last year. If Tomas is on the roster short term, we’re mostly talking about that cushion, with Tomas grabbing a few pinch hitting PA that probably wouldn’t have gone to any of the other OFs anyway, and maybe stealing a start or two that doesn’t add up to much in the big picture. But if Tomas hangs on the roster, we could see that shake out in one of two ways (or somewhere in between).

1. Tomas remains the part-time player we’re told he is right now. Over the rest of the season, we’d expect him to pick up maybe one start per week (call it 25), and add to the 100 or so PA from that an additional 75 or so from pinch hitting. Peralta’s playing time really doesn’t get reduced, and he’d hang at just under 400 PA, or that kind of pace. Pollock could slip a little below 600 PA, ceding at least one start per week to Inciarte. I do think Trumbo would probably get more breaks than Pollock, maybe dropping him down to 550 PA. And it’s Inciarte that probably feels the most pain, starting just three games a week instead of four but still entering 90% of the games in which he doesn’t. We could see Inciarte down as low as 450 PA in this scenario.

2. Tomas works his way into the playing time mix. Here, suddenly, Peralta does see his time reduced — you can’t start Peralta for almost every game started by a RHP and still increase Tomas’s playing time. But even if Peralta drops to 300 PA, Pollock slips only to 550 PA, Trumbo to 550 PA, and the rosiest of readings here would have Inciarte at no more than 400 PA. Again, this is all if none of these guys get stung by some kind of real injury, which is highly unlikely. You could probably carve out 350-400 PA (or, that kind of pace starting at the point where this goes into effect), but Tomas would still be a half-time player, at best. Unless…

There’s still third base. It doesn’t really matter whether it would be Tomas or Trumbo manning first base if Goldy missed some time — it all comes out of the same pool of plate appearances. But third base has its own playing time pool, currently shared by Jake Lamb (he of the .409 batting average right now…) and Aaron Hill. I don’t think Lamb should be losing PA against LHP, and that’s not just my bias talking, but theoretically Tomas could take over the Hill role in that picture — and that could mean another 100-150 PA.

In a fictional world with no injuries this year, then, here’s how the playing time may shake out, based on a minimum for Tomas (#1 above) and a maximum (#2 + 3B). 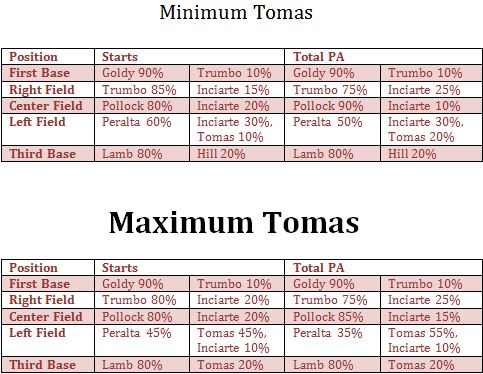 None of this is likely to come to pass, at least not for very long — chances are pretty good that someone will have an injury, at least of the two-week variety, and the club can simply close ranks and keep moving. That alone makes it a significant benefit to have too many starting players — we’re probably not going to see the likes of Roger Kieschnick end up with outfield at bats, barring some significant bad luck with injuries. For the time being, however, and for as long as the picture remains this crowded — either Tomas really does ride the pine for most of most games, or things just went from tricky but complicated in a good way to tricky and complicated in a more problematic way.