With a grand total of 7.1 innings pitched since June of 2012, Daniel Hudson does not have a large body of work in his current incarnation out of the bullpen. But even if there isn’t enough to do much with Hudson’s results — there is some clear evidence that he’s going about his business very differently. Whether it’s sustainable is a question we’ll have to defer, because it’s just too damned unusual — but it certainly seems to be working thus far. As a relief pitcher, Hudson has been doing some things we might have expected, but he’s been attacking hitters in a much different way, as well. Sample size caveats apply, but what we’re talking about here is what he’s done — not what we’re sure he can or will keep doing.

Based on how Brooks Baseball calculates release speed (rather than how MLB reports it, from five feet in front of the mound), Hudson averaged between 93.22 mph and 94.06 mph as a starter between 2010 and 2012, year by year. In our small samples from 2014 and 2015, however, we’ve seen his fastballs look a little different: 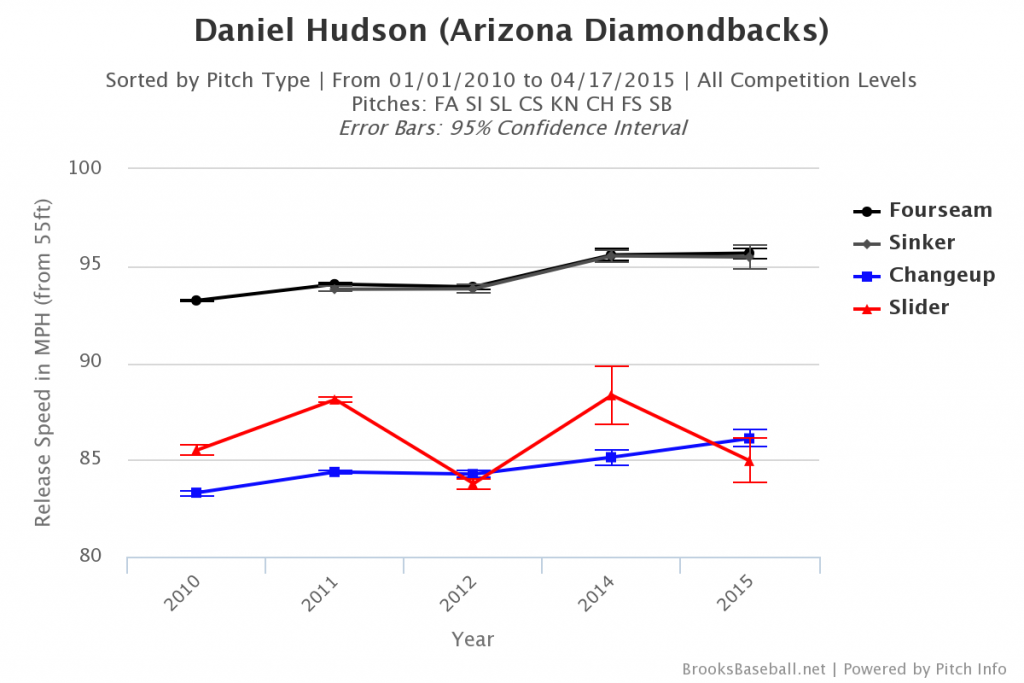 This is not the result of a cleaner elbow; this is about the short stints that come in relief. Hudson always had this gear — if we look at max velocity instead of average velocity, we see basically a flat line. Hudson has always been able to hump things up to the 96-97 mph range (again, per the Brooks way of calculating speed), it’s just that he hasn’t sat at above 95 mph as a starter, but more like 93 mph.

The velocity information is important, but maybe not all that remarkable. Hudson appears to have also tweaked (or untweaked) his repertoire, which I’d put in the very same category. Let’s get a handle on that, and then we’ll get to the good stuff.

1. Hudson was a three pitch pitcher when he first started: four seam, slider, change. He had used a curve in the minors and threw a few in a majors, but quickly canned it. The slider was a 10 percenter, the change was thrown about as often as what is generally seen as the safe maximum: 20% or so. Hudson rode the four seam hard, throwing it about two thirds of the time.

2. In 2011, Huddy started experimenting with a sinker, mixing it in about 5% of the time all year. He picked the four seam’s pocket to do it, also ramping up his slider usage a bit that way.

The pre-surgery Hudson — Hudson 3.0 — came at you with three fastballs that came in at roughly the same velocity. That sounds horrifying for hitters, and maybe it was — but in those 45.1 innings, the results didn’t match that expectation. When his elbow shut him down, Hudson sported a 7.35 ERA. His above average control was still there, and he had a respectable strikeout rate, but he was getting hammered. Even over just 45.1 innings, a .368 BABIP is almost impossibly bad. The sinker was mostly to blame (.714 slugging against), but the cutter did him no favors (.571 SLG) and whereas in his previous two years the four seam had a very good slugging against in the high 300s, the increased use of the other fastballs did not help — his four seam had a slugging against mark of .571.

The main takeaways here are that (1) Hudson has been willing to change his approach even in the face of success; (2) use of a cutter precipitated his injury; (3) Hudson’s success is most closely linked to his four seam; and (4) even in the face of some significant tinkering, Hudson seems to have thought that he had figured out the right mix of sliders and changeups.

Hudson threw a weird number of sinkers in his brief return last year, but basically, he’s gone back to Hudson 2.0 in terms of pitch mix. Some sinkers, the same locked-in usage of sliders and changeups, and a heaping helping of four seam fastballs. That’s where we probably would go if we were in Hudson’s position: the thing that worked really well that was the thing before the thing that didn’t work well right before his injury. Completely reasonable.

Hudson 4.0 is different because of this velocity uptick. But, either because of that uptick or because he’s just not fucking around anymore, he’s also pitching differently thus far.

Huddy is taking a page from another famous Dan and how he dealt with a shitstorm after it disabled him:

Come and get me. After throwing in the zone just 43%-44% of the time in 2011 and 2012, Hudson has pitched in the zone 53%-54% of the time, which is a lot higher than it sounds. It’s more extreme so far this year, in that Hudson has decided to own hitters at the beginning of at bats. Despite sitting in the mid to high 50s as a starter in terms of First Strike Percentage, so far this season, Hudson is over 70%. In 17 of the 19 plate appearances so far this year, he’s started with his four seam and gotten a called strike or whiff more than half the time.

Like most pitchers, Hudson enjoyed a lot of his success in the past outside the zone. That’s where strikeouts come from, and so it shouldn’t surprise you that Hudson has had just 1 strikeout so far this year. The nice tradeoff is that he’s walked nobody (and has walked nobody since 2012). But the really fun part: he’s still not getting hit.

We saw a kernel of this last year. In a GIF-heavy breakdown of Hudson’s first appearance after his Tommy Johns, he was all over the zone — not that you could tell by hitters’ reactions. In particular, three different hitters flinched embarrassingly on changeups for called strikes, the kind of thing that might get you a flick in the face in the schoolyard. He absolutely did not look like he still had some things to figure out — he absolutely did look like he was confusing as all hell.

Just three hits ceded thus far, and Hudson is walking around with a .176 batting average against. Pitching out of the zone so infrequently really shouldn’t work, and ERA estimators like SIERA (4.47) and xFIP (4.27) are alarming or alarmist. But Hudson doesn’t care. He’s back on a mound, he’s throwing 97 mph, he’s daring you to beat him and he’s eating you alive.

Watching what happens next with Hudson is going to be fascinating, because if he keeps this up and it keeps working, he’s a unicorn — and if it doesn’t, the adjustments themselves are going to be interesting as all hell. Hudson has the stuff and the finesse to switch approaches or double down, and he may need to if he is moved into a multi-inning role, which is probably where he belonged to start the season. Jeff and I were talking before the game yesterday: the D-backs probably can’t keep throwing him like this, and as Jeff put it, he’s either going to start pitching in longer stints, or pitching more often (but not both). Either way, it’s still unlikely he’ll ever throw in back to back games this year.

Since it’s been cyclical, you can feel Hudson’s appearances coming. On the third day after an appearance, you can just see those clouds gathering on the horizon, and I am flying high on that kind of anticipation because Huddy doesn’t disappoint. Daniel Hudson isn’t afraid of the storm. Daniel Hudson is the storm.