Does Shuffling the D-backs Lineup Matter?

Messing with a major league lineup is one way to get everybody’s attention. It always seems to stoke the fire and raise a bunch of banter. Sometimes that discussion is positive, but usually it’s not since the original lineup is thought to be the one the team should be using. A departure from this seems like a step backwards, because if you had to alter the lineup in the first place, it more or less signals that you had been doing it wrong in the past. Managers don’t like to look like they’re doing it wrong, ever. So unless a guys is slumping and gets moved down, there’s often no real change to the lineup.

But Chip Hale shook things up last week when Mark Trumbo was moved to the number two slot on the lineup card. I think it’s safe to say that no one saw that coming, especially since it had never happened before. Ever.

Mark Trumbo batting second is an affront to something.

Sure, using Chris Owings in that spot wasn’t working out, but A.J. Pollock had been just fine there. Instead, Hale flipped Trumbo and Pollock, batting A.J. fourth, something he had never done in his career, even dating back to his college days at Notre Dame. And Hale didn’t just do this against lefties, he did it primarily against right-handed pitchers. In the four games (through May 11th) that Trumbo batted second, he faced Tyler Matzek, Odrisamer Despaigne, James Shields and Andrew Cashner. Only Matzek is left-handed. So clearly this wasn’t a matchups thing, it was a lineups thing. Then Trumbo went yard and it was really easy to claim that he liked hitting second. Because Mark Trumbo hitting a home run means he likes his lineup spot, apparently.

Now, I’m of the belief that Mark Trumbo doesn’t really care where he’s hitting once he steps into the box. My guess is that as soon as he leaves the dugout for the on-deck circle, he’s getting reads on the pitcher and once he’s at the plate, he’s going over the scouting report and trying to get himself a good pitch to hit. But the move to the second spot in the lineup, many claimed, should lead to more good pitches to hit for Mark. He likes fastballs and as the traditional adage goes, the number two hitter should get a lot of those if the fast guy at the top of the order gets on base (to prevent him from stealing). Add the notion that Trumbo should get a lot of pitches in the zone because Paul Goldschmidt is “protecting” him and we get a very old-school theory: Mark Trumbo will get a lot of fastballs over the plate because he’s batting second.

Now, don’t get me wrong. I really like the idea of Mark Trumbo getting a lot of fastballs over the plate. That sounds like a lot of extra-base hits to me. But it hinges on the concept that the pitcher is going to take Trumbo’s lineup spot into consideration when throwing pitches to him. And as has been discovered before, that’s just not the case. Pitchers are focused on getting the batter at the plate out and, if necessary, holding a runner on base. That’s it. It’s a nice idea that Paul Goldschmidt in the on-deck circle will make the pitcher want to get Trumbo out more than ever, but that factor is so small, if it even exists in the first place, it’s completely negligible.

Let’s observe some observable things, shall we? First, have the idea that Mark Trumbo will get more fastballs in the two-hole since there’s sometimes a speedy runner (Ender Inicarte and A.J. Pollock, in these instances) on base. That took place exactly eight times in 17 plate appearances, or 47% of the time. That’s good frequency if having a fast runner on base is going to result in more fastballs. But it didn’t, actually.

Rather than getting more fastballs, he actually got fewer of them. It’s not fewer by a wide margin, and considering that we’re talking about only his first four games batting second, it’s probably fair to say that he got “about the same number of fastballs.” But he didn’t get more fastballs, and he especially didn’t more fastballs by a wild margin as the old logic would have you believe. Instead, with a runner on base, they threw him more sliders and more changeups, pitches Trumbo doesn’t usually handle very well. They didn’t want him to get a hit with a runner on base, would be my guess, and so they gave him pitches doesn’t usually hit. That kind of logic makes a lot more sense to me than assuming he’ll get more fastballs because it makes far fewer assumptions. Assumptions are dangerous and avoiding them is a good idea.

Speaking of assumptions, the second major flaw in the traditional reasoning is that Mark Trumbo will get more strikes with Paul Goldschimdt batting behind him in the lineup. This is the “protection” idea, one that’s been more or less debunked a number of times, but still persists. Let’s just check again anyways since we’re here and all. Did Mark Trumbo get more strikes?

Negative. He did not get more strikes. In fact, he got more balls because, well, shoot, there are really only two options aren’t there? But yeah, he got more balls in his four games as a number two hitter than he did previously when batting either fourth or fifth. If I had to posit a theory here, I’d guess it was because he saw more secondary pitches and those are strikes less often. Those two things, secondary pitches and balls, kind of go hand-in-hand, which is why when a pitcher really needs to throw a strike, he throws a fastball the vast majority of the time.

To recap, Mark Trumbo did not get more fastballs or more strikes in the number two spot. That doesn’t mean the strategy was a failure. Hell, we don’t even know exactly why Chip Hale wrote him in there in the first place. Maybe he did for reasons other than the traditional ones that we’ve just got through poking some holes in. But it would stand to reason that he did it to score more runs, because why else would you ever do anything to a baseball lineup? The damn thing only has one function.

And guess what? Even without more fastballs or strikes to Trumbo, more runs were scored. The team notched 31 runs in the four games that Trumbo occupied the two spot, an average of 7.75 runs per game. In the games where he’s batted anywhere else (or not played, through May 11th) the team has averaged 4.07 runs per game. Damn, that must be working!

But, again: assumptions. Correlation does not equal causation and we’d be incredibly foolish to pin an extra 3.67 runs per game on swapping two batters in the lineup. Hell, if life were that easy, everyone would score like 600 runs per game. And really, we already know that lineups don’t matter all that much when it comes to run-scoring. Billy Martin understood this 42 years ago when he pulled a lineup out of a hat and scored more runs, which ended up winning the team the division title. Sure, there are some guidelines to follow, but in the end, the differences are much more related to individual batter performance than they are to where they hit in the lineup.

That said, maybe it’s worth messing around and creating a couple of preferred lineups based on what we do know. The essential guidelines, based on The Book by Tango et al. suggest that you should put your three best hitters in the first, second and fourth slots in the lineup. Your next two best hitters should bat in the third and fifth slots, bat the pitcher eighth and make the rest work. If we did that, we should get something like this, based on the handedness of the pitcher. 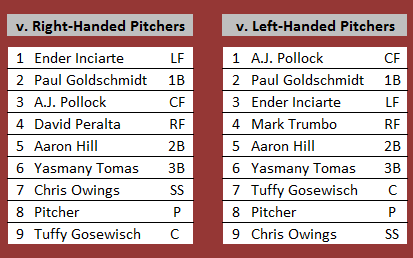 This would change when Jake Lamb comes back as that will shuffle the roster around, and it plays on a platoon of David Peralta and Mark Trumbo. There’s not much here that’s really surprising, except maybe Ender in the three spot against lefties. But he’s justified that by being good against them considering he’s left-handed himself. And if you want to make an adjustment or two, especially in the bottom half of the lineup, I won’t quibble, because it doesn’t really matter (recommended). Jordan Pacheco gets left out for defensive reasons, but he’s good against lefties. Nick Ahmed and Cliff Pennington are bench bats at present. Otherwise, everyone plays.

And batting Goldschmidt second is really the key here. It should get him an extra 20+ at-bats over the course of the season, something Arizona should strive for. Getting more AB’s for your best hitter is always a good idea. And since there’s only one instance in the game where the lineup is guaranteed to come to the plate in order, putting him second isn’t crazy at all, especially with the pitcher hitting 8th and the chance to get another hitter on base ahead of the “leadoff man.”

Either way, changing this stuff around will make minimal effects anyways. You’re looking at a best-case scenario of something like maybe 15 runs added over the course of the season. With about 130 games left this season, that’s .115 runs added per game, something that’s so small we’d essentially never notice. The timing of those runs is the key, and there’s just no way to time them optimally. Runs distribution is something that just cannot be predicted, but you can arrange your lineup in a way to give you the best chance to produce them in the first place. That’s really all a manager can do.

So shuffle it, don’t shuffle it, I don’t care. The team isn’t scoring more runs because Trumbo is in the two hole. They’re scoring more runs because he hit two bombs the other night, which came down to a hung changeup from Stephen Strasburg and a good swing on a bad pitch from a bad reliever in Sammy Solis. Those thing can happen anywhere in the lineup. Feel free to leave your “best lineup” in the comments below, just please do me the favor of acknowledging the limited power of organizing a particular lineup in the first place.

5 Responses to Does Shuffling the D-backs Lineup Matter?