Out of Left Field: Platoon Trumbo and Peralta

The Diamondbacks’ outfield is set. Now that we know that Yasmany Tomas is almost surely destined for the minors and that he’s going to continue working at third base, the pieces are in place. A.J. Pollock is a stone-cold lock for every day duties in center field. Cody Ross is going to get some starts, but isn’t a major piece of the puzzle. Ender Inciarte is should play all over the place as a spot starter and defensive replacement, something he really excels at and is particularly well-suited for. Mark Trumbo and David Peralta will presumably be flanking Pollock in the corners regularly. And while that set up seems to be essentially settled, there is an alternative: platoon them and create an offensive monster.

While the D-backs are projected to struggle to score runs, there’s not a lot they can do about it externally. There’s no reason to think they’ll make any kind of move to upgrade the offense and it appears the team is maxed out financially. Because of these limitations, creating extra offense internally seems to be the best, most feasible alternative. And to do that, the team can opt to swap out plate appearances where players are expected to struggle for plate appearances where players are expected to succeed. The best way to do that is to utilize platoons, something manager Chip Hale had plenty of practice with in Oakland.

Both Trumbo and Peralta have showcased severe platoon splits as of late. Single-season splits can be volatile, however, so it’s probably best to take a bit of a larger snapshot to fully measure their production. Below is a table of offensive production versus righties and lefties since 2012 for the entire outfield.

*all offense measured by wRC+ via FanGraphs

We’ll limit the discussion to Trumbo and Peralta for now, keeping the others in mind. Trumbo has struggled against right-handed pitchers in every major league season except 2012 (which is why we’ve looked at more than just one year of data). Peralta was downright terrible against lefties last year and although he went to Venezuela this winter to work on facing lefties, we can’t expect him to become two-and-a-half times betters, something he’d need to do against left-handed pitching to become a balanced player. So we’re left with a guy who should usually face lefties (Trumbo) and a guy who should usually face righties (Peralta). Both have limited defensive upside, but Peralta is clearly better in an outfield corner. Still, both are projected to be everyday players, no matter who’s on the mound.

In 2014, roughly 75% of innings were thrown by right-handed pitchers and 25% by lefties (no one has been able to throw with both hands at the same time yet, but I’m smelling a market inefficiency here). If we were to assume that this was going to continue going forward, that would make it seem like Peralta should start 75% of the time and Trumbo 25% of the time. But you can’t just swap guys out whenever you want when the bullpen comes into play. Therefore, starting a lefty at the plate means he’ll still see about 20% of his plate appearances against same-handed pitching  and and vice versa. So even if the two were platooned, Trumbo would still face some righties and Peralta some lefties. That’s just baseball and the reality of having a 25-man roster.

But even if we were take that into account, you could still create a really good offensive player by platooning the two. If you were to shelter Trumbo from right-handed pitchers and Peralta from lefties, you could conceivably still create a player that produces offense at a far-above league average rate, something in the neighborhood of a 125-130 wRC+. Let’s check in and see who those types of hitters were in 2014. 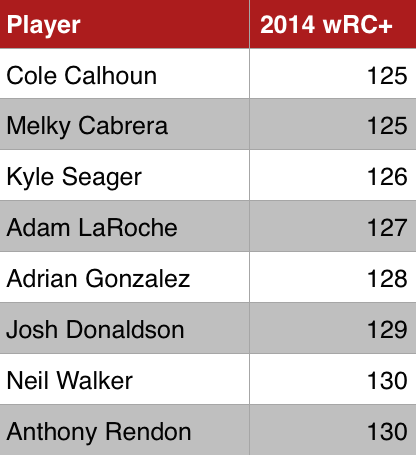 Now, those guys are all top-40 players offensively. In fact, Anthony Rendon checks in at 30th best in baseball last season. As we’ve talked about way too many times before, the D-backs are in need of impact offense. If you could create an offensive player like any of those noted above from two internal candidates, well, that’d be a clear win for the team. This type of player would easily slot as the second-best hitter on the team, a player who’s only eclipsed by Paul Goldschmidt. That’s really good.

There is clearly a tradeoff here, though, and that’s the fact that someone else would need to fill the vacated corner created by this platoon. If Cody Ross were deemed healthy, he could be a really good option a couple days a week when a lefty were on the mound. But the bulk of those starts would go to Ender Inciarte, a player who’s shown no noticeable platoon split and finished 2014 on an offensive high note. The real gain would be saving runs by putting his defense in the field. By swapping Inciarte for Trumbo or Peralta defensively, it’s not unlikely that the team could save something to the magnitude of 1.5-2 wins, depending on how much playing time he was slated to get prior to the aforementioned job-share. Combine that with the added offense by platooning Trumbo and Peralta and maybe you can coax an extra two or three wins out of this team just by optimizing the pieces that are already in place.

Now, I don’t for a second think this has any chance of happening. Not in reality. The team is too invested in Mark Trumbo after losing to him in arbitration (they would have been too invested had he accepted their initial offer, most likely) and they may in still be looking for suitors here in a few months. They’d surely like to see him prove that he’s healthy and recover some of his value. Plus they kinda traded a very productive player in Adam Eaton and a young and still somewhat promising pitcher in Tyler Skaggs for him not too long ago. I’m sure they’d like to see him do something of value while they have him, if for no other reason other than to save some face.

There’s also a matter of trusting the limited track records of David Peralta and Ender Inciarte. For the former, he’s only been a hitter for two years although he’s performed at an above average clip that entire time. There may be some growth left, especially against lefties and the team could consider exposing him to same-handed pitching in an attempt to provide those growth opportunities. Whether or not he’s able to adjust is another matter altogether. For Inciarte, there are the questions of how much to trust a single season’s worth of defensive numbers and whether or not his hot final few months at the plate are sustainable. The outcomes that would make this platoon situation pay off are not guarantees by any means.

Still, this isn’t the worst idea possible. In fact, I’d argue that it makes a boatload of sense if the team is trying to squeeze every last win possible out of this squad. There are surely other factors at play, however, and they’ll likely get in the way of this idea, at least to begin the 2015 campaign. If, say, neither Peralta or Trumbo have shown any growth against same-handed pitching and Inciarte is playing well when given the chance, then this could get a shot later in the season. Even then, while other teams are utilizing platoons to build winning teams on shoestring budgets, this idea may just be too far out there for the Diamondbacks to consider. And that’s too bad, because it has the chance to make the team measurably better.

2 Responses to Out of Left Field: Platoon Trumbo and Peralta