Double Plus: The Improving Value of Socrates Low and Away Explains Some D-backs’ Seasons at the Plate

The gun may have been a little hot on September 1 in Colorado (all five of the D-backs’ top pitches by speed were thrown that day), but that’s when Rubby De La Rosa fired the season’s speedingest bullet. It finished an at bat, after Christian Adames had fouled off five other pitches — and we can only guess how Adames feels to know just how special the 100.4 mph fastball was that he took off of his shin. I wasn’t able to reach Adames for comment, partly because I’d feel like kind of a jerk, but mostly because I don’t know how. I kind of am a jerk.

There’s only one King of the Fastball this year for the D-backs: Rubby De La Rosa. He’s responsible for 35% of the team’s pitches picked up by PITCHf/x as 95 mph or over this season. Sixteen pitchers have reached that mark, although only eight have done it 50+ times, and only eight have seen at least 10% of their pitches surpass that speed. Among starters, only Robbie Ray (10%) can join RDLR (23%) in terms of how regularly he hits that threshold, although Patrick Corbin and Chase Anderson have each snuck in a few.

As you’d expect, high heat is a reliever story. Evan Marshall and David Hernandez each humped it up there regularly this season 14% of the time, while Enrique Burgos and the long-since-traded J.C. Ramirez each threw 95+ mph 37% of the time. That’s a lot.

Daniel Hudson has thrown 95+ mph, as measured by PITCHf/x, for 48% of his pitches. Considering only 58% of his pitches have been fastballs… that’s kind of messed up. And just like RDLR, he, too, crossed that magic threshold of triple digits per Brooks Baseball, a 100.04 mph fireball on the same day that caused a Kyle Parker whiff. You’ve noticed, I’m sure, that Huddy had seen a pretty steady climb in velocity all season. This is a graph of his average fastball velocity by outing this season, from Brooks, which calculates release speed: 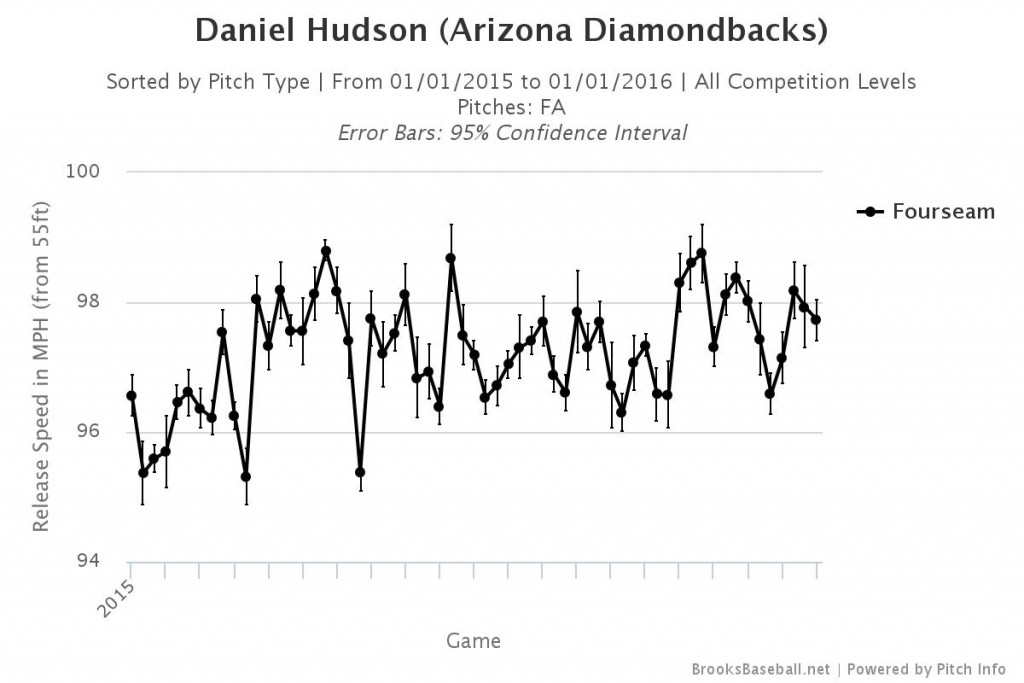 It’s Huddy’s changeup that gives me chills sometimes, but hot damn — that cheese has been under a 24-hr heat lamp. And what’s better — after some disastrous results early this season with no rest (and with way too much rest), the D-backs are experimenting with taking the kid gloves off this month. He pitched thirteen times in September, nearly half of the team’s 27 games — including consecutive days on the 21st and 22nd, and again on the 29th and 30th. I’ve assumed Hudson would be kind of underutilized in a closing role. But in shutting down the Rockies on Wednesday, Hudson repeated that same high heat from the day before — and I don’t think any of us would be unhappy to see that again.

3 Responses to Double Plus: Daniel Hudson and Highest Heat