What’s Yasmany Tomas Worth These Days? Double Plus: Some Final Thoughts on AFL Prospects

Before 2015 became the season of grand experimentation, 2014 was quickly lost, somewhere between Sydney Cricket Grounds and Chase Field. It may not have had the same frenetic roster turnover as 2015, but 2014 was also an information-gathering season. Among the most important of that information: Chase Anderson has a silly-good changeup and major league skills. We were treated to 374 gloriously bewildering changeups of a plus plus variety, and hitters swung and missed a spectacular 22.7% of the time — and since hitters swung at them most of the time, 38.8% of swings on Anderson changeups were whiffs.

We knew that was the key to Anderson’s success, because we watch baseball and few things seemed more simple. Anderson’s other offerings seemed fringy at best. PITCHf/x Pitch Values, which give us a run value for each type of pitch as compared to major league average for those pitches, had Anderson’s four-seam worth -11.3 runs as compared to major league average, -3.3 for his sinker, and a closer-to-average -0.6 for his curve. His change, though, helped close the gap between Anderson and league average; the PITCHf/x Pitch Value for his change was 7.0.

We thought it was worthwhile to experiment with throwing more changeups, because that gap was so wide that he could still be better overall by throwing more changes, even if the effectiveness of the pitch was diminished (depending, of course, on how diminished). On a rate basis — the same PITCHf/x Pitch Values, but per 100 pitches — the gap between Anderson’s change and the average MLB change (1.85 wCH/100) was greater than the gap for his fastballs in the other direction (-1.38 for four-seam, -0.98 for sinker).

The change was good; the rest was not. Anderson ended his 114.1 innings in 2014 with a 4.01 ERA, but with a 3.67 xFIP, which is based mostly on strikeout and walk rates. Anderson was a strikeout pitcher that year, thanks to that change; a 8.27 K/9 is strong for any pitcher, even more so for a starter.

Things didn’t go as well for Anderson in 2015; the 4.30 ERA was not dramatically higher, but it was more than matched by a rise in xFIP. 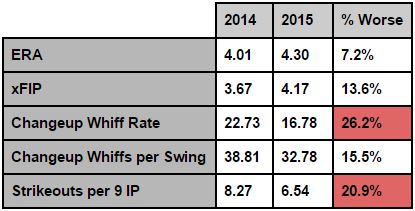 In terms of slugging against, Anderson mostly improved in 2015:

I think, though, that Anderson is a good example of how slugging against can’t always tell us what happened. Anderson did throw changeups more regularly in 2015, but they weren’t hit harder; they were swung at less often. The slugging percentage on Anderson’s sinker was dramatic, but no more dramatic than the slugging against for his four-seam in his better season.

It’s about the strikeouts. A 22.7% whiff rate is excellent, even for a changeup; a 16.8% whiff rate is merely good. The biggest difference was in how often batters tried to hit the changeup. In 2014, batters swung at Anderson’s change 58.6% of the time; in 2015, batters swung at it just 51.2% of the time. Still, that doesn’t account for the fact that batters made contact when they did swing at a higher rate. The plus-plus change that carried Anderson through his part of the 2014 season just wasn’t really there.

So what was different? It wasn’t that the velocity difference was smaller: 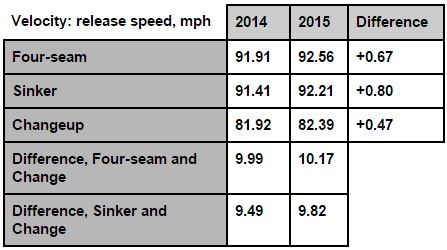 Anderson amped up a bit in 2015, maybe a little surprising given the dominant storyline for the latter half of the season that Anderson was fatigued and struggling for that reason. Maybe he was struggling because he wasn’t as fatigued? But at any rate, the increased velocity was matched with some slightly different movement. 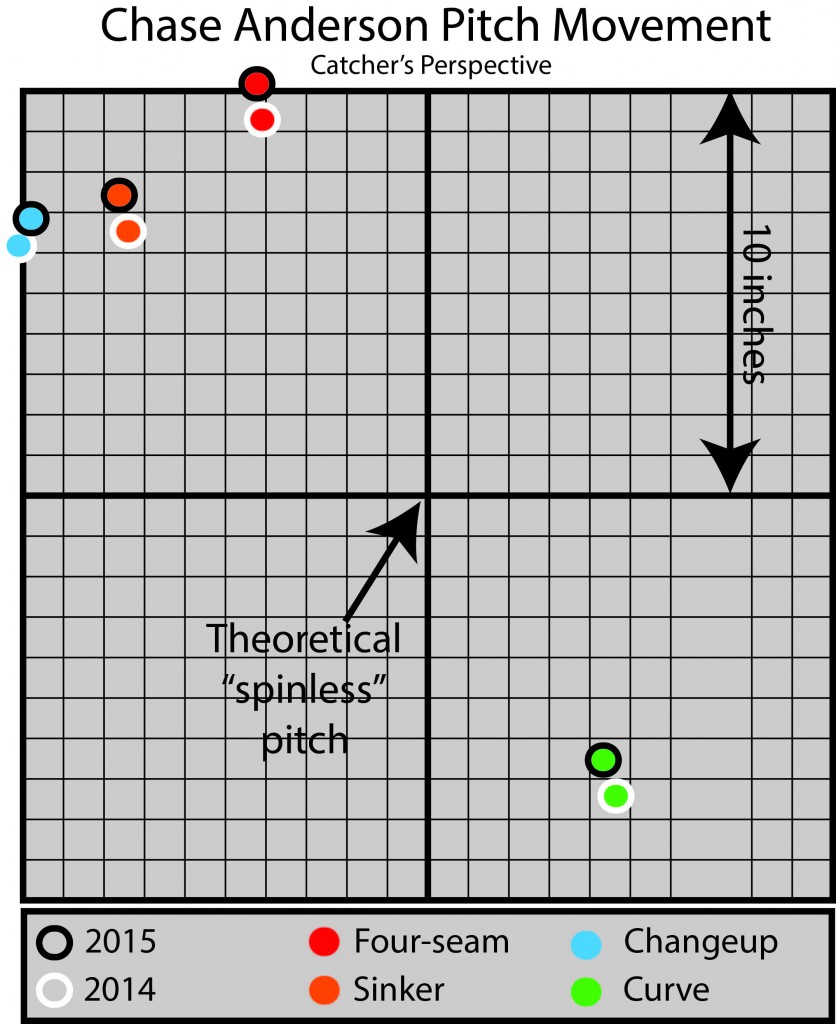 No, the difference in movement isn’t stunning, although it bears note that while the vertical change in movement was pretty consistent pitch to pitch, the changeup and fastballs moved a bit toward each other horizontally. Still not a dramatic difference. 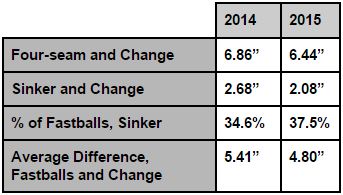 Could it be that a handful of modest changes are collectively responsible for such a big drop in strikeout rate for Anderson? It looks like it might be that way.