40-Man Decisions and Why the D-backs Protected A.J. Schugel

A year after doing an excellent job protecting its players from the Rule 5 draft, the D-backs had their work cut out for them this season. After cutting Jamie Romak, trading for Chris Herrmann and trading Jeremy Hellickson away, the team had just two spots to use if it kept everyone else on the 40 man roster. All that remained of the “soft” part of the 40-man were Aaron Hill and seven fringy pitchers: A.J. Schugel, Dominic Leone, Matt Stites, Allen Webster, and three lefty relievers in Matt Reynolds, Keith Hessler, and Will Locante.

The top candidates to be protected from the Rule 5 draft by getting added to the 40-man were probably Gabby Guerrero and Jake Barrett, and in a way, you could think of the D-backs’ transactions on Friday as dedicating the two available spots to those two players. From our look ahead at the 40-man decisions to come by the Rule 5 roster deadline on November 20th, there were others in the Kenny Loggins Division:

The other guys on this list either show some real MLB promise (which is not to say, “high”), but some were more likely to be picked in December by another team. Guerrero and Barrett might have been the only guys with enough talent for another organization to carry them all season, but there are a few others that could be hidden more easily: Evan Marzilli, who has a chance to stick as a 5th outfielder next year if selected in the Rule 5 draft, and Zach Borenstein, who might hit enough to be helpful in a bench role for a team that plans to carry two other outfielders capable of playing center. Kaleb Fleck is another interesting name for the Rule 5 draft; as Jeff noted recently, he was dynamite in 2014 but struggled in 2015, possibly, due to injury. For a team not drafting for need in the Rule 5 (read: most teams), he’s an easy selection, along the lines of the D-backs’ Marcos Mateo pick after the 2013 season. A selecting team could get a good read in March on whether Fleck is back to throwing like he did in 2014.

After #12 Guerrero and #19 Barrett, no one else in the above Danger Zone was on Jeff’s Top 30 Prospects (see links on the right). But when Jeff huddled up with me for that 40-man piece earlier this month, he did flag Matt Koch as a likely draft target. The D-backs knew in August when they extracted Koch from the Mets that they’d need to protect him this winter, and Steamer projects him with a 4.28 ERA as soon as this year; that’s a guy you could hide in a mop-up role in a major league bullpen. In Double-A in 2015, Koch threw about as much as a starter (3.81 ERA) as he did a reliever (2.54 ERA), and while he didn’t look like a strikeout pitcher, even in relief (46 IP, 6.07 K/9), he has the command to keep from unraveling (1.37 BB/9 as a reliever, 2.17 BB/9 as a starter).

The D-backs did protect Koch, gambling that few teams would deem Miller Diaz or J.R. Bradley anywhere close to ready, and knowing that very few teams have ever hidden a second baseman like Sean Jamieson as a Rule 5 pick (I can only recall Dan Uggla, and Uggla started in his selection season). To do that, though, they designated Allen Webster for assignment. That’s a whole different post, and we don’t yet know whether the team will be able to trade Webster to another team, either for an unprotected player (the D-backs can’t add a 40-man guy at this point), or, more likely, for cash considerations as they did with Mike Bolsinger and Charles Brewer a year ago.

Webster was acquired in part because he was already losing luster a year ago, and after worse results in 2015 maybe it’s not too big a surprise that the team would pull the plug. The D-backs can’t have felt like protecting Koch was an absolute must, and so we may be free to read into the team designating him for assignment. Dominic Leone hasn’t yet worn out his welcome, and we can probably say the same for Matt Stites. But what about A.J. Schugel?

The beauty of a group of decisions like the ones the D-backs made leading up to November 20th is that they’re all dependent on each other; you could say that of Koch, Schugel and Webster, it was Webster left as the odd man out. But we can also say that the team picked Schugel over Webster, because technically they did. There’s no way to know for sure without actually testing the market, but I am not feeling all that confident that Webster will net less in trade than Schugel. Maybe we can safely say that it’s a fairly close call, at least. And that’s pretty interesting.

The D-backs front office has already liked “their guys” more than “the other guys” on more than one occasion, most notably in promoting Zack Godley out of nowhere and ahead of other in-house options like Aaron Blair. But Schug_Knight is an old guard pitcher. With a package of Tyler Skaggs and Adam Eaton worth more than Mark Trumbo, and with Eaton worth more than Hector Santiago, the Angels kicked in Schugel in the first Trumbo trade; the White Sox kicked in Brandon Jacobs, who washed out of the organization after the 2014 season.

And Schugel didn’t exactly dominate in 2015 in time split at three levels:

That’s some fantastic Double-A work, all between May 15 and July 22 — Schugel flamed out in five Triple-A starts to begin the year (30 ER) and didn’t inspire much confidence in a 3-inning major league cameo in April. At Double-A, though, Schugel showed something that we also saw with Koch at the same level: control that rates somewhere between “very good” and “excellent.” And Schugel did it almost exclusively as a starter — and his ground ball percentage (50.8% at all levels combined, 52.5% at Double-A) was more than high enough to help him get more than his share of outs on balls hit in play.

And check this out: 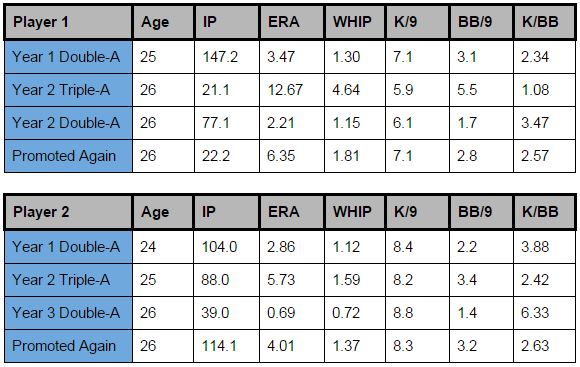 A gross oversimplification? You betcha. And Schugel, player 1, had seen a full season of Double-A ball at the age of 23 in 2012, and had already had an extended taste of Triple-A in 2013 at the age of 24, both stretches with the Angels organization. Still, Player 2 set a template that the D-backs may be thinking about specifically in keeping Schugel in the fold.

You remember Chase Anderson, who benefited from a minor pitching apocalypse that stretched from the Southern and Eastern Hemispheres in March 2014 to Arizona in April 2015. Anderson was nowhere near to being next in line (Archie Bradley made the trip to Australia to pitch in one of the exhibitions, you may recall), but when the pitching was so bad that massive changes were necessary, Anderson was ready to go on May 11 of that year after an absurd six-start performance with Mobile after a full season’s work at Reno necessitated a demotion.

Schugel’s minor league record is not as impressive as Anderson’s in a variety of ways, but Schugel does have something that Anderson doesn’t: a ground ball bent. Re-routing Anderson toward ground balls through use of a sinker did not go so well in 2015. But Schugel doesn’t need to make any changes along those lines; he’s not as GB-leaning as Godley, but Godley’s 2015 was a freak of nurture.

Schugel and Anderson have two other things in common: at least flashes of very good control, and a changeup to beat the band. Our minor league data is nowhere near as granular as what we have for MLB, but Schugel did pitch 9 innings in MLB this season, and that means we can examine his pitches. And as Eno Sarris explored earlier this month, the true (movement and velocity) measure of a changeup is probably not what they look like in a vacuum, but what they look like when compared to the same pitcher’s fastball.

Anderson’s change and fastballs bled toward each other a bit in 2015, as we explored last week. But Anderson still had the 19th-largest gap between change and fastballs by Sarris’s math, which compared gaps in velocity and horizontal and vertical movement and resulted in a single Z-score measurement of difference, essentially an overall standard of deviation. To rank 19th, Anderson enjoyed a 9.9 mph average difference in terms of velocity, 4.3 inches difference in horizontal movement, and 2.2 inches difference in vertical movement. The total Z-score: 2.0.

Sarris measured relievers separately, but Schugel was included in that crew — and he ended 11th among RPs with a 3.1 total Z-score (more variability among relievers, and more relievers). Schugel had an even greater velocity gap — 11.1 mph — and while the difference in horizontal movement was smaller (1.7 inches, to Anderson’s 4.3), the difference in vertical movement was much more pronounced (5.5 inches, to Anderson’s 2.2).

Schugel’s fastball doesn’t have a ton of juice, which is part of why he gets ground balls at a decent clip with that pitch, but even with below-average “rise” on the fastball, he still manages a huge difference in drop on the change (2.3 “rise” on the change, but compared to the fastball, that may look like 5.5 inches of “drop”). Compare Schugel to the 2015 version of Anderson from last week’s post: 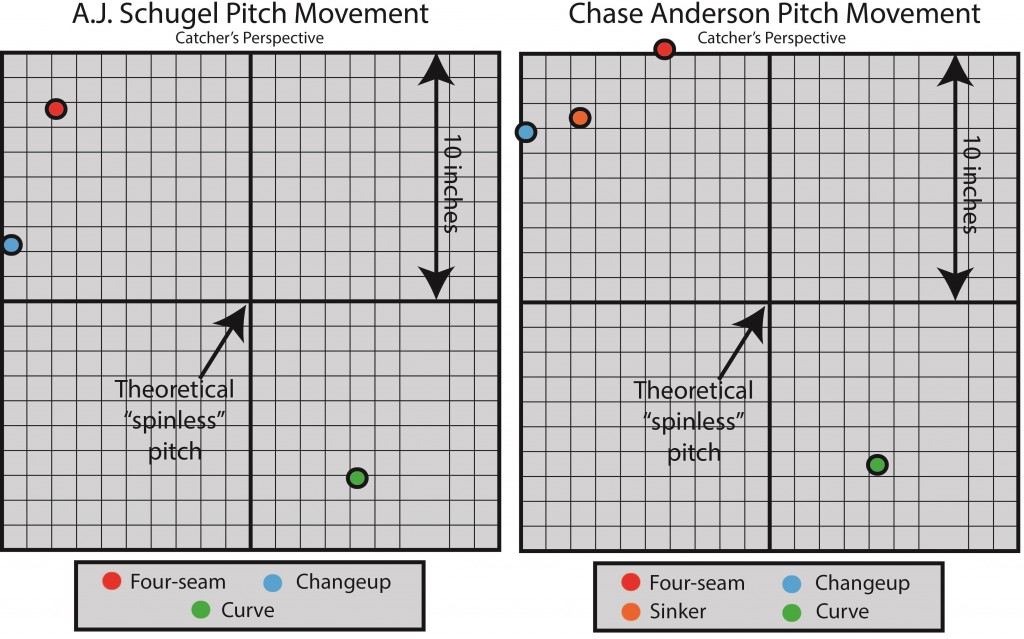 A bat is about three inches or so from top to bottom — three grid blocks above. The change in velocity is the dimension that probably matters most, and yet Schugel’s changeup does seem to leave a lot of air between it and his fastball. Given Schugel’s ground ball tendencies, you have to wonder if that fastball is really a four-seam (and I kind of think it’s not), but if you were going to use Anderson’s sinker as your primary pitch, you’d want Schugel’s changeup, not Anderson’s.

Maybe there really is potential here for a changeup-reliant major league starter, one like Anderson in most respects except for the reliable ground ball tendency that the D-backs front office appears to prize so highly. Maybe it won’t work. But admit it — you’re intrigued enough to keep Schugel rather than Webster.

11 Responses to 40-Man Decisions and Why the D-backs Protected A.J. Schugel