Fastballs and Changeups and Diamondbacks The Unusual Suspects

It seems like every time we’ve delved into lineup topics over the last few years, the question is really about who is batting leadoff. Sure, there was the question about whether to bat Paul Goldschmidt second or fourth instead of third, but we know that the idea of “lineup protection” is probably overblown, and that most lineup questions just don’t matter a whole lot. Nonetheless, Chip Hale still needs to fill out the card for every game. It’s highly visible, and one of the relatively few things that can affect a game that does not have to do with players making plays.

Among lineup questions, the question of who bats leadoff can be among the most important. Flip-flopping hitters who are batting first and second, not so much — but if the leadoff candidates would otherwise be batting most of the way down the order, we might be talking a more-than-50% chance of an extra plate appearance, or an even higher likelihood of facing the opposing starting pitcher one more time. Those things definitely matter, even if the net result is only likely to be one or three runs over the course of a season.

Take 2013 as an example. After a series of injuries to outfielders, Gerardo Parra was pressed into more of a full-time role — and A.J. Pollock was called on to be a starter for the first time, after a cameo the previous season. You’ll remember that they were frequently in the same lineup, especially midseason — but that Kirk Gibson flipped them from top to bottom in the lineup depending on the handedness of the opposing pitcher. The system seemed to work to some small extent; and while the set-up probably had more to do with Parra’s struggles against lefties, it was probably Pollock who derived the biggest benefit.

Thanks in large part to players with very large splits like Nick Ahmed, Welington Castillo and David Peralta, the lineups in 2016 are likely to be variations on two themes, instead of one. At the same time, we don’t have any strict platoons projected this season; Ahmed and Castillo will probably see most of their rest days against RHP starters and Peralta and Jake Lamb are more likely to sit against LHP, but the D-backs are set with seven starting position players. Only second base would likely have no single player taking more than two-thirds of playing time, with some mix of Chris Owings, Brandon Drury and Phil Gosselin manning the position — yet all three of those players bat right-handed, making for similar considerations.

Lineup optimization is almost completely a game of getting your best hitters as many plate appearances as possible. There happen to be exactly three outs in an inning, however, and thanks to how games start, the first spot in the order starts innings a lot more than any other spot. That means that the #3 spot has less importance than it otherwise should; #3 hitters get up in spots where they can do damage frequently, but they’re also the most likely to get to the plate with two outs and no one on base. For those reasons, it’s really spots #1, #4 and #2 that have the biggest effect on scoring runs, with #5 still coming in slightly ahead of #3.

Again, the differences here are tiny. But among spots #1, #4 and #2, you can do a bit more to optimize scoring runs, based on what we know about how often innings start at #1. Of those three hitters, on-base percentage — which you can also think of as “avoiding outs” — is particularly important for #1. Slugging, or just power in general, is particularly important for #4. Unlike the whole business about the #3 hitter not being in one of the best positions to help score runs, these on base and slugging considerations seem intuitive.

But what about platoon splits, and that Parra/Pollock kind of lineup hijacking? We can think of each of these 7 hitters + second basemen as being platoon split versions of themselves, and go from there. Here’s how they look based on Steamer projections of their 2015 Rest of Season splits (which won’t necessarily match 2016 projections), using Chris Owings as the second base stand-in: 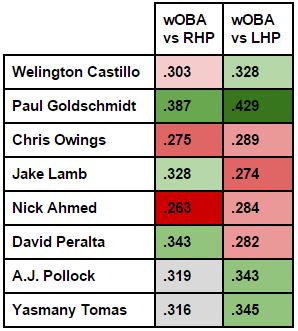 This gives us a pretty great idea of who we want to showcase against what handedness of pitcher — and who we want to hide. The D-backs are not chock full of top options on either side of the plate, but they do have players worth featuring either way. Against RHP, it’s Goldy, Lamb, and Peralta, with Pollock and Tomas not too far behind, and Castillo far from a liability. Against LHP, Castillo kind of switches places with Lamb, but no one really steps forward in Peralta’s spot. Still, both Pollock and Tomas project better, giving us a top four of Goldy, Pollock, Tomas and Castillo, with the other four players grouped at the bottom.

With a top five (RHP) and a top four (LHP), how would we tweak the lineup itself? Against RHP, our five guys will cover the top five spots — but for LHP, there may not be an easy decision on whether to cover #3 or #5. Still, we want on base and slugging information to help us. 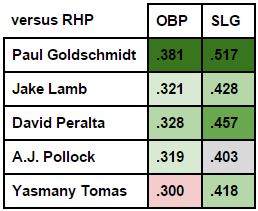 For RHP, our main “problem” is that there’s not a whole lot of overlap — Goldy is just so much better in both ways than the other four guys, with Peralta second best for both. For our kind of inquiry, it’s what Pollock and Tomas look like here that is what we’re really looking for — a flip flop of rankings in the two metrics. The more a player’s skills are weighted toward OBP, the higher he goes; the more toward SLG, the opposite.

Tomas is our #5 guy, fairly clearly, despite that spot being arguably more important than #3. Goldy either “wastes” some of the impact of his OBP by batting 4th, or some of the SLG by going 2nd; the very bottom of our lineup is particularly weak, though, if it’s a pitcher, Owings and Ahmed — and if that means weaker than the average bottom of a lineup, we might go ahead and push Goldy toward #4 in the lineup.

After Goldy, Peralta and Lamb are the next two guys, belonging in the other two important slots (#1 and #2). With Peralta’s SLG advantage so much more a factor than his OBP advantage, though, we might put Peralta in the second spot — and Lamb in the leadoff spot, answering the question we were looking into (for starts against RHP only!). Yes, this puts Lamb and Peralta back to back, opening up the team to some lefty specialists later in the game. It also means, though, that the two may maximize the number of plate appearances against RHP starters, and it’s not like a starter is getting pulled before the third time in the order unless things have already gone awry for that fellow. Oh, and we’re talking specialist here, definitely; that lefty isn’t staying in for Pollock, Goldy and Tomas. In addition, we could very well see Lamb lifted in advance of his fourth plate appearance in favor of Brandon Drury or even Phil Gosselin, which could also make for a double switch opportunity. 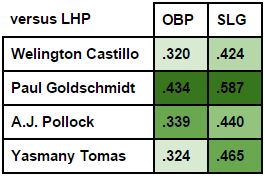 For LHP, our main “problem” is that we just don’t have a fifth guy in the mix (and also that Goldy thing, yet again). With no shortage of OBP options and a similar bottom-of-the-lineup conundrum, Goldy might still be the #4 guy, although yet again you could easily make a #2 slot argument. Again, Tomas and Pollock flip flop on the two metrics, and this time, they would be the other two of the top three hitters, so long as you believed the numbers.

Yeah, Pollock would have a particularly high SLG mark for a leadoff hitter, but since when is that a bad thing? It would be far worse, it seems, to try to put Ahmed atop the lineup just to get more use out of Pollock’s SLG later. He may come on with fewer runners most of the time, but coming to bat more often basically makes up for that. This works out pretty simply: Tomas would be the #2 man if Goldy were not, and Castillo would make a very fine #3 hitter against LHP. Of Peralta, Lamb, Owings and Ahmed, no one has particularly pretty numbers, but no one has horrendous numbers, the way that Owings and Ahmed did against RHP; the first plan would probably be to install Peralta at #5 due to a SLG advantage, unless Owings rallied and looked more like the 2014 version of himself.

It’s not that things like baserunning don’t matter; it’s that the D-backs don’t have any baserunning duds. Baserunning wasn’t a Tomas strength in 2015, but Mack Newton and a year’s worth of coaching would probably help with that; if you wanted to use baserunning as an excuse to flip Goldy to #2 in the LHP version of the lineup, that would also make sense. No matter what, though, it would be hard to go wrong with the 2016 lineups; it’s just a question of whether the D-backs do something silly like put a sub-.300 OBP hitter up to the top spot in the lineup just because he’s fast. 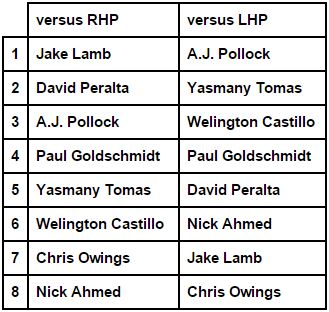