D-backs Nearly Run the Table in Arbitration Double Plus: the Impending DH in the National League

Can the Diamondbacks Take Advantage of a Weak National League?

There’s a weird disparity in baseball right now. Jason Stark profiled it well for ESPN last week. In the American League, there are few, if any, teams that have no chance to compete. Using Fangraphs’ projected standings based off Steamer projections, there is no team predicted to win fewer than 78 games. Ten of the 15 teams are projected for .500 or better records. By contrast, the National League has six teams projected to win less than 78 wins and only eight teams are projected for .500 or better records. By that measure, the AL would stand to be more competitive overall than the NL.

But that doesn’t show us the magnitude of this disparity. Maybe the charts below will. 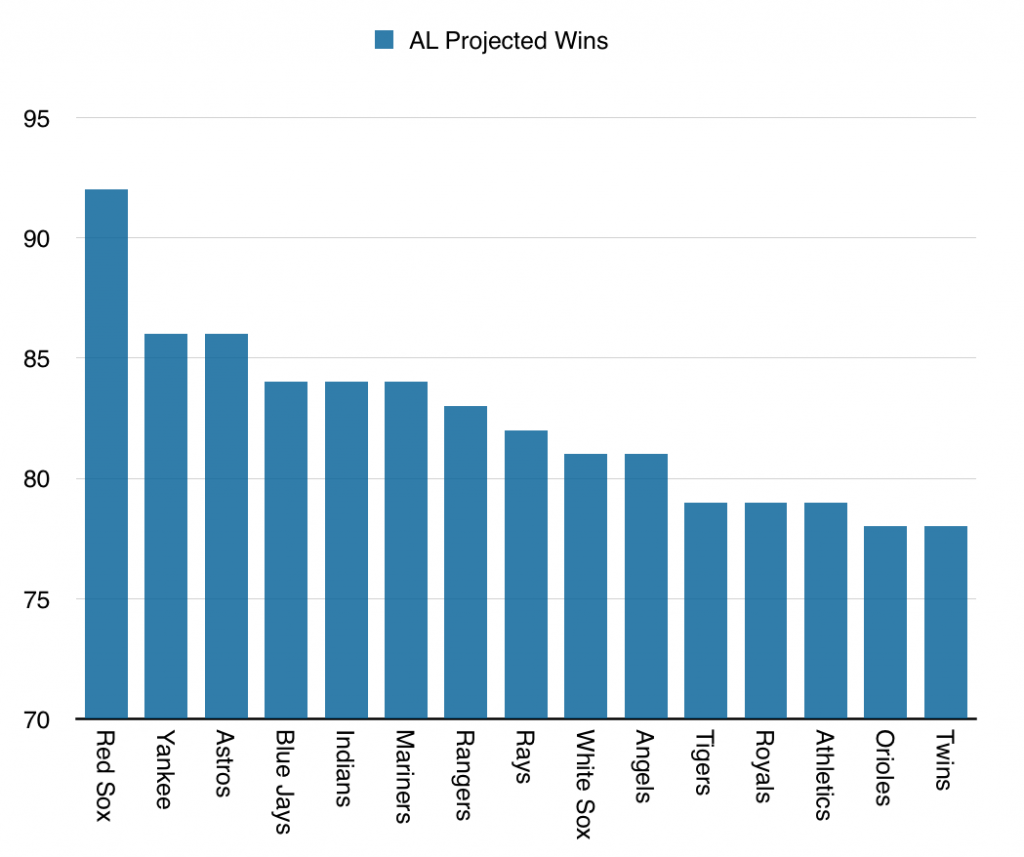 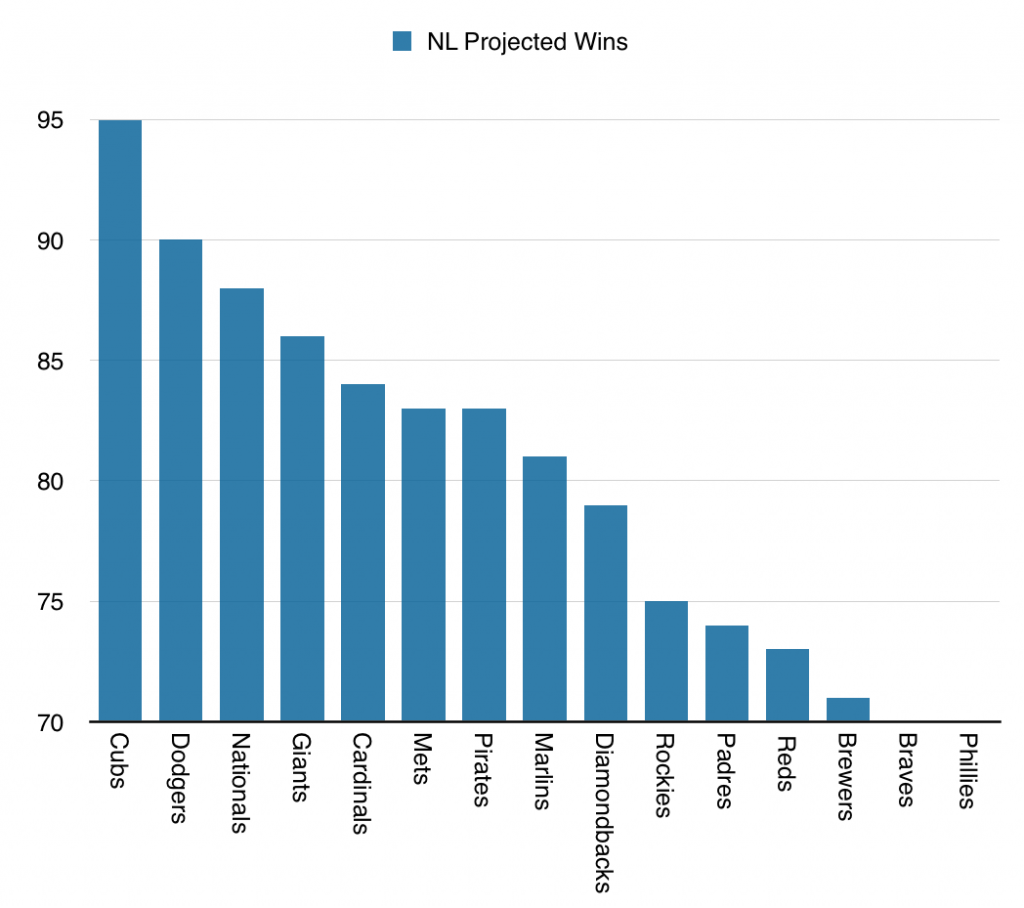 The curve is obviously much steeper in the National League. The Braves and Phillies don’t even make the meet the 70-win threshold. The sixth-worst team in the NL, the Rockies, finally reaches the 75-win mark while the sixth-worst team in the AL, the Angels, are right at the .500 threshold at 81-81. These are clearly different pictures, and although there is some interleague play, the National League has a huge high-low disparity compared to the American League.

The D-backs aren’t alone here. Other National League contenders will have a similar situation on their hands. But the discrepancy here could have major ramifications on team records. Never before have we seen so many doormats… er, rebuilding teams, in one league. From Stark:

Now obviously, with the projection business being the imprecise mess that it always is, the chances that it all plays out that way are somewhere in the vicinity of, oh, zero. But let’s assume it’s at least close, because it’s not unreasonable. Then these would be the two most significant takeaways:

1. It would be the first season ever, since the formation of the American League in 1901, that the six teams with the worst records in baseball would all come from one league.

2. Even more significantly, it would mean that only nine teams — at most — are fighting for five playoff spots in the NL. And it’s hard to beat those odds.

There has been criticism of the situation and it has stemmed from two areas:

1. People aren’t sold on the projections and I get that. We had that discussion here already. Predicting the number of wins is a super imprecise science – one that takes a million things into considerations and only gets us close. Like I said in the piece I wrote last week, it serves best as a sort of benchmark or shorthand for predicting the pecking order in baseball. Surely there aren’t 13 teams that will finish within two games of .500, but there are probably 13 teams who are roughly .500 clubs based on talent and a little bit of luck (or unluck). You get the idea.

2. People aren’t sold that all of these team, the Brewers and Reds and Braves and Phillies and Padres and Rockies, are rebuilding. Those last two are especially hard to label as rebuilding franchises, especially considering the Padres went for broke and, well, ended up broke. Meanwhile, the Rockies are in the worst place to be – no man’s land. They’re not bad enough to really commit to a rebuild (unless they do eventually ship off Carlos Gonzalez) but not good enough to play meaningful baseball. The whole Coors Field things wreaks havoc on their situation, too, and they’ve never found a true winning formula there, although ownership and leadership have had a big hand in that, too.

The Brewers sound committed to rebuilding based on the words of new GM David Stearns. The Phillies are finally taking a new approach post-Ruben Amaro. The pieces they got from the Rangers for Cole Hamels certainly have them pointed to a more inspiring future after they held on to their contention window a few seasons too long. The Reds seem content to waste the remaining good years of Joey Votto while they try to remake themselves, although I’d expect a different strategy than that employed by Milwaukee and Philadelphia. The Braves are looking to rebuild around Freddie Freeman, with a large helping hand from Arizona, just in time for their new ballpark to open in 2017. Aaron Blair, Dansby Swanson and Ender Inciarte could all log time for Atlanta in the debut season of their new digs. These teams are clearly rebuilding themselves in my eyes.

The Diamondbacks, along with all of the NL contenders, will have to be opportunistic and take advantage of this effect. It stands to reason that if the team were even close to .500 against all other competition, they could inflate their record by dominating this weaker competition. If they won, say, 40 of those 63 games against the six bottom teams in the NL, they might be able to pull off something like an 88-win season. Maybe 90. But one has to wonder, what will the Dodgers and Nationals and Cubs’ records look like?  It’s not as if Arizona is the only team that will face this disparity. Maybe it takes 90+ wins in the end just make a Wild Card appearance.

It’s hard to prognosticate this effect, but it should be on your radar. The team still has unfinished business and is a fringy contender as it stands now. There are probably six teams that are better than them on paper. The game’s not played on paper, but you get the point. Taking advantage of this weird, historic disparity might be the difference between getting in and sitting at home come October. The rest of the NL is going to be tough, but holding serve against the haves and cleaning up against the have-nots could be what it takes.

4 Responses to Can the Diamondbacks Take Advantage of a Weak National League?