Double Plus: the Impending DH in the National League Fastballs and Changeups and Diamondbacks

Second Base: Perfect the Enemy of Good?

In baseball, we hate waste. There aren’t too many teams with two catchers, each of whom would be starters on most teams; if you’ve got two and you feel like you can’t fully use both of them, one usually gets worked into a trade, either by the team, trying to fill a need, or by an enterprising trade partner. Now that David Peralta has shown that he can hold his own against lefties, he’s unlikely to be used only in a strict platoon. Starting pitchers are usually given every chance to start before converting to relief, Yasmany Tomas got the chance to show whether or not he could play third base — the list goes on. When you consider baseball’s expansive farm system and enormous active rosters, you can see how success could often be a matter of maximizing the assets you have.

Broadly speaking, I think we’ve seen the pendulum swing in the other direction in recent seasons. 4th outfielders may be the best example — it’s okay for an outfield bat to have a significant platoon split, especially if that outfielder can be moved around. Gerardo Parra just signed with the Rockies to maybe fill that kind of role, in return for a handsome $27.5M guarantee for three seasons’ work (including buyout on a fourth). Ben Zobrist was traded for a handsome return before the trade deadline last year and received a handsome contract from the Cubs this offseason (4 years, $56M), in part because of the roster flexibility he brings that allows for part-time players to contribute in more than backup roles. And, it’s probably worth noting, the industry seems to have a very high opinion of “three plus” outfielder Ender Inciarte right now, I assume because he’s just handsome.

Time shares are where the sport is headed. We’re away from worrying a ton about not using players enough, and now we worry about using true backup or utility types too much. There’s no way to get it perfect; it’s all a question of how you’d rather miss, with players warming the bench too much and waiting too long in the minors, or with having way too many innings and plate appearances go to replacement-level players.

Both things are stresses for the D-backs right now. They don’t have the overall talent of some of the other MLB organizations; they tried to hijack a Contention Window by spreading those all into the MLB roster right now, in a playing time arrangement that could work. At the same time, the now-formidable U.S.S. Diamondbacks can’t keep pace with other National League contenders if it springs too many playing time leaks, with playing time going to the likes of a 2015 version of Chris Owings or a struggling version of Socrates Brito.

Those stresses are now centered on second base, like a fault line. On the one hand, this Contention Window doesn’t stay open for long if the team has to buy players instead of using cost-controlled players like Jake Lamb; on the other, black holes like the production the team got out of second base in 2015 (-1 fWAR, worst in the NL) could keep the team from reaching the playoffs. Those kinds of black holes, though, also offer the quickest, cleanest and cheapest ways to upgrade a roster in a meaningful way. 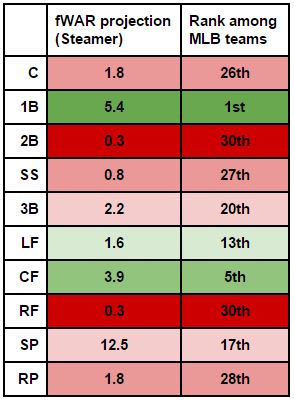 FanGraphs hasn’t yet incorporated the ZiPS projections into their depth charts or projected standings, but the Steamer-based rankings are not very bullish on the D-backs. What little good is happening comes largely from first base and center field, with left field (led by David Peralta) a clear plus, as well. Third base is the kind of thing the D-backs would probably need to ride with, even in a best-case scenario.

I wouldn’t get too pessimistic based on these projections for two main reasons. One, the NL is pretty strange next year, with lots of opportunity due to an unusual number of rebuilding teams. In relief pitching, both of the teams behind the D-backs are in the NL; the same goes for 3 of the 4 inferior catcher projections, and 2 of the 3 shortstop projections. The other is that while projections are conservative in general, there is reason to believe that the D-backs’ projections are hit by that kind of regression more than other teams, especially in pitching. These projections are based on fWAR, which is in turn based on FanGraphs’ calculation for Fielding-Independent Pitching — and because FIP is based on strikeout, walk and home run rates, a high-contact but contact-management staff like the one the D-backs have built is particularly undervalued. As it happens, the D-backs also have several position players who have done better in the majors than their minor league numbers would have suggested, and they’re still fairly new; Peralta alone tallied 3.7 fWAR last season, but did so with a hard-hit skill that has only been respected by projection systems in the past with a longer track record of high BABIPs or big power.

Only two positions are bright red: right field, and that second base fault line. Like it or not, Yasmany Tomas and his contract are probably not going anywhere, meaning that right field spot is not a place to upgrade. With premium pitching all spoken for, upgrades in the pitching staff would also be very hard to come by. And so we’re back to second base.

I’ve really liked the idea of the 4-man, 3-position time share that the dual positional flexibility of Chris Owings and Brandon Drury can offer. All four of those two and Nick Ahmed and Jake Lamb might end up playing a bit less than they could — arguably wasting some value — but since off days need not be planned in advance, they could be planned against the opposing team’s pitching staff or executed in response to whoever was dealing with some bumps or bruises. That unit of four would be greater than the sum of their parts, if you judged the sum of their parts to be what you’d get in a system of starting players and true backups.

But as noted in this space a few weeks ago, maybe it’s okay for the D-backs to err in that other direction by signing Howie Kendrick. Sure, you might lose the value of Brandon Drury’s positional flexibility (and ability to play second base), and you might end up having to play Ahmed more than you’d like, or pair him with a real backup type instead of Owings, or pair Lamb with someone who probably shouldn’t be playing a ton, like Nick Gosselin or Aaron Hill. But maybe that’s just yet another cost of getting better.

I think Jeff and I both have noted here a few times, as well as on The Pool Shot and Twitter, that it would be hard to add Kendrick without first addressing the presence of Hill and how to re-fashion the 4-man, 3-position infield puzzle. Indeed, the D-backs are trying to move Aaron Hill right now, maybe as a prelude to coming to terms with Kendrick. Unfortunately, it seems very unlikely that that will work, unless the D-backs pull yet another deal like the Braves deals that moved Trevor Cahill and Bronson Arroyo last year, trading away a prospect for salary relief. After reviewing the rosters of all 29 other teams, there just doesn’t seem to be a fit out there — the best I could find was probably the Angels, and yet if Johnny Giavotella gets hurt or struggles, there may not be a whole lot that Hill can do that Cliff Pennington can’t do. As we’ve said, at this point the only way for some team to take on some of the $12M commitment in 2016 to Hill would be if he looked good in spring training and some team developed a second base need during spring training. That’s still probably the case.

Trying to move Hill right now might be more about money than about second base; as I wrote in October, Hill’s presence wasn’t going to block additions at shortstop or second base this offseason. The real trick with a second base addition would be the “waste” that would occur by demolishing the 4-man, 3-position playing time scheme. Consider it something like this, without Kendrick and then with Kendrick: 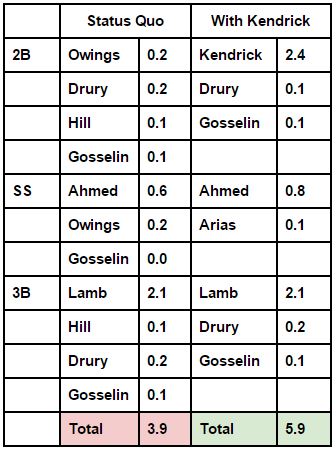 I tried to stay more or less true to the FanGraphs depths charts with these, making just some slight tweaks based on my understanding of what the playing time picture would be like. The difference here is two whole wins — about the difference between a #2/#3 starter and a solid #5 starter — but that’s only true if you believe Owings is barely better than replacement. If you do, then just like Hill, you’re not treating Owings as an obstacle to adding a second baseman anyway; it’s more a question of how to best use Brandon Drury, especially with Phil Gosselin in the picture.

Without Owings, the D-backs would need a backup shortstop — and it’s not clear that Gosselin can fill that role (although, watch for the D-backs to try him there early in spring training). And if Gosselin can’t do it, that’s three players — including Hill and Drury — who can play both second and third, but not short. You could add Joaquin Arias, who the D-backs signed to a minor league deal, but if Arias is merely backing up at shortstop, it would be strange if he were not also in the utility picture for second and (especially) third base.

If Kendrick were added, we’re talking about “wasting” Drury, or trading Drury — and in the latter case, using Phil Gosselin as a utility player, with some other contingency for shortstop. That’s what can get cashed out; Owings and Hill probably can’t be moved for any price worth taking, and Owings might end up back in Triple-A. For a team trying to maximize its assets, that might be too high a price to pay (especially when you add Kendrick’s contract and the loss of the end-of-first-round draft pick). For a team willing to “waste” a bit of talent on the bench to get the best possible chance to compete in 2016, though, the juice could be worth the squeeze.

It would be great if the D-backs could put Kendrick on reserve at the free agency store, then find the best possible deal for Hill in spring training, and try to cash out Drury. It would be great if they could start to work out Owings at third base in a quest to make him a utility infielder before committing to Kendrick. If they could, that would be the perfect way to upgrade the team with a single reasonable contract, and in the spot on the roster that remains as a place for upgrades. But perfect is the enemy of good, after all. Depending on Kendrick’s ask at this point, a deal with him could be the good that the D-backs could get without worrying too much about the perfect. If the D-backs recast their infield efficiently and with little waste, they’d be owed some serious praise. If they make changes while marginalizing some of their current players, that might just be the cost of doing business.

11 Responses to Second Base: Perfect the Enemy of Good?