We have a full magazine of projections, now, with Baseball Prospectus publishing their PECOTA numbers earlier this week. It’s a lot to look at all at once, and it’s far from gospel — the projections all seem to be strangely low on A.J. Pollock, for example. One of the great features of PECOTA, however, is that in addition to the “mean” projections we see bandied about, the system also spits out a range, all the way from a 10th percentile projection (a 90% chance the player does better) to a 90th percentile projection (a 90% chance the player does worse). On this most wonderful of days—D-backs pitchers and catchers report day, with Spring Training officially open—what can we learn from what PECOTA sees as the best case scenario for the team?

In keeping with the theme of the day, let’s get a look at what PECOTA thinks of the pitching staff, using this projection of playing time. “We” expect Zack Greinke, Shelby Miller, Patrick Corbin, Rubby De La Rosa and Robbie Ray to be the team’s starting five in terms of innings, with Archie Bradley and Braden Shipley combining for 21 more starts and Zack Godley, Tyler Wagner and Josh Collmenter mopping up another 9.

Before proceeding, it’s important to note: the way PECOTA works, it’s taking those depth charts numbers at their word in terms of starts and appearances. Ray’s 10th percentile projection is 21 starts — and his 90th percentile projection is 21 starts. Within that, though, his innings do change based on the quality of the outcome, from 103.2 innings (4.9 innings/start) to 137 innings (6.5 innings/start). The fact that playing time doesn’t change makes an exercise like this one a little easier, at least for the starters. We’ll circle back with the innings total later.

The Rotation: An Optimistic Look

If I could put 70th percentile into words, it would be “reasonably optimistic.” Unless PECOTA is way off in some way—not particularly likely, given over a decade of tweaks—the idea is that about half of the “mean” projections will be over, and about half will be under. The D-backs front office almost definitely does not believe that it has guaranteed any particular win total this year, but it could rightly think that it has secured a chance at making a strong showing at the playoffs. For a mid-to-low market team like the D-backs, a “reasonably optimistic” projection can still be a very important exercise: even if things go mostly right, where will we be?

A damn fine rotation, that’s where. In descending order of Wins Above Replacement Player: 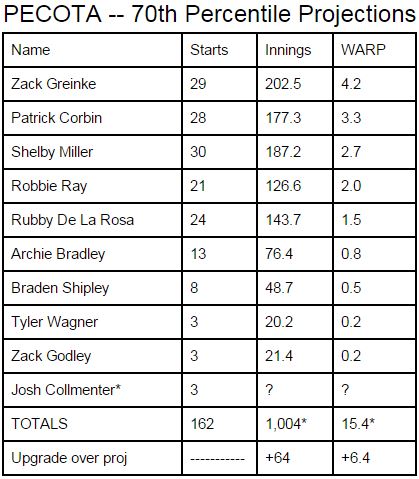 *As I can’t separate Collmenter’s 3 projected starts from his other 50 projected appearances, I’ve treated his totals as “zero” throughout.

The team’s WARP projection for these starters is 9 even, and this would be a tremendous outcome for the team. With the possible exception of Shipley, there’s not one outcome above that makes me think “no, that really can’t happen.” Among pitchers who got more than a few starts in the majors last year, only Corbin, De La Rosa and Bradley would be improving on their 2015 seasons if they posted the WARP totals above. Thoughts:

With some innings caveats we’ll get back to, this 70th percentile set of outcomes for the D-backs would increase their PECOTA-based win total projected at Baseball Prospectus from 78 wins back above the .500 threshold (remember how hard that was last year?) to 84 wins. Not too shabby. But what if things really went well? 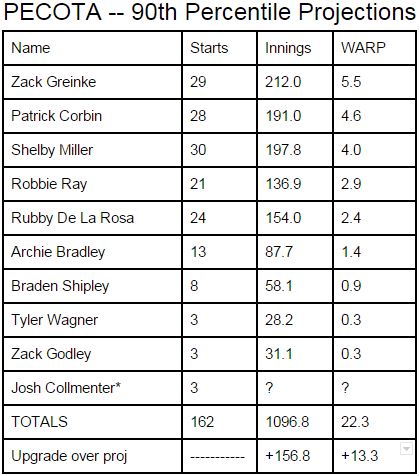 Whoa — at this point, the innings increase would put a pretty serious dent into the WARP total we’d expect from the bullpen. Without that subtraction, though, this is one hell of an addition: enough to raise that 78 win projection to 90 wins. PECOTA is pretty soft on some of the top position player performers, and so with a little give and take, you can start to see what a playoff version of the 2016 D-backs would look like. Thoughts:

The Bullpen: An Optimistic Look

If we’re talking range of outcomes, there might be nothing wider than the number of innings that the D-backs bullpen will contribute in 2016. Last year, the team’s relief crew blew the freaking doors off of the previous franchise record for innings pitched, with a robust 579.1 innings, more than 50 more innings than the D-backs’ previous high water mark. As things stand, the depth charts on which the PECOTA numbers are currently based has the bullpen sitting at 503 innings, a total that would have ranked just 17th-highest in 2015. That’s already expecting a lot to go right—a lot of it has to do with Greinke pitching essentially a full season—and if you forced me to make a bet, I’d still take the over on relief innings. The chances that all three of Ray, RDLR and Bradley all get closer to 6 innings/start than 5 innings/start doesn’t seem that strong, and as noted above, the depth charts’ total for Corbin (168 IP) also seems unlikely. 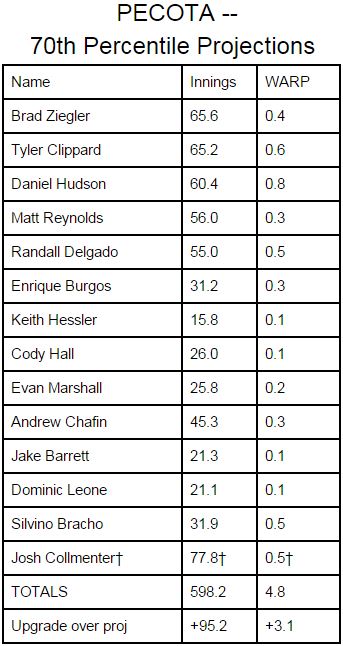 †I’m crediting all of Collmenter’s innings as relief innings, although the depth charts have him starting three games.

Right off the bat: this is way too many innings. I think the depth chart is also more than a little off here, too; with considerations like options, it is possible that Bracho won’t start the year with the big club, but even PECOTA has Bracho with the lowest ERA of this group (3.16 ERA; next lowest is Daniel Hudson, at 3.50). You can’t keep a good man down. I’m also incredulous that Reynolds will stay in the bullpen all year, and that Chafin’s innings are at all more likely to be limited as compared to the top arms. That said, though, some thoughts: 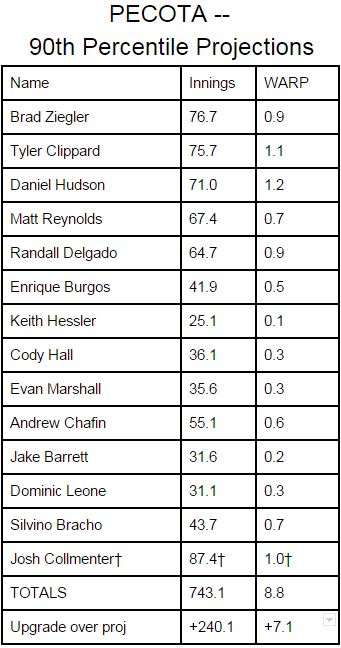 Thoughts? For me, it’s more of the same, except that our innings adjustment has to be much, much more drastic. It’s hard to see Ziegler, Clippard and Hudson attaining these innings levels unless there’s just not enough help to go around—which is not the “way too many innings” scenario we’re looking at here. In both sets of projections, Hudson’s numbers are the kind of thing I was expecting (“reasonably optimistic,” and then “as optimistic as possible”). Still, we can take some value lessons from the above. Silvino Bracho has that potential to be worth a full win in a full season, and Collmenter probably can do this well as a reliever, and there is some support in the numbers for the naked possibility that Randall Delgado and Matt Reynolds could really do a lot of damage here.

Before we turn to the position players tomorrow, we should take away something about what a 70th percentile picture of the D-backs pitching staff could look like overall. From the bullpen, it seemed like just over 4 wins was definitely possible in a “reasonably optimistic” scenario, even at 503 innings. Even that discount on innings, though, doesn’t comport with our 15.4 wins number from the starters: that’s a total of 1,507 innings, and most teams last year pitched 1,440 to 1,465 innings (although the D-backs did have the second-highest total, with 1466.2). Our “reasonably optimistic” staff would pick up 0.6 wins per 50 innings or so, and while once again the lost innings would probably have been going to the iffiest relievers, let’s just knock that off. Our “reasonably optimistic” total is 18.8 WARP from the pitching staff.

That, my friends, would be a 8.1 win upgrade from the current PECOTA projection, enough to up our 78 win “thanks for trying” season to a “hey look, maybe we made the playoffs” 86 wins. If we find out from looking at the position player side of things that the end of our “reasonably optimistic” exercise that there’s some room for growth, a squad with a probable shot at the playoffs is at least possible.