The D-backs finished last season at 79-83, but actually outscored their opponents 720 to 713. With that positive run differential, we’d expect better record: something in the order of 81-81 or 82-80. The D-backs played better than their record would indicate, and that shortfall of 3 or 4 wins could just be luck. It could also be a matter of firing bullets at the wrong time.

Yesterday, Tom Tango pointed out at FanGraphs that Josh Collmenter pitched 32 games last year as a reliever, and that among relievers with at least 30 innings, he ranked 23rd in RE24, a stat that deserves tons of respect in measuring the performance of relievers in particular. Considering many of the pitchers ranked ahead of him logged 15 or 20 more innings than his 52.1, that’s no small feat (RE24 is a counting stat). Collmenter probably deserved that sparkling 1.89 ERA in relief, nearly as good at Brad Ziegler‘s 1.85 ERA. But as Tango asked: if Collmenter racked up those sterling numbers mostly at times when sterling numbers didn’t actually help his team win games, are they really that sterling?

We can bypass the metaphysics today, and skip straight ahead to the operations management one: should the D-backs use Collmenter differently? There are reasons to say yes. Over 201.1 career relief innings, Collmenter has limited hitters to a .229/.295/.341 slash line, excellent results that led to a miniscule 2.32 ERA. The team tried taking Collmenter in one direction, seeing if Collmenter could bring those numbers to the rotation without losing much in translation. What about the other direction? In short relief, Collmenter probably couldn’t and wouldn’t pitch the 80-90 innings he might log in a long relief role. In a world of volatile relief help, though, why would you waste 2.32 ERA pitching, if that’s what using Collmenter in a de facto mop-up role would mean?

Let’s get at what Tango was looking at, first. With Leverage Index — a method of Tango’s own invention — we can get an idea of how a pitcher was used. The Leverage Index is conscious of the score in the game, the innings, and of the outs/runners situation (although blind to hitter quality). You can learn more here, or you can trust me that it’s good, and that the average leverage is set at 1, so lower than that means “not so important” and higher than that means “more important than average.” If you’re doing the math in your head, it probably looks a lot like the average LI above is a lot higher than 1—it is. Left out of this are all of the pitchers who never stick around for long, and who aren’t counted on especially important innings when they’re around. 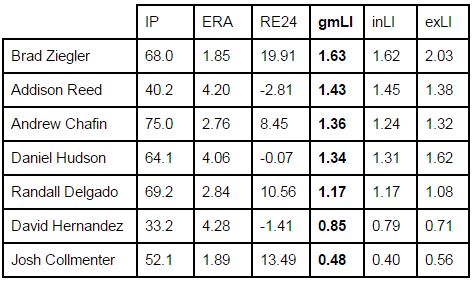 So… yeah. There’s a little bit of apples and oranges here, because only Collmenter was really used as a long reliever; he pitched 1.64 innings per appearance as a reliever, and the pitcher with the next-highest ratio was Andrew Chafin, all the way down to 1.14 IP/G. The “inLI” statistic tells us the average leverage for when Collmenter was brought in games, and of the 210 relievers with at least 30 innings pitched, the only relievers with a lower inLI were mop-up men Brad Hand, Austin Adams, Scott Carroll, and Anthony Bass.

Yuck. What a waste, that 1.89 ERA was. Maybe it’s that Delgado was needed for more important innings, especially with the team carrying 8 relievers for most of the year. Maybe it’s that Collmenter wasn’t trusted; for much of the season, his 5.24 ERA as a starter last year obscured how great he was the second he was returned to his native land. Whatever the reason, of those 32 games in which Collmenter pitched in relief, the inLI was over 1 just three times. It was over 0.62 just one other time. Collmenter pitched in garbage time.

Trust those relief numbers, please. As Jeff noted on Episode 52 of The Pool Shot and in this space last week, projection systems have been egregiously unfair to the D-backs relief crew, most likely. All in one place are three pitchers who succeed in strange ways, ways that projection systems aren’t designed to respect, necessarily. Ziegler’s ground balls have made him reliably great, despite a strikeout/walk ratio that looks worse than pedestrian. You could say the same about Tyler Clippard‘s fly balls. Collmenter’s fly ball rate is very high, and in some ways he’s like Clippard — and what he loses to Clippard in having not as extreme a fly ball rate (Clippard’s is the very most extreme in baseball, and it’s not close), he gains back with that funky delivery that still caused hitters fits in Collmenter’s fifth year in the league.

You see that RE24 for Collmenter in the table above, which tells us he outperformed Run Expectancy by a crazy 13+ runs in barely over a half season — as compared to the average reliever, rather than as compared to a replacement level pitcher. Daniel Hudson was right on that “average” line, pretty much — so what we’re saying is that Collmenter was worth almost a win and a half more than Hudson. Why should Hudson be the setup man!

Sadly, I know of no way to obtain strength of opponent info in a way that would give me a number only for Collmenter’s relief innings. But for what it’s worth, of the 27 pitchers to have thrown for the D-backs last year, Collmenter’s overall oppAVG was .257 was the 4th-highest on the club. Long relievers don’t really get aimed away from better hitters, although in a complete blowout they might end up facing a few subs. It doesn’t seem like he feasted on low-hanging fruit. Among the group above, that honor goes to David Hernandez (.247 oppAVG).

Changing location and speed and movement is all well and good, but monkeying with a release point is something few pitchers experiment with (see you later this season, Johnny Cueto). Nothing in the rules says you can’t swap in a new pitcher, though, at least most of the time.

A few years ago, Christopher Carruthers published a study over at FanGraphs in which he found R.A. Dickey‘s effect in games after his games to be something like 1.4 wins’ worth of value — it’s just hard, apparently, to see a real fastball after trying to adjust to hitting a knuckleball. When we learn how to do this with someone like Brad Ziegler, we’ll let you know — although he’s been pitching late enough in games for hitters to hit the showers instead of facing a new pitcher. Collmenter is different, but the same, maybe. Look at how his release point really sticks out, non-Ziegler edition (these are from 2015, and for those pitchers’ principal fastballs, only): 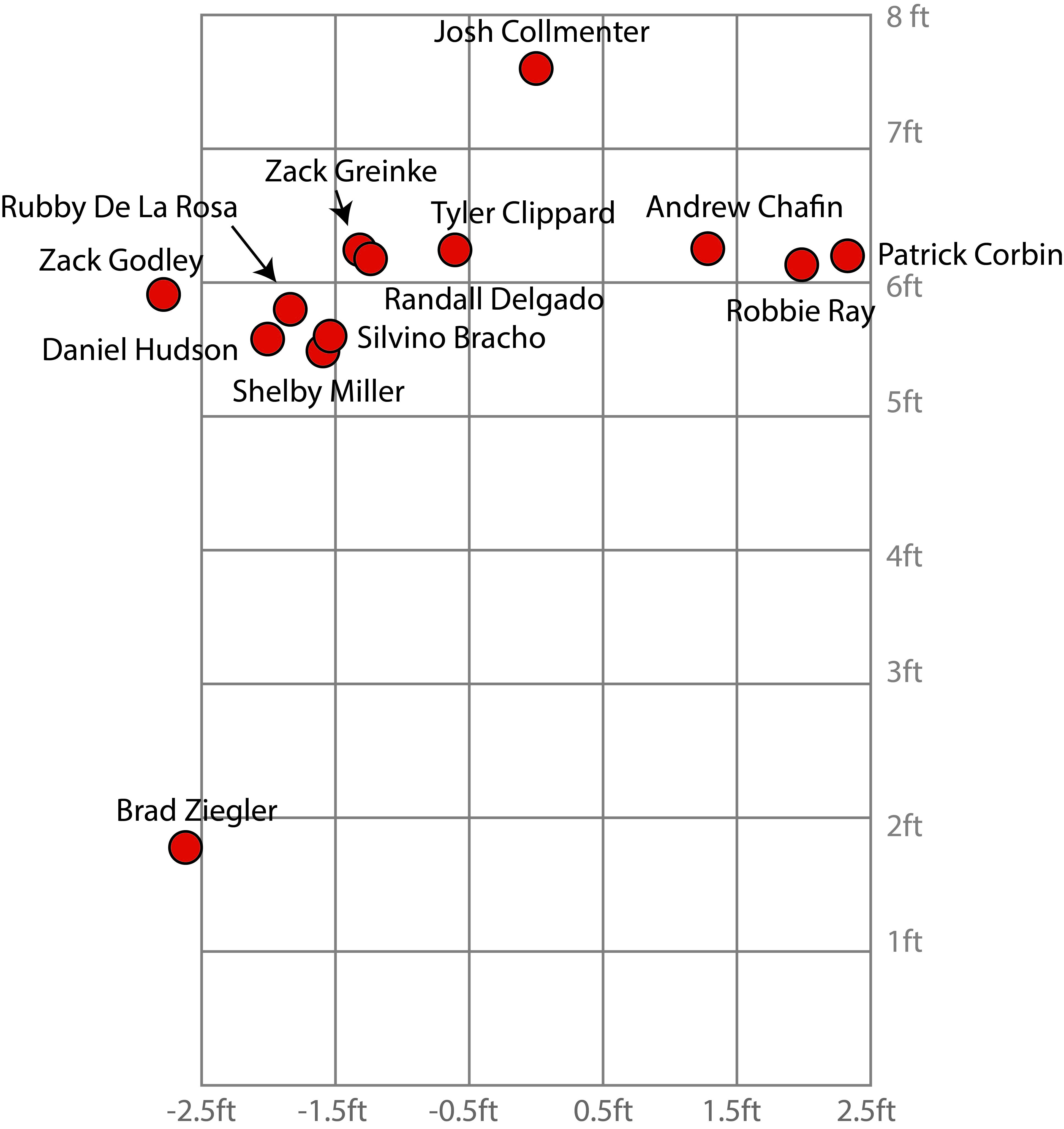 Just say for the sake of argument that part of the reason why Collmenter has success with a mid-80s cutter as his main pitch is that release point. It stands to reason that if he profits from a change in perspective, there’d be some kind of After Collmenter Effect, a lot like an After Dickey Effect. As a long reliever, Collmenter maximizes that — he might face the lineup almost one full time through, but he’s gone before he sees someone twice, for the most part. It’s part of why we think Collmenter had difficulties as a starter that he doesn’t seem to face in relief. And just like a pitcher might set up a changeup with a fastball, it probably doesn’t hurt him to come in the game only after hitters have seen someone more conventional… especially since he works with batting practice velocity.

As a short reliever, Collmenter wouldn’t blanket more plate appearances with an After Collmenter Effect, but he would do so in more games, and probably would end up doing so at more important times. This, like that cutter and the changeup with which Jeff wants to have kids so badly, is something that Collmenter could take with him into a higher-leverage, short relief role.

The D-backs want to roll with a 12 man pitching staff for much of the year, from what we’ve been made to understand. I’ll believe it when I see it, but it’s definitely possible, and it’s even more possible they’ll try very hard. Trying very hard to go with seven relievers instead of eight doesn’t exactly fit with moving your long reliever into short relief, especially if that means he tosses 15 fewer innings.

And that’s fair. Unless the D-backs do something strange like roster Adam Loewen as a two-way player, they have way too many good pitchers to put someone on the 25-man as a mop up man. They just don’t have to, and so there’s no reason to. Moving Collmenter into a setup role would mean moving someone out of a setup role, or at least, making fewer setup appearances available to other pitchers.

So to move Collmenter into short relief, someone has to move to long relief. The best candidate on the roster may be Delgado, and as you can see from his 2.84 ERA and third-highest RE24 in the bullpen (10.56), moving Delgado into a lower-leverage role to move Collmenter up would be kind of like robbing Peter to pay Paul. And yet, Collmenter is so good as a reliever.

The D-backs could have fewer throw-away games this year. Last season, they scored 7 or more runs a whopping 36 times (rest of NL averaged 30.9 times), and they won 35 of them. Their fair share of games got away from them the other way, too — 32 games allowing 7+ runs (rest of NL, 32.9 average), in which they went 4-28. There were lots of lopsided affairs, which is maybe par for the course for a team trying out a whole lot of young pitching all at once.

That’s just much, much less likely this year, unless it’s because the D-backs are winning an embarrassing number of games by embarrassing margins. If the D-backs are willing to carry 13 pitchers, the pitching staff could be in a better position to help the team win games, especially if one of its best relievers in Collmenter is moved to a higher-leverage role. If not, Collmenter can still help the team succeed. Last year the D-backs went 10-26 when allowing exactly 5 or 6 runs, but the D-backs have enough young position players to think the team will get better at scoring runs, and not necessarily worse. When a starter is lifted in the fifth inning after yielding four earned runs, Collmenter could be there — and could end up improving on his win total of 1 as a reliever last year.