What Happened to Silvino Bracho?

If we’re being honest, Silvino Bracho was a pretty fringy big leaguer upon first glance. He’s listed at 5’10”, 190-pounds, which means he probably closer to 5’9″. There aren’t many good, sub-six-foot right handed pitchers in the majors. You’re mind is racing to find examples right now, and you probably thought of Marcus Stroman and/or Craig Kimbrel, which is fine, but trust me, they’re outliers. Bracho doesn’t throw extremely hard and he doesn’t throw extremely weird (i.e. he’s not Brad Ziegler). He’s really just kind of, well, your run of the mill reliever, right?

Yes and no. The “no” came first as Bracho shot up the organizational ladder last season, starting at A+ Visalia and winding up in the majors. He only made thirteen appearances spanning 12.1 innings, but Silvino sure made the most of them. He struck out 17 hitters, walked just four and gave up only nine hits (although two were home runs). For a kid who was riding buses from Modesto to Bakersfield at the start of the season to end the year facing the Houston Astros at Chase Field, it must have been a wild ride.

Over the winter we, and many others, penciled Bracho in as a integral bullpen piece for a revamped Diamondbacks squad. He showed such a unique ability to generate fly ball outs and strikeouts while limiting the walks, it was easy to visualize Silvino Bracho’s name on the 25-man roster. One small problem: nothing should ever be taken for granted with relief pitchers. At the very least we should have learned from the recent past and Enrique Burgos. Here was a guy that had undergone a very similar path up the ladder the year prior to Bracho doing so — Burgos had went from A+ Visalia to AFL revelation to the majors the following spring only to lose his command and return to AA to figure it out. Just as quickly as he’d harnessed an arsenal that seemed to have strong MLB potential, it vanished.

I can’t say that’s exactly what happened to Silvino Bracho because there are a lot of details in there that have been glossed over, but I can say that I should have probably approached Bracho with a little more skepticism than I did and I get the feeling that I wasn’t alone there. A groin injury suffered in the early spring set Bracho back, and when he did pitch, he scuffled a few times en route some decent overall numbers in seven appearances. He still surrendered a pair of home run, the hits were up and so were the walks, although he maintained a nice strikeout rate. Clearly, though, if you were watching closely, something was up. So what the hell was, or is, wrong with Silvino Bracho?

The first place to start is mechanics. Is there anything that Bracho was doing wildly differently as he was pitching? A quick glance at the tape doesn’t reveal anything major. Bracho has a drop-and-drive delivery as he collapses his back leg before pushing off towards the plate. Given how short he is, giving up inches on the mound with this delivery further reduces his ability to create plane (i.e. pitch “downhill”) and can cause his fastball to look “flat”. A look at his vertical and horizontal release points reveals some very small changes. His vertical release point fell in his small MLB time in 2016 but his horizontal release point didn’t move much. Overall, it doesn’t look like anything major here.

Looking at velocity, it doesn’t appear that Bracho lost anything at all. His fastball averaged nearly 93.5pmh (release speed) in 2015 and 2016 while his secondary stuff had the same velocities as well. Velocity, especially coupled with release points, can serve as a proxy for health. A big drop in velocity might signal an injury, but we don’t see that here. 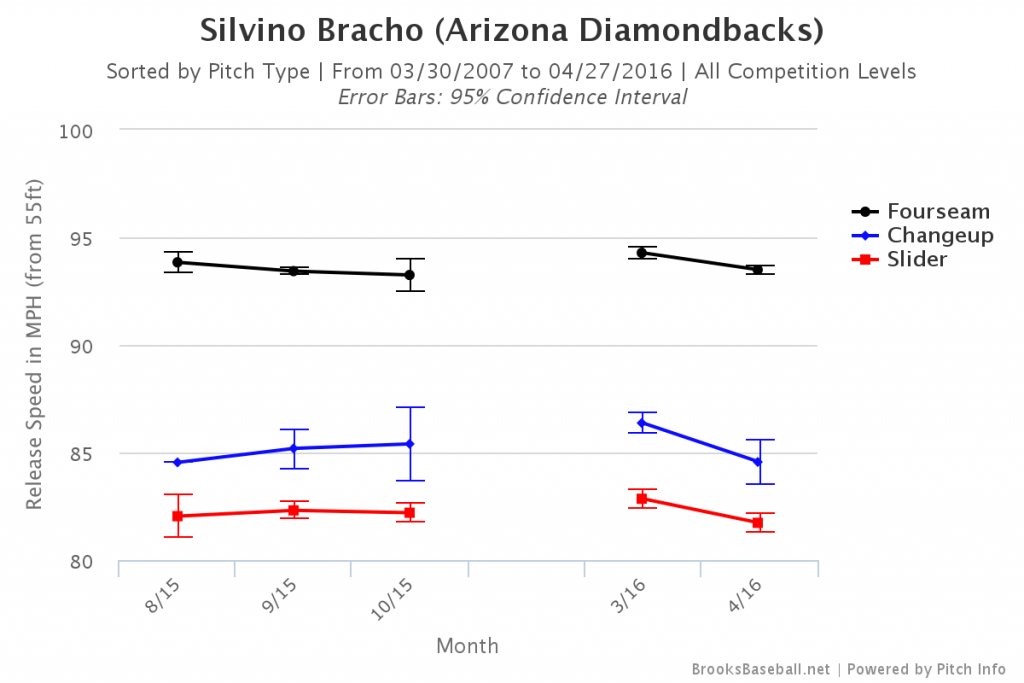 Silvino Bracho’s arsenal backed up his strong 2015 results. He showed a fastball that could flash plus with nearly 10 inches of vertical rise and could touch 95.5mph. In 2016, Bracho’s fastball showed the same rise and, as we just stated, same velocity. No big change to the heater, a pitch he relies on over 70% of the time. Bracho’s slider, his best and most-used secondary offering, did show a change, but it’s one you’d usually associate with the pitch getting better, not worse. The pitch showed deeper sink without losing horizontal cut. We’re using some very small samples here, but based on what we have to at our disposal, there’s nothing in the arsenal that would signal a major change.

Speaking of small samples, let look at our very last indicator: location. Perhaps Bracho was using his pitches differently than he did in 2015 and it didn’t work out for him. Let’s see how did locate all of those 2015 pitches: 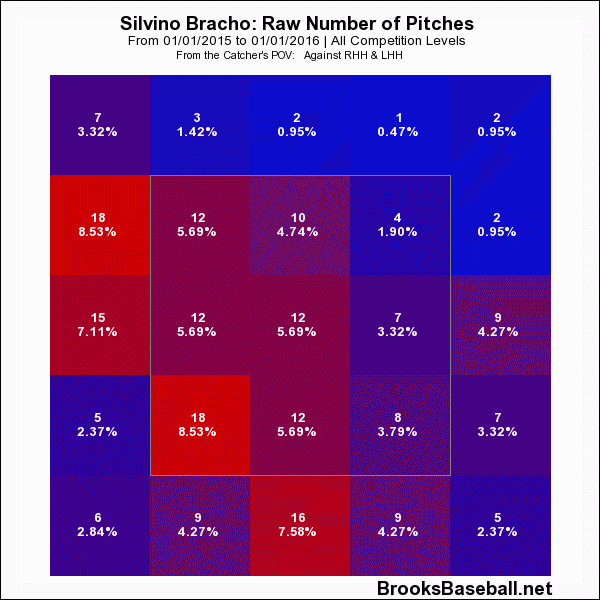 Okay, so Bracho was either up and to the arm side or down in the zone. It looks like Bracho had a plan: keep the ball away from the outer half of the plate against lefties and down against righties. While he really only showed a propensity to pitch to one side of the plate, that’s not as big of a concern for a reliever as it would be for a starter. Now, let’s see where his limited number of 2016 pitches ended up: 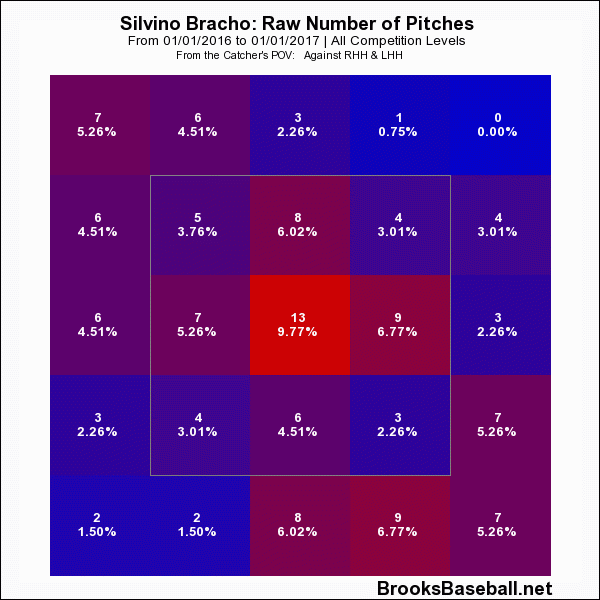 Um, yeah… Not much I need to say here. Bracho grooved a number of pitches and paid the price. More than one in three pitches were in the zone and middle or higher — basically the danger zone for any pitcher. All batters needed to do was lay off the obvious balls and wait for something fat in the zone to crush. Big league hitters miss, but they don’t miss that often and Bracho’s 2016 performance is proof.

So what do we do with all of this information? What does it mean for Silvino Bracho? In a sense, very little has changed. The pitches are the same, he seem mechanically consistent for the most part and he didn’t show any signs of injury. Instead, we saw what shaky command does to a non-elite relief pitcher. And it’s worth noting that most relievers are relievers because of command to begin with. If they could strongly command their arsenals, most would have remained as starting pitchers (where many began their careers).

For Bracho, the raw stuff is decent, but it’s not good enough to get hitters out over the heart of the plate. Almost nobody has an arsenal that can accomplish that. He’ll need to show more command in AAA Reno before he gets another shot at the majors. Right now, it looks like he’ll be down there a while even as Chip Hale rotates relief options to keep the bullpen as fresh as possible. But as Enrique Burgos has shown us, if the command comes back, Bracho stands a chance to be effective yet again in the majors. He has clearly set himself back this season, but he’s not done yet, either. He’ll have to find a better ability to control the strike zone if he wants to re-stake his claim to a spot in the Arizona bullpen.