A Fistful of Dollars: Arizona Saves Some Cash and Stays the Course Another Day, Another Meltdown: Which D-backs Relievers Will Stick?

D-backs Pitching Through the DRA Lens: Our Cleanest Look at Talent

One of my favorite debates within the baseball analytics community is how to evaluate pitching. We’ve collectively moved on from ERA since it has some obvious problems. The first is the most glaring: ERA tells most of the story of what happened, not how talented a pitcher is. We don’t really care what happened, we care mostly about how good a pitcher is going to be. Unearned runs don’t help the matter, and that helped push us towards RA/9 (runs allowed per nine innings pitched), and it has more predictive value than ERA, but not by a huge margin. FIP is built upon the DIPS theory but has some detractors, notably batted ball information. It’s easy to calculate with limited inputs but we’ve come to understand that batted balls are more controllable than first thought. xFIP normalizes home runs, then performs as FIP does, but some pitchers have historic home run issues, rendering xFIP’s value debatable. SIERA bakes in some batted ball information, along with the other inputs, making it a favorite in terms of identifying talent, but has been surpassed by yet another metric: DRA, or Deserved Run Average.

The New Face of Pitching Analysis

While the last paragraph might sound like a terrible bowl of alphabet soup and has the penchant for turning baseball fans off, it shouldn’t. We’re all after the same thing here, an attempt to answer the question, how good is a pitcher? That question should have value for any baseball fan no matter their desire to wade through the history of how we got here. Baseball Prospectus has been at the front here, using mixed models of statistical computation to come up with simply the best way to answer the question above. While the guts of DRA are complicated, the outputs are easy to understand. And, if you don’t feel like reading the backstory of DRA, that’s okay. Some of the sharpest minds in the game are behind it’s creation and you can instead just rely on the results to give you the best indicator of talent we have available. Year-to-year, DRA outperforms every other pitching metric at our disposal and it’s really where we should be focussing our efforts when evaluating pitchers.

This is accomplished through the most thorough breakdown of pitching any metric achieves. While FIP is nice in that it limits inputs to just strikeouts, walks and home runs, we know there’s more happening than just those three things. FIP is a big upgrade over ERA, but by adding inputs, DRA has surpassed FIP by a comfortable margin. Those inputs are as follows:

Here DRA covers the gamut of events while a pitcher is on the mound, resulting in the most comprehensive analysis of pitchers on the public horizon. The metric also normalizes for things like park factors, batter/pitcher handedness for every matchup, the catcher behind the plate, the umpire calling balls and strikes, and more. They’ve stripped out as much randomness as possible while including the largest range of inputs, creating the most holistic snapshot of pitchers. Pretty cool, right? In our attempt to understand how good a pitcher is, shouldn’t we consider everything? The answer is “yes,” we were just without the ability to do it well before DRA.

DRA and the Diamondbacks

Now that it’s here, we can apply it to our scuffling Diamondbacks pitchers and see just how they’ve performed to date (RA/9) versus how talented they are (DRA). The breakdown: 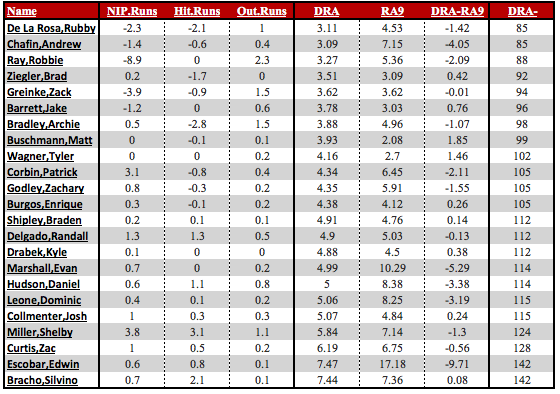 Let’s understand what we’re looking at here. The first statistical box contains the different components of DRA (NIP, HIT, and OUT Runs). Here you can see who’s been best in the strikeout/walk/hitter batter area (NIP Runs), best when it comes to controlling types of hits (HIT Runs), and generating outs on balls in play (OUT Runs). Run totals are calculated +/- from average, so a negative total shows strong ability to save runs. A positive totals shows extra runs allowed.

The second statistical box shows DRA (talent) and RA/9 (what’s transpired in 2016 to date), then subtracts DRA from RA/9. With DRA-RA/9, negative values show us pitchers who have better talent than what the results have bared. If you’re looking for pitchers that are better than what we’ve seen this season, look for the largest negative numbers. That might suggest some bad luck, likely on behalf of small samples in extreme cases.

The third statistical box shows DRA-, or how well a pitcher’s DRA relates to league average. Here, the smaller the number the better. Robbie Ray‘s mark of 88 means he’s been 12% better than league average when it comes to DRA. Silvino Bracho‘s 142 mark tells us he’s been 42% worse than league average. You get the idea — the better the pitcher, the smaller the number. Since we expect DRA to translate form season-to-season better than any other pitching metric, focusing here is valuable. If you wanted one singular piece of data to retain for future use, this is the metric to understand and bookmark when evaluating pitchers.

How Do Arizona Pitchers Measure Up?

Now that we have the information in our hands, let’s run through some pitchers, starting with the standouts. It would appear that what we saw Rubby De La Rosa wasn’t a mirage, at least in terms of performance. He really did turn a corner this year before being sidelined with an elbow injury he’s currently recovering from. Andrew Chafin‘s horrific RA/9 mark isn’t indicative of his talent, and we know that. Robbie Ray is currently third in the majors in K/9 and it shows. Despite his high RA/9 and ERA, he’s been the best starting pitcher for Arizona. No wonder teams were asking for him at the deadline. The departed Brad Ziegler was good, and you knew that. Zack Greinke has been solid, especially post-April, and Archie Bradley has been an average pitcher, but has pitched better lately.

Patrick Corbin and Zack Godley haven’t been as bad as one might think. The fact that they’re tied in DRA- in the first place is a little concerning for Corbin, who’s had his share of struggles. But he also hasn’t been that bad, either. Two starts into his big league career, Braden Shipley has been below average, but that’s too small of a snapshot to read into heavily as his debut wasn’t exactly sparkling. Tyler Wagner‘s sparkling ERA from early in the season was misleading to some degree, but again, small sample size warnings are in effect.

There are too many bad pitchers to list, and that’s not a revelation. Feel free to dig through that on your own. It’s depressing and I don’t want to talk about it.

Since the team seems content to roll a similar core of position players out on Opening Day next season, the focus will be, once again, on the pitching staff. Zack Greinke will be in the fold for obvious reasons and so will Robbie Ray. A healthy and effective Rubby De La Rosa could finally change my mind about him being a reliever, but we’ll need see some positive signs before the end of September from him. Archie Bradley looks like a fine back end option, and that’s probably what Braden Shipley is in the short-term, if not long-term. Patrick Corbin has gone backwards this year as command has been troublesome for him. Zack Godley is a perfect fall-back/up-down/swingman option and Tyler Wagner can be the same. Shelby Miller is still a head-scratcher, although DRA likes his performance more than RA/9 and ERA, and we should trust that.

In the bullpen, it’s another story. Andrew Chafin and Jake Barrett are the best bets. Enrique Burgos is an all-or-nothing strikeout artist who’s best suited for righty-righty matchups in the middle innings. After that, we’re left with a confusing Daniel Hudson and little else. This team is going to need bullpen reinforcements this winter and that should be clear. Providing a platform their young relievers is perfectly acceptable for the remainder of the season, but it’s nearly impossible to see a functional bullpen from the arms they have in the mix right now. Jimmie Sherfy and Daniel Gibson could prove intriguing options, but won’t fix the firestorm that has been the D-backs’ bullpen.

What DRA can’t do is predict who will simply implode or emerge from nowhere. It can’t predict injuries, mechanical changes, new pitches learned, a rise/fall in velocity, or changes in how a repertoire is used. This is the best way to evaluate a pitcher based on what’s taken place and gives us the most confidence in predicting what will occur in the future. But there can still be wild changes. It’s just that the changes found through DRA are less extreme than the other pitching metrics.

It also paints a murky picture of what those expectations should be. Even as DRA regresses Corbin’s performance somewhat, can he regain his above average stature? Does Shelby Miller go home this winter and come back with his mechanics ironed out? Does Rubby De La Rosa pick up where he left off or have we already seen the best from him? Are any of the young relievers going to take a step forward? DRA can’t help us much here as the onus falls on the coaching staff and player development personnel running the show. While DRA gives us the best snapshot and predictions going forward, there are still plenty of questions surrounding where this team goes from here in regards to its pitching staff.

20 Responses to D-backs Pitching Through the DRA Lens: Our Cleanest Look at Talent